Guaymas is a city in the southwestern part of the state of Sonora in northwestern Mexico. The city is 242 miles from the U.S. border.

At the time Georgette made landfall, a weather observing site in Guaymas reported a sustained wind of 24 knots (26 mph) with a wind gust to 34 knots (38 mph) and a minimum central pressure of 1002 millibars. After landfall, Georgette encountered moderate wind shear from the south, which pushed the thunderstorms associated with Georgette northward, ahead of Georgette's center. Whenever thunderstorms and convection are separated or pushed away from the center of a tropical cyclone's center of circulation the storm weakens. Georgette dissipated over the high terrain of northern Mexico overnight. 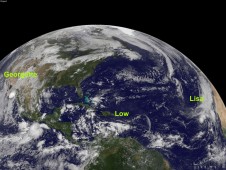 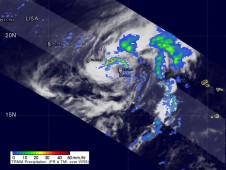 › View larger image
The Tropical Rainfall Measuring Mission (TRMM) satellite passed above Lisa on Sept. 21 at 2309 UTC (7:09 p.m. EDT) and revealed a few areas of moderate to heavy thunderstorms with rain falling at about 2 inches per hour(red) within the storm's circulation. The yellow and green areas indicate moderate rainfall between .78 to 1.57 inches per hour.
Credit: NASA/SSAI, Hal Pierce 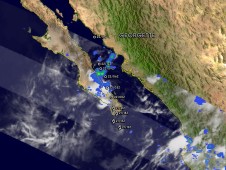 › View larger image
Georgette was a tropical depression with isolated moderate thunderstorms near the center when the Tropical Rainfall Measuring Mission (TRMM) satellite passed over on Sept. 22 at 0344 UTC. The yellow and green areas indicate moderate rainfall between .78 to 1.57 inches per hour.
Credit: NASA/SSAI, Hal Pierce The GOES-13 satellite may be stationed in orbit over the eastern U.S., but it has a wide field of view from the eastern Atlantic to the eastern Pacific, and today it captured three tropical cyclones in one image.

Tropical Storm Lisa is struggling today in the eastern Atlantic Ocean because of wind shear and dry air. Lisa was producing a small area of deep convection near the surface of her center of her circulation. The center of circulation is also exposed to outside winds, which make the storm prime for weakening. In addition, there is a lot of dry air around Lisa at the middle levels of the troposphere (likely from the Saharan dust that has been blowing off the African coast). All of those things are indicators why Lisa has not been able to intensify.

The Tropical Rainfall Measuring Mission (TRMM) satellite passed above Lisa on Sept. 21 at 2309 UTC (7:09 p.m. EDT) and revealed a few areas of moderate to heavy thunderstorms with rain falling at about 2 inches per hour within the storm's circulation.

At 11 a.m. EDT on Sept. 22, Lisa had maximum sustained winds near 45 mph. The National Hurricane Center noted that some strengthening is possible over the next 48 hours, so the environmental conditions should become more conducive for the tropical cyclone. Lisa was 435 miles west of the Cape Verde Islands, near 17.1 North and 30.5 West. It was moving very little in a southeasterly direction at 3 mph and is forecast to move little in the next couple of days. Estimated minimum central pressure is 1002 millibars.

Meanwhile, there is a low pressure area in the south-central Caribbean Sea that forecasters are watching. Today's GOES-13 satellite image does show some circulation in the clouds associated with the low. NOAA's National Hurricane Center (NHC) noted that this low has the potential to become the 15th tropical depression of the Atlantic Ocean hurricane season over the next day or two. In fact, NHC gives the low a 60 percent chance of making the grade to tropical depression in 48 hours. That low is expected to bring showers and squalls over the Netherlands Antilles and the northern coasts of western Venezuela and Colombia today.

Further west, Tropical Depression Georgette has already crossed over Baja California and is now headed to another landfall on the mainland in Mexico. A tropical storm watch is in effect for the coast of mainland Mexico from Huatabampito Northward to Bahia Kino.

When the Tropical Rainfall Measuring Mission (TRMM) satellite passed over Georgette on Sept. 22 at 0344 UTC ( Sept. 21 11:44 p.m. EDT) the tropical depression had isolated moderate thunderstorms near the center with rainfall between .78 to 1.57 inches per hour.

Georgette is a tropical depression with maximum sustained winds near 35 mph. It is located in the Sea of Cortes (the Gulf of California) and is about 85 miles south of Guaymas, Mexico. It is centered near 26.8 North and 111.0 West, with a minimum central pressure of 1000 millibars.

The depression is moving toward the north-northwest near 14 mph and is expected to turn north later today making landfall tonight. The NHC noted that "Georgette is expected to produce total rainfall accumulations of 4 to 6 inches over the western portions of the state of Sonora with isolated maximum amounts of 10 inches possible." 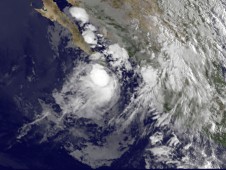 Tropical Storm-force winds will move into Baja California and the warning area later today. Georgette is going to be a big rainmaker. Total rainfall amounts between 4 to 6 inches are expected with isolated amounts to 10 inches.

At 8 a.m. EDT (5 a.m. PDT/local time) Tropical Storm Georgette had maximum sustained winds near 40 mph and is expected to weaken once it gets over land in Baja California later today. Georgette is located about 60 miles south-southeast of Cabo San Lucas, Mexico near latitude 22.1 North and longitude 109.5 West latitude. Minimum central pressure is near 1001 millibars.

Georgette is moving north-northwest near 9 mph and is expected to move over the southern Baja later today. Then, Georgette is forecast to move into the Gulf of California tonight or Wednesday and become a remnant low pressure area, quickly dissipating over mainland Mexico.