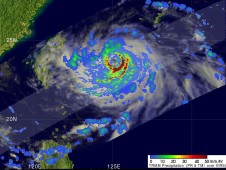 › View larger image
TRMM rainfall data on Sept. 18 at 2:53 a.m. EDT showed heavy rain (red), falling at a rate greater than 2 inches per hour, circling the Fanapi's eye, except in the north of the circulation. The yellow and green areas indicate moderate rainfall between .78 to 1.57 inches per hour.
Credit: NASA/SSAI, Hal Pierce 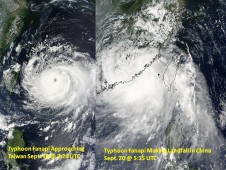 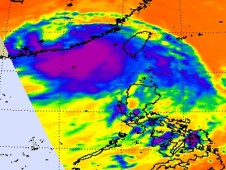 › View larger image
This infrared image of Typhoon Fanapi from the AIRS instrument aboard NASA's Aqua satellite shows that the strongest convection, strongest thunderstorms and heaviest rainfall on Sept. 20 at 05:11 UTC (1:11 a.m. EDT) were still over the South China Sea (purple).
Credit: NASA/JPL, Ed Olsen Taiwan experienced a landfall and a soaking from Typhoon Fanapi, and NASA and JAXA's TRMM satellite noted a large area of very heavy rain in the system before it made landfall this weekend. NASA's Aqua and Terra satellites also captured impressive visible images of Fanapi just before the Taiwan landfall, and as it was making landfall in eastern China very early today.

The Tropical Rainfall Measuring Mission satellite known as TRMM captured an image of Typhoon Fanapi's rainfall on Sept. 18 at 0653 UTC (2:53 a.m. EDT) after the typhoon had intensified to 105 knots (~121 mph). TRMM rainfall data showed heavy rain, falling at a rate greater than 2 inches per hour, circling the Fanapi's eye, except in the north of the circulation. Most rainfall outside of the center was falling moderately.

The Moderate Resolution Imaging Spectroradiometer (MODIS) instrument flies on both NASA's Aqua and Terra satellites and provides high resolution images of tropical cyclones, fires, ice and various other areas on Earth. This past weekend, both satellites were flying over the Pacific Northwest Ocean where Typhoon Fanapi was making landfall twice, in Taiwan and China.

Just before Fanapi made landfall, NASA's Aqua satellite captured an infrared look at the cold cloud tops of the storm. The infrared image of Typhoon Fanapi from the Atmospheric Infrared Sounder (AIRS) instrument aboard Aqua showed that the strongest convection, strongest thunderstorms and heaviest rainfall on Sept. 20 at 05:11 UTC (1:11 a.m. EDT) were still over the South China Sea and had not yet moved inland. Since that time, the heavy rainfall has moved inland.

After Typhoon Fanapi made landfall earlier today it weakened quickly. By 0900 UTC (5 a.m. EDT) Fanapi had already weakened to a tropical storm with maximum sustained winds near 56 mph. Fanapi made landfall more than 100 miles north of Hong Kong and continues to move inland in a westerly direction. The Joint Typhoon Warning Center placed the storm's center about 125 miles northeast of Hong Kong near 23.8 North latitude and 115.2 East longitude. Fanapi is expected to dissipate sometime on Tuesday, Sept. 21. 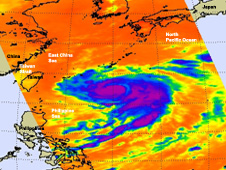 › View larger image
NASA's Aqua satellite passed over Typhoon Fanapi on September 17 at 04:45 UTC (12:45 a.m. EDT) and captured this infrared image of its cold cloudtop temperatures. The coldest cloud tops were as cold as -60F, and the imagery showed a tight center circulation.
Credit: NASA JPL, Ed Olsen Infrared satellite data from NASA's Aqua satellite revealed strong convection and a tight circulation center within Typhoon Fanapi as it heads for a landfall in Taiwan this weekend.

NASA's Aqua satellite passed over Typhoon Fanapi on September 17 at 04:45 UTC (12:45 a.m. EDT) and captured an infrared image of its cold cloudtop temperatures. The coldest cloud tops were as cold as -60F, and the imagery showed a tight center circulation at that time.

Infrared imagery today continues to show Fanapi consolidating. The typhoon is on the border of becoming a Category 2 typhoon on the Saffir-Simpson hurricane/typhoon scale. Infrared imagery also showed that Fanapi has an 11 mile-wide eye, and that there's a small gap in the eyewall in the northern part of the circulation. Because vertical wind shear is expected to increase over the next 12 to 24 hours, Fanapi is expected to weaken at that time.

Another instrument on NASA's Aqua satellite captured a visible image of Typhoon Fanapi. To see the image that the Moderate Resolution Imaging Spectroradiometer (MODIS) instrument captured of Typhoon Fanapi on September 17 at 04:45 UTC, go to: http://rapidfire.sci.gsfc.nasa.gov/gallery/?2010260-0917/Fanapi.A2010260.0445.

Fanapi is now moving northwest at 6 mph and is expected to make landfall on Sept. 19 during the morning hours local Asia/Taipei time (late Sept. 18 EDT). Fanapi is forecast to cross Taiwan from east to west and then emerge into the Taiwan Strait as a tropical storm and make a final landfall in eastern China on Sept. 20. 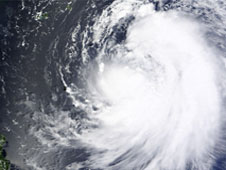 The Moderate Resolution Imaging Spectroradiometer (MODIS) on NASA’s Terra satellite captured this natural-color image of Fanapi at 10:30 a.m. Taiwan time (2:30 UTC) on September 16, 2010. Fanapi, not yet a typhoon, spans hundreds of kilometers east of Taiwan and the northern Philippines. The storm sports the comma shape characteristic of tropical storms, although it lacks a distinct eye. The JTWC forecast that Fanapi would continue its general westward track toward Taiwan and China. 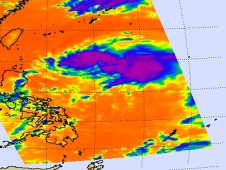 › View larger image
NASA's Aqua satellite AIRS instrument captured an infrared image of Tropical depression 12W's cloud temperatures on Sept. 15 at 0453 UTC (12:53 a.m. EDT) that showed some strong convective activity in the eastern and western quadrants of the storm as indicated by high thunderstorms (in purple) that were as cold as -63F.
Credit: NASA JPL, Ed Olsen NASA's infrared imagery watched as the twelfth tropical depression came together early today and captured some strong convection in its center.

Convection is rapidly rising air that forms the thunderstorms that power a tropical cyclone, and the Atmospheric Infrared Sounder (AIRS) instrument that flies aboard NASA's Aqua satellite captured two areas of strong convection in the eastern and western quadrants of Tropical Depression 12W today. The infrared image was captured at 0453 UTC (12:53 a.m. EDT) and showed the strong convective activity with high, cold thunderstorm cloud tops that were as cold as -63F.

Tropical Depression 12W is currently in a favorable environment for development with low wind shear and warm sea surface temperatures, so it will most likely become a tropical storm by Thursday. The current forecast keeps TD12W at sea until September 20, when it may make landfall in eastern China.