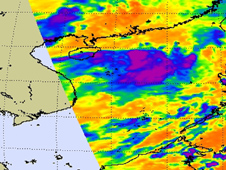 NASA and other satellite data is helping forecasters get a bead on a tropical low that looks prime for development over the weekend in the Western Pacific Ocean. Infrared imagery from NASA's Aqua satellite showed System 93W has some high, cold thunderstorm cloud tops, indicating strong convection.

The low pressure area is located near 20.4 North and 115.3 East, about 130 nautical miles southeast of Hong Kong. NASA's Aqua satellite flew over System 93W and the Atmospheric Infrared Sounder (AIRS) instrument onboard captured an infrared image of it on May 27 at 1:35 a.m. EDT (05:35 UTC). The AIRS image showed System 93W as a comma-like area of showers and thunderstorms. AIRS infrared imagery indicated there were two areas of strong thunderstorms with very high, cold cloud tops east of the center of circulation.

Winds in the area of the center of circulation were estimated to be 15 to 20 knots (17-23 mph). Recent satellite microwave imagery showed improved convective banding with a partially exposed low level circulation center (llcc) to the northeast of the deep convection. Minimum sea level pressure is estimated near 1006 millibars.

Forecasters at the Joint Typhoon Warning Center are giving this system a good chance for development in the next 24 hours.