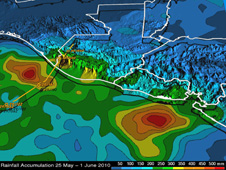 > View larger image
NASA's TRMM satellite estimated the heavy rainfall from Tropical Storm Agnes from May 25-June 1. The heaviest rains fell just off shore, along the Pacific coast side of Guatemala, El Salvador, Honduras and northwestern Nicaragua. Over 500 mm (~20 inches, shown in red) fell in two areas off the coasts of Guatemala and El Salvador. Over land, between 250 mm (~10 inches, shown in bright green) and 350 mm (~14 inches, shown in darker orange) of rain fell over the coastal areas of Guatemala and between 150 mm (~6 inches, shown in bright blue) and 250 mm fell over the coastal sections of El Salvador, Honduras and Nicaragua. Storm symbols connected by the yellow line show the path of the storm. Credit: NASA/SSAI, Hal Pierce The 2010 East Pacific hurricane season began pretty much on schedule. While the season officially begins on May 15 and runs through November 30, in an average year, the first named storm of the season forms around June 10th; this year the first storm of the season, Tropical Storm Agatha, formed on May 29 off of the coast of Guatemala from a broad area of low pressure within the Intertropical Convergence Zone (or ITCZ), a band of low pressure that circumnavigates the globe near the Equator where the trade winds converge.

Although Agatha's maximum sustained winds were never estimated to be greater than 75 kph (45 mph) by the National Hurricane Center, it still turned out to be a very deadly storm. That's because of flash floods and landslides brought about by Agatha's heavy rains.

The Tropical Rainfall Measuring Mission satellite (known as TRMM) was placed into service in November of 1997. Armed with an array of active radar and passive microwave sensors, TRMM's main objective is to measure rainfall from space. For increased coverage, TRMM can be used to calibrate rainfall estimates from other additional satellites. The TRMM-based, near-real time Multi-satellite Precipitation Analysis (TMPA) at NASA's Goddard Space Flight Center, Greenbelt, Md. is used to monitor rainfall over the global Tropics.

TMPA rainfall estimates for the 1-week period 25 May to 1 June 2010 for Central America show that the heaviest rains fell just off shore and right along the Pacific coast side of Guatemala, El Salvador, Honduras and northwestern Nicaragua. Over 500 mm (~20 inches) fell in two areas off the coasts of Guatemala and El Salvador. Over land, between 250 mm (~10 inches) and 350 mm (~14 inches) of rain fell over the coastal areas of Guatemala and between 150 mm (~6 inches) and 250 mm fell over the coastal sections of El Salvador, Honduras and Nicaragua. Storm symbols connected by the yellow line show the path of the storm. Agatha made landfall in far western Guatemala near the border with Mexico.

The storm's cyclonic circulation combined with the topography to enhance upslope flow over the coastal mountain range and squeeze out moisture. Agatha, however, was not the only source of rainfall. The ITCZ produces a great deal of rain and a lot of the rain farther south along the coast over El Salvador, Honduras and Nicaragua was mainly due to rainbands associated with the ITCZ that may have been influenced by Agatha's circulation.

So far the storm is being blamed for at least 145 deaths due almost entirely to to flash floods and landslides. Guatemala bore the brunt of the storm where 118 people were reported dead; the storm is also being blamed for an enormous sinkhole there that formed in the capital of Guatemala City. The death toll rose to 18 in Honduras with 10 reported dead in El Salvador and 1 in Nicaragua. 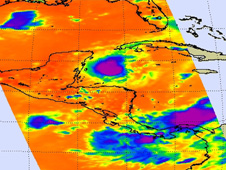 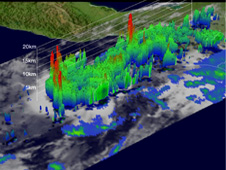 › View larger image
This image of Tropical Storm Agatha's rainfall and cloud heights was captured by NASA's TRMM satellite on May 28. It showed some hot towers higher than 16 kilometers (10 miles) with very heavy rainfall (more than 2 inches per hour) in red areas as it was making landfall. Credit: NASA TRMM, Hal Pierce Tropical Storm Agatha made landfall this weekend in El Salvador and Guatemala, and crossed into the western Caribbean. Like Agatha Christie, the famous mystery writer, Agatha was somewhat of a forecasting mystery until today.

NASA's infrared satellite data showed a strong area of thunderstorms in the middle of Agatha's remnants on June 1, but they have continued to erode and today, June 2, the mystery of possible regeneration has been solved as the National Hurricane Center gives the chance of reorganization "near zero percent."

On Wednesday, June 2 at 1231 UTC (8:31 a.m. EDT) satellite imagery from the Geostationary Operational Environmental Satellite called GOES-13 showed three areas of concentrated scattered clouds in the Caribbean. One concentrated area of cloudiness was near northwestern Cuba, a larger area of cloudiness southeast of Florida, and in the Gulf of Mexico, one area of clouds south of Louisiana. None of these areas showed any signs of development.

Looking back at May 28, when Tropical Storm Agatha was about to make landfall, NASA and the Japanese Space Agency's Tropical Rainfall Measuring Mission satellite captured rainfall rates and cloud heights of the storm. That data revealed hot towers (very strong thunderstorms around the center of circulation), higher than 16 kilometers (10 miles) with very heavy rainfall (more than 2 inches per hour) in red areas as it was making landfall.

Agatha's remnants, or the area that is now called "91L" in the Caribbean Sea doesn't appear have much of a chance of powering up to the kind of storm it was in the Eastern Pacific, and it is not a mystery anymore. 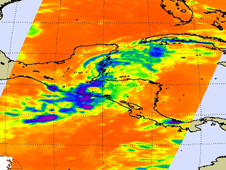 By Tuesday, June 1, Agatha's remnants had moved into the northwestern Caribbean Sea east of the Yucatan peninsula. Environmental conditions in the area, however, likely won't permit Agatha to reform into a tropical cyclone.

Over the weekend, by Sunday, May 30, Tropical Storm Agatha had already moved inland and its heavy rains left more than 100 people dead in Guatemala and El Salvador. Those rains caused flash floods and mudslides. After Agatha made landfall, the storm had been downgraded to a tropical depression.

The government in El Salvador declared a state of emergency. In Guatemala, flash floods and mudslides created by Agatha's rains forced more than 70,000 people from their homes and killed more than 20 people. The United Kingdom's Guardian newspaper reported that the flooding rains from Agatha opened a 60 meter (196 foot)-deep and 30 meter (98 foot) in diameter sinkhole in Guatemala City which reportedly swallowed up a three-story building.

On Monday, May 31, Agatha's maximum sustained winds decreased to 30 miles (46 kilometers) per hour as her remnants crossed Guatemala's western highlands and were headed into the Gulf of Mexico.

NASA's Aqua satellite flew over Tropical Depression Agatha and the Atmospheric Infrared Sounder (AIRS) instrument onboard captured an infrared image on May 31 at 3:29 a.m. EDT (7:29 UTC). Agatha appeared as stretched out over Central America from the Eastern Pacific Ocean east into the Gulf of Mexico.

By June 1, Agatha's remnants had moved into the northwestern Caribbean Sea, and were located just east of the Yucatan peninsula. The remnants were still producing intermittent showers and thunderstorms. The National Hurricane Center (NHC) noted that "Upper-level winds...particularly to the north of the system in the Gulf of Mexico are not conducive for development." As a result of the poor atmospheric conditions, the NHC only give Agatha a meager ten percent chance of becoming tropical once again.

The Eastern Pacific is likely to see its first named tropical cyclone of the hurricane season this weekend, as NASA satellite data has seen the system organize overnight from May 27 to May 28. Once named, System 90E would become "Tropical Storm Agatha."

On Friday, May 28, System 90E was located near 12.8N and 94.5W. That's 205 nautical miles south of Salina Cruz, Mexico. Infrared satellite imagery, like that of the Atmospheric Infrared Sounder instrument on NASA's Aqua satellite, shows that the low-level circulation center of 90E is consolidating. Another instrument on Aqua called the Advanced Microwave Scanning Radiometer-EOS noticed the banding of thunderstorms developing around the southern side of the low-level center. Maximum sustained winds are between 23 and 28 mph, and minimum atmospheric pressure is estimated near 1006 millibars. Forecasters at the National Hurricane Center noted that the chance for development into a tropical cyclone is "Good" in the next 24 hours. 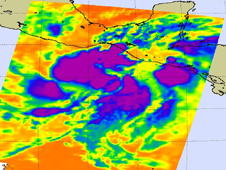 > View larger image
NASA's Aqua satellite infrared image on May 27 at 1:35 a.m. EDT showed System 90E with four areas of strong thunderstorms with very high, cold cloud tops (purple) around the center of circulation. Credit: NASA JPL, Ed Olsen The Atmospheric Infrared Sounder instrument onboard NASA's Aqua satellite captured an infrared image of a low pressure area called "90E" in the Eastern Pacific that forecasters are watching for tropical development. If the low develops it could be named Agatha.

Winds in the area are estimated to be 20 to 25 knots (23-28 mph). System 90E is trudging west at 1 mph. The Joint Typhoon Warning Center noted that System 90E "is expected to continue consolidating over the next 24-36 hours. The potential for the development of a significant tropical cyclone within the next 24 hours is good."