Tropical Storm Laila fizzled over the weekend as it tracked in a northeasterly direction over India's northeastern coast. On Monday, May 24, the remnants of Laila moved into the Bay of Bengal and the environment doesn't appear to be conducive to redevelopment, according to data from an instrument on NASA's Aqua satellite.

On May 24, Laila's remnants were located about 235 nautical miles south-southwest of Kolkata, India, near 19.0 North and 86.5 East.

On May 23 at 1955 UTC (3:55 p.m. EDT), the Advanced Microwave Scanning Radiometer - EOS (AMSR-E) instrument that flies aboard NASA's Aqua satellite noticed a poorly organized low-level inflow north of Laila's remnants. That inflow indicates moderate vertical wind shear (which can tear a storm apart) of 15-20 knots (17-23 mph). Because of the wind shear and the lack of organization in the convection (rapidly rising air that form the thunderstorms that power a tropical cyclone), forecasters at the Joint Typhoon Warning Center give Laila a poor chance of regenerating. 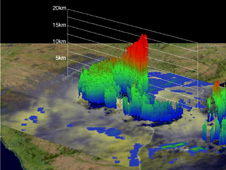 This 3-D image of Cyclone Laila was made using data from TRMM's Precipitation Radar. It shows that the powerful thunderstorms northwest of tropical cyclone Laila shot up to heights above 17.5 kilometers (~57,415 feet/10.8 miles). Credit: NASA/SSAI, Hal Pierce
› Larger image 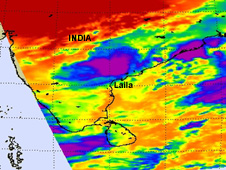 The Atmospheric Infrared Sounder instrument on NASA's Aqua satellite captured an image of the waning Laila over southeastern India on May 21 at 3:53 a.m. EDT. The purple indicates remaining strong thunderstorms. Credit: NASA JPL, Ed Olsen
› Larger image A NASA 3-D look inside Cyclone Laila as it made landfall yesterday revealed a towering thunderstorm reaching almost 11 miles high! NASA's Tropical Rainfall Measuring Mission (TRMM) satellite has been capturing images of Cyclone Laila since it was born in the Northern Indian Ocean as tropical depression 1A earlier this week.

Scientists at NASA can use TRMM data to provide meteorologists a 3-D look at the storm's cloud heights and rainfall, which are extremely helpful in forecasting.

"One of the interesting capabilities of the TRMM satellite is its ability to see through clouds with its Precipitation Radar (PR) and reveal the 3-D structure within storms such as Cyclone Laila," said Hal Pierce, on the TRMM mission team in the Mesoscale Atmospheric Processes Branch at NASA's Goddard Space Flight Center, Greenbelt, Md.

Laila brought nine-foot high waves and very heavy rains before it made landfall near the town of Bapatla which lies on the southeast coast of India. The Associated Press reports that 23 deaths have been attributed to the storm. Meanwhile, state officials reported widespread damage, downed trees, power outages, and flooding.

On May 21 at 1200 UTC (8 a.m. EDT), Laila had weakened into a depression as a result of tracking over the rugged terrain of southeastern India. At 8 a.m. EDT Laila's maximum sustained winds had waned to near 38 mph. It was located about 115 nautical miles west-southwest of Visakhapatnam, India and headed in that direction. It was moving north-northeast near 6 mph (5 knots). Widespread heavy rain and gusty winds can be expected from Andhra Pradesh today, and to areas northeast through the weekend as Laila tracks in that direction. For the most recent updates on Laila, go to the India Meteorological Department web site at: www.imd.gov.in/.

Laila is now a depression and is forecast to track in a northeasterly direction over the weekend, bringing moderate to heavy rains to the northeastern coast of India, as it heads to Bangladesh. The Joint Typhoon Warning Center expects Laila's remnants to emerge over the northern Bay of Bengal, intensify slightly and then dissipate before reaching southeastern Bangladesh. Forecasters will be keeping a close eye on the storm over the weekend.

TRMM captured the image of Laila's rainfall (left) on May 20 at 0714 UTC (3:14 a.m. EDT) after it made landfall in India. The red area in the center of the storm shows heavy rainfall of over 50 millimeters (~2 inches) per hour. The yellow and green areas indicate moderate rainfall between .78 to 1.57 inches per hour. The image on the right shows the "hot tower" that reaches as high as 15 kilometers. Credit: NASA/SSAI, Hal Pierce
› Larger image

NASA's Tropical Rainfall Measuring Mission or TRMM satellite captured a satellite image of Laila's rainfall and revealed some areas of heavy rainfall in addition to a "hot tower."

TRMM not only measures rainfall intensity from space but can also give scientists an idea about the height of a thunderstorm that is generating the rainfall within the tropical cyclone. Tropical cyclones are made up of hundreds of thunderstorms.

A "hot tower" is a rain cloud that reaches at least to the top of the troposphere, the lowest layer of the atmosphere. It extends approximately nine miles (14.5 kilometers) high in the tropics. These towers are called "hot" because they rise to such altitude due to the large amount of latent heat. Water vapor releases this latent heat as it condenses into liquid.

On May 20 at 0714 UTC (3:14 a.m. EDT) TRMM flew over Laila after it made landfall in India and captured an image of its rainfall rates. The heaviest rainfall appeared just southeast of the center of circulation, and over land (along the coast). That area was generating rainfall of about 2 inches per hour.

At 9:00 UTC (5 a.m. EDT) Laila had maximum sustained winds near 50 knots (57 mph). The center of Tropical Storm Laila was close to the town of Bapatla. Bapatla is one of the historical towns and mandals of Guntur District (Andhra Pradesh) located 40 miles south of Guntur City on the East Coast of India. It is also about 220 nautical miles west-southwest of Visakhapatnam, near 16.0 North and 80.1 East.

Laila was moving north-northwestward at 10 knots (12 mph). The Joint Typhoon Warning Center noted that as Laila "follows this path it will encounter the rugged terrain of northeastern Andhra Pradesh and weaken. However, a formidable remnant low is expected to reemerge over the northern Bay of Bengal after 72 hours and accelerate east-northeastward toward eventual landfall over or near south-eastern Bangladesh."

Residents along coastal areas of Andhra Pradesh and Telangana in other areas in Laila's path can expected widespread heavy rainfall and gusty winds. Seas will also be rough, and fishermen were advised by the India Meteorological Department to stay out of the ocean.

For forecast updates from the India Meteorological Department, visit:
www.imd.gov.in/section/nhac/dynamic/cyclone.htm


05.19.10
Cyclone Laila, Formerly Tropical Storm 1B, is Headed for Landfall in India 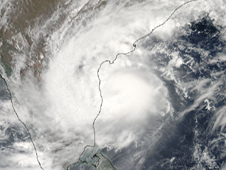 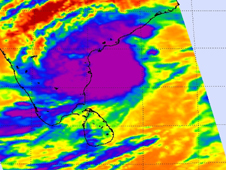 The AIRS instrument on NASA's Aqua satellite captured an infrared image of Laila and showed that the higher, colder, more powerful thunderstorms (purple) were still over the Bay of Bengal and mostly in the eastern half of the storm. Credit: NASA/JPL/Ed Olsen
› Larger image Tropical Storm 1B strengthened overnight into a Category One cyclone on the Saffir-Simpson scale and has been officially renamed "Laila." NASA's Aqua satellite captured a visible image of Laila today, May 19, revealing that the storm has organized overnight and is already affecting coastal areas of southern India.

The Moderate Resolution Imaging Spectroradiomenter or MODIS instrument that flies aboard Aqua captured Laila in an image at 08:10 UTC (4:10 a.m. EDT). At that time, Laila had reached cyclone strength with maximum sustained winds near 74 mph. It was located about 70 nautical miles east-northeast of Chennai, India, near 13.9 North latitude and 91.3 East longitude. Laila is moving northwestward near 7 mph (6 knots).

The Atmospheric Infrared Sounder (AIRS) instrument that also flies aboard NASA's Aqua satellite captured an infrared image of the cloud-top temperatures in Laila at the same time. The image showed that the higher, colder, more powerful thunderstorms were still over the Bay of Bengal and mostly in the eastern half of the storm. In addition, there were some high, strong thunderstorms over land.

Forecasters at the India Meteorological Department noted in an advisory on May 19, "the system is likely to intensify further and move in a northwesterly to northerly direction and cross Andhra Pradesh Coast between Nellore and Kakinada, close to Machilipatnam by morning of may 20." For updates on Watches and Warnings along the India coast, visit the India Meteorological Department's web site at: http://www.imd.gov.in/

The Joint Typhoon Warning Center, the organization that forecasts for tropical cyclones in the Northern Indian Ocean, noted that Cyclone Laila is expected to make landfall near 2 p.m. EDT on Thursday and gradually weaken as it tracks along the southeast coast of India. Its track will take it toward Bangladesh and over the northern Bay of Bengal by Saturday, May 22. 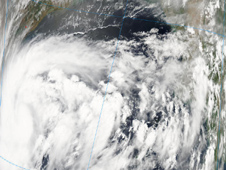 > View larger image
NASA's Aqua satellite captured a visible image of Tropical Storm 1B (lower left) soon after it formed. This image from the MODIS instrument onboard Aqua was taken at 7:25 UTC (12:25 p.m. Asia/Kolkata time) and shows 1B off the east coast of India.
Credit: NASA Goddard / MODIS Rapid Response Team NASA's Aqua Satellite Sees Tropical Storm 1B Form in Bay of Bengal

The first tropical storm of the Northern Indian Ocean cyclone season has formed and NASA's Aqua satellite captured its birth. Tropical Storm 1B formed in the early morning hours as the convection around the low level circulation center increased since May 17.

NASA's Aqua satellite captured a visible image of 1B from the Moderate Resolution Imaging Spectroradiometer (MODIS) at 7:25 UTC (12:25 p.m. Asia/Kolkata time) today, May 18, where if formed off of India's east coast in the Bay of Bengal.

At 09:00 UTC (5 a.m. EDT or 2 p.m. Asia/Kolkata local time) on May 18, Tropical Storm 1B had maximum sustained winds near 40 knots (46 mph). It was located about 285 nautical miles east-southeast of Chennai, India near 12.4 North and 84.5 East in the Bay of Bengal. It is moving west-northwest near 13 knots (15 mph) and is forecast to continue in that direction, according to the Joint Typhoon Warning Center, the organization the forecasts tropical cyclones in that region.

Tropical Storm 1B is expected to intensify in the next two days as it moves closer to Chennai. It is then forecast to make landfall south of Visakhapatham.