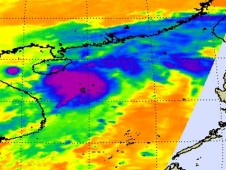 › View larger image
NASA's Aqua satellite passed over Tropical Depression 14W on October 5 at 18:17 UTC (2:17 p.m. EDT) and captured this infrared image of its cloud-top temperatures as cold as or colder than -63F (purple). The small tropical depression was over Hainan Island, China and is now dissipating.
Credit: NASA/JPL, Ed Olsen Infrared satellite imagery from NASA's Atmospheric Infrared Sounder (AIRS) instrument provided forecasters with a look at the waning convection happening inside Tropical Depression 14W as it lingers and fizzles out near Hainan Island, China today. There are three environmental factors that are bringing an end to Tropical Depression 14W, two in the atmosphere, and one in the ocean.

Infrared satellite imagery on Oct. 5 and Oct. 6 showed a big decrease in Tropical Depression 14W's (TD14W) convection. That's significant, because convection is the rapidly rising air that forms the thunderstorms that power a tropical depression, tropical storm or hurricane. Without that power, the storm fizzles. That's what's happening to TD14W.

When NASA's Aqua satellite flew over the storm from space on October 5 at 18:17 UTC (2:17 p.m. EDT), the AIRS instrument aboard the spacecraft captured infrared imagery of its cloud-top temperatures. At that time, there was a small area of cloud tops that were as cold as or colder than -63F, but they've warmed since then and the strong convection is almost gone. Warming cloud tops indicate cloud tops are less high than they were before, and less uplift, or force in warm rising air to form thunderstorms. Satellite imagery has also shown that the low-level circulation center is poorly defined, and the storm was falling apart.

The three environmental factors that are working to dissipate whatever is left of TD14W today, Oct. 6, are increasing wind vertical shear, a layer of dry air blowing in on easterly winds from Hong Kong, and cooler sea surface temperatures. Those three factors are "enemies" to maintaining a tropical cyclone and TD14W is rapidly dissipating. 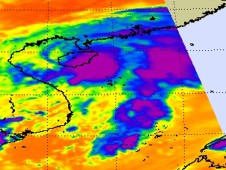 › View larger image
The AIRS instrument on NASA's Aqua satellite revealed a concentrated area of thunderstorms and strong convection (purple) around TD14W's center (directly over Hainan Island, China) in the eastern quadrant of the storm. Cloud top temperatures were as cold as -60 Fahrenheit in the purple areas. The convection in the east is a result of westerly wind shear blowing the convection and thunderstorms away from the storm's center.
Credit: NASA/JPL, Ed Olsen 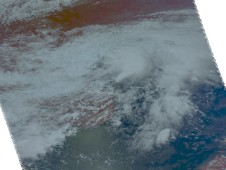 › View larger image
This visible image of TD14W shows the concentrated area of thunderstorms around the center of the system as a rounded area. The other thunderstorms that have been blown east of the center appear to the left.
Credit: NASA/JPL, Ed Olsen The northwestern Pacific Ocean is just as active as the Atlantic Ocean this hurricane season. The fourteenth tropical depression formed near Hainan Island, China this morning and its birth was captured by a NASA infrared satellite instrument. The NASA image showed the depression's strong thunderstorms near its center and east of its center.

NASA's Aqua satellite flew over Tropical Depression 14W (TD14W) today, October 5 at 06:05 UTC (2:05 a.m. EDT). Infrared imagery from the Atmospheric Infrared Sounder (AIRS) instrument onboard the Aqua satellite revealed a concentrated area of thunderstorms and strong convection (rapidly rising air that forms thunderstorms that power a tropical cyclone) around TD14W's center in the eastern quadrant of the storm. That convection in the east is a result of westerly wind shear blowing the convection and thunderstorms away from the storm's center.

Infrared imagery also indicated that those storms are weakening, because the cloud tops are now warming from previous imagery. Very cold thunderstorm cloud tops (colder than -60 Fahrenheit) indicate strong thunderstorms, very high into the troposphere, that likely have heavy rain associated with them. When AIRS detects that cloud top temperatures have warmed, it means the heights of the thunderstorms has dropped, meaning there's not as much power or uplift in the convection.

AIRS imagery also showed a poorly-defined low-level center of circulation in TD14W, and some of that deep convection (or thunderstorms) are pushed away from the eastern side of the center. That indicates wind shear (winds that buffet a storm and push it apart). When a storm doesn't stack up, and when part of the storm is displaced from the rest of it, it loses its organization and punch. That's what wind shear does, and is doing to TD14W and that wind shear is blowing at about 28 mph!

At 5 a.m. EDT, October 5, Tropical Depression 14W had maximum sustained winds near 34 mph. It was located over Hainan Island near 19.5 North and 109.4 East. Its winds were creating 9-foot high seas. TD14W was moving north at 6 mph. It is expected to make a turn to the north-northeast, make a brief landfall in the mainland of southern China. Once there, it is forecast to move east, then east-southeast, making a half-circle and head toward the eastern end of Hainan Island and dissipate.