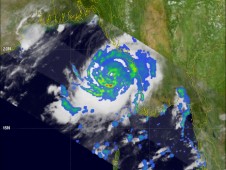 Giri is the second tropical cyclone of 2010 to form in the Bay of Bengal and was seen by the Tropical Rainfall Measuring Mission (TRMM) satellite. Cyclone Giri was seen clearly by the TRMM satellite twice on Oct. 21. The first good view was at 1534 UTC (11:34 a.m. EDT) when TRMM data showed a very well organized storm with heavy rainfall south of Giri's partially formed eye. The heaviest rainfall was falling at about 2 inches per hour, south of Giri's eye. The rainfall analysis was done at NASA's Goddard Space Flight Center, Greenbelt, Md.

The second TRMM orbit at 2347 UTC (7:47 p.m. EDT) captured Giri's rainfall when the wind speeds had increased to 85 knots (98 mph) making it a category two tropical cyclone on the Saffir-Simpson scale. The second TRMM image showed that Giri had developed a closed eye surrounded by powerful thunderstorms dropping heavy rainfall. Cyclone Giri then intensified to a category four tropical cyclone with wind speeds estimated at 125 knots (~144mph) before striking Burma's west coast in the middle of the morning.

Satellite data also indicated that as Giri was making landfall, that it had a well-defined eye about 20 nautical miles wide. High waves, coastal erosion, severe winds of Category four hurricane force and very heavy rainfall are all being experienced along coastal areas of Hunters Bay and Combermere Bay. As Giri moves inland over the rugged terrain of Myanmar it will rapidly weaken and drop large amounts of rain. 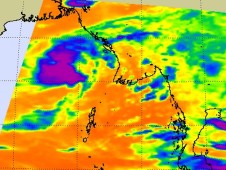 › View larger image
NASA's Atmospheric Infrared Sounder (AIRS) instrument captured an image of Tropical Depression 04B's cloud top temperatures on Oct. 20 at 18:35 UTC (2:35 p.m. EDT). The coldest temperatures appear in purple (over the Bay of Bengal) and are as cold as or colder than -65 Fahrenheit (-53 C).
Image Credit: NASA/JPL, Ed Olsen Tropical Depression 04B formed in the Northern Indian Ocean and has quickly strengthened into a tropical storm today. The AIRS instrument on NASA's Aqua satellite captured an image of Tropical Storm 04B's cloud top temperatures as it was forming yesterday.

NASA's Aqua satellite's Atmospheric Infrared Sounder (AIRS) instrument captured an image of then Tropical Depression 04B's cloud top temperatures on Oct. 20 at 18:35 UTC (2:35 p.m. EDT) and saw they had grown colder and higher than they were earlier in the day. Colder cloud tops indicate stronger convection that created those higher, stronger thunderstorms. Cloud top temperatures were as cold as or colder than -65 degrees Fahrenheit (-53 Celsius). Tropical Depression 04B remained over the eastern Bay of Bengal at the time of the image, and the heavy precipitation was all occurring over the open waters.

At 0900 UTC (5 a.m. EDT) on Oct. 21, Tropical Storm 04B had maximum sustained winds near 45 knots (49 mph). It was located about 295 nautical miles south of Chittagong, Bangladesh, near 17.6 North and 91.9 East. It is moving northeast at 3 mph. It is in warm waters and the wind shear is light, so it is expected to strengthen quickly into a Cyclone.

It is expected to make landfall in Burma tomorrow, October 22, so preparations need to be made quickly.