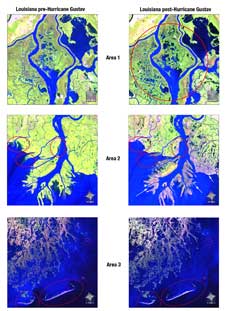 NASA satellites have many applications, including observations to improve understanding of the global integrated Earth system, improve forecasts of hurricanes, and help federal and state agencies assess damages produced by natural hazards such as hurricanes. Landsat 5 produces 185-kilometer (115 mile) images with a 30-meter (98 feet) ground sampling size that can discern areas changed by hurricanes and tropical storms. Landsat 5 can capture imagery of a given geographic location every 16 days.

After Hurricane Gustav made landfall on September 1, 2008, Landsat data provided picture-proof that wetlands and barrier islands off the Louisiana coast, southwest of New Orleans, were lost from hurricane-related flooding. 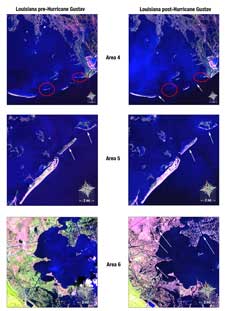 In order to make certain aspects of the land stand out, scientists use false color. Information from the infrared and green portions of the electromagnetic spectrum were recorded by Landsat and put together to create these false color images. In these false color images, "vegetated areas look green, bare or low vegetation areas looks pink to white, and water bodies blue to dark blue," said Landsat Project Science Office scientist Dr. Eric Brown de Colstoun. "Wetlands or flooded vegetation are typically purple in color in theses images."

At 9:30 a.m. CDT (10:30 a.m. EDT) on September 1, Hurricane Gustav made landfall along the Louisiana coast near Cocodrie, La. as a strong Category 2 hurricane. It was 1 mph below Category 3 strength and dropped to a Category 1 storm four hours later. By the next day, it had been downgraded to a tropical depression. Thereafter, Gustav continued moving northwest through Louisiana and finally into Arkansas on September 3. According to the National Hurricane Center, as of September 15, 138 deaths had been attributed to Gustav in the U.S. and Caribbean. Gustav caused up to $15 billion in damages in the U.S. and $3 billion in damages when it raked over Cuba. 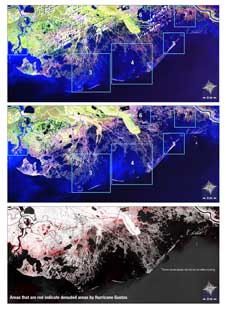 Landsat satellites have taken specialized digital photographs of Earth’s land cover and surrounding coastal regions since 1972, enabling the study of many aspects of the global integrated Earth system and evaluation of changes caused by both natural processes and human practices.