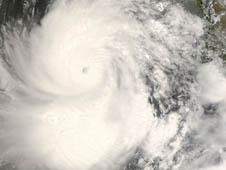 In early May 2008, Cyclone Nargis passed over Burma (Myanmar) after forming in the Bay of Bengal.
> Full image and caption
> Browse version of image
A "pre-existing condition" in the North Indian Ocean stoked the sudden intensification of last year's Tropical Cyclone Nargis just before its devastating landfall in Burma, according to a new NASA/university study. The cyclone became Burma's worst natural disaster ever and one of the deadliest cyclones of all time.

Scientists at the National Taiwan University, Taipei; and NASA's Jet Propulsion Laboratory, Pasadena, Calif., used data from satellite altimeters, measurements of ocean depth and temperature and an ocean model to analyze the ocean conditions present at the time of the catastrophic storm. Nargis intensified from a relatively weak category 1 storm to a category 4 monster during its final 24 hours before making landfall on May 2, 2008.

Lead author I-I Lin of National Taiwan University and her team found the ocean conditions Nargis encountered created the perfect recipe for disaster. Cyclones thrive on warm layers of ocean water that are at least 26 degrees Celsius (79 degrees Fahrenheit). As they traverse the ocean, they typically draw deep, cold water up to the ocean surface, a process that limits their ability to strengthen, and even weakens them as they evolve. However, Nargis passed over a pre-existing warm ocean feature in the Bay of Bengal where upper ocean warm waters extended deeper than normal, from 73 to 101 meters (240 to 331 feet).

"This abnormally thick, warm water layer, which formed about a month earlier, kept deeper, colder waters from being drawn to the surface, increasing the energy available to fuel Nargis' growth by 300 percent," said Lin. "Combined with other atmospheric conditions conducive to strengthening, this warm ocean feature allowed Nargis to reach speeds of 115 knots [213 kilometers, or 132 miles, per hour] at landfall. Had Nargis not encountered this warm ocean feature, it would likely not have had sufficient energy to intensify rapidly."

Nargis' rapid intensification occurred predominantly over warm ocean regions where sea surface temperatures ranged between 30 and 30.2 degrees Celsius (about 86 degrees Fahrenheit) and sea surface heights ranged from 6 to 20 centimeters (2.4 to 7.9 inches) above normal. Between May 1 and 2, 2008, the storm intensified from category 1 to category 4. When Nargis briefly passed outside the warm ocean region on May 2, it weakened somewhat, only to strengthen once again as it returned to the warm ocean feature. Warm ocean features in the Gulf of Mexico contributed to the rapid intensification of hurricanes Katrina and Rita in 2005.

Lin said the research will contribute to improving our understanding of and ability to forecast catastrophic events like Nargis in the future, reducing loss of life and property. "Such a capability is particularly needed in developing countries, where less advanced cyclone monitoring and warning systems can leave people with little time to escape from disaster," she said.

"This research demonstrates a significant potential benefit of using altimeter data for operational weather forecasting and tropical cyclone intensity predictions," said study co-author Tim Liu of JPL. "Current hurricane analyses include variations in ocean heat, which can be revealed by ocean altimeters. Satellites like NASA's Jason-1 and Ocean Surface Topography Mission/Jason-2 make important contributions to the operational monitoring and prediction of tropical cyclones, as have other NASA satellites."

Results of the study were published this month in Geophysical Research Letters.

JPL is managed for NASA by the California Institute of Technology in Pasadena. Media contact: Alan Buis 818-354-0474
Jet Propulsion Laboratory, Pasadena, Calif.
Alan.buis@jpl.nasa.gov
› Back To Top