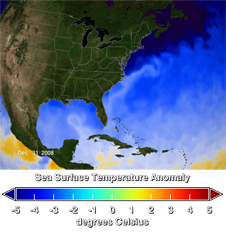 General positions of the polar and pacific jet streams during La Niña in the winter, although this year the blue (Northern) jet stream dipped further south in the eastern U.S. Credit: NOAA
> Larger image 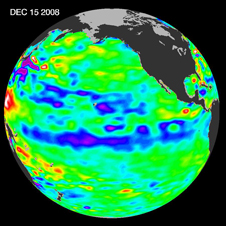 The Jason-1 satellite image of sea surface height from Dec 15, 2008 also shows the La Niña, as well as a negative PDO signal. The blue area depicts cooler water and lower sea surface heights. Credit: NASA JPL
> Larger image La Niña conditions are likely to continue in the Northern Hemisphere during the spring of 2009. That's the forecast from the National Oceanic and Atmospheric Administration's (NOAA) Climate Prediction Center, National Center for Environmental Prediction and National Weather Service in their official statement on January 8, 2009.

Knowing La Niña conditions is an important factor to hurricane researchers at NASA and hurricane forecasters at NOAA's agencies. La Niñas do have an influence on the Atlantic Ocean hurricane season.

"La Niña shifts the high-altitude weather highway known as the 'jet stream,'" said Bill Patzert, a climatologist at NASA's Jet Propulsion Laboratory, Pasadena, Calif. "It funnels storm tracks to the Pacific Northwest, which has resulted in heavy rainfall and lots of snow in that region so far, as well as in the upper Midwest. La Niña often gives the upper Midwest and the Northeast a fierce winter. Much of the Southwest, by contrast, will be shielded from stormy weather and, as a result, is expected to receive significantly less precipitation than normal." Patzert calls La Niña "the diva of drought" for the U.S. Southwest.

La Niña is signaled by wind shifts and cooler waters in the eastern Pacific. NOAA found that the negative (cooler) equatorial SST anomalies strengthened across the central and east-central Pacific Ocean during December 2008.

The NOAA report further noted that "The subsurface oceanic heat content anomalies (average temperatures in the upper 300 meters (about two-tenths of a mile) of the ocean) became increasingly negative as below-average (cooler) temperatures at thermocline depth strengthened in the central and eastern Pacific."

The thermocline is a thin but distinct layer in a large body of water, like an ocean, where temperature changes more rapidly with depth than it does in the layers above or below. In the ocean, the thermocline is like a layer that separates the upper mixed layer of the ocean's surface from the calm deep water below.

While the magnitude of cooling remains uncertain, NOAA’s official La Niña threshold will likely be met during January-March 2009 (3-month average). The report concludes that based on current observations, recent trends, and model forecasts, La Niña conditions are likely to continue into the Northern Hemisphere Spring 2009.

"In realizing the effect of La Niña on hurricanes, you're actually removing an impediment for hurricane formation," said David Adamec, Oceanographer at NASA's Goddard Space Flight Center, Greenbelt, Md. "During these events, the jet streams have a harder time making it south into the hurricane formation regions, so the wind shear (winds that tear a storm apart) is often weaker and allow hurricanes a better chance of formation."