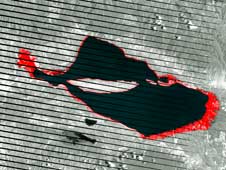 > Click for larger image
Two Landsat satellite images over-lapped, taken before and after hurricane season 2008, show the rise in waters (in red) of the Dominican Republic's Lake Enriqullo. Credit: NASA/Landsat, Mike Taylor In 2008, residents of Hispaniola experienced one of their worst hurricane seasons in recent memory. Hispaniola, the Caribbean island containing Haiti and the Dominican Republic, is located directly within the hurricane belt, and was pummeled by five tropical cyclones last year: Fay, Gustav, Hanna, Ike, and low over the Dominican Republic on Sept. 24 what would become Kyle after moving north. More than 800 people were reported dead or missing from these storms.

Haiti occupies the western third of Hispaniola, while the Dominican Republic covers the eastern two-thirds. Hispaniola is the second-largest and most populated island of the Antilles. It's located between Cuba to its west, and Puerto Rico to its east.

Hispaniola, famous as Columbus' first stop in the "New World" in 1492, has often been the target of Atlantic hurricanes. In 1979 Hurricane David claimed more than a thousand lives. On this mountainous island, landslides and flooding are usually the major causes of destruction. "Located right in the center of 'hurricane alley,' Hispaniola has a long and brutal history of hurricane destruction," notes climatologist Bill Patzert, Climatologist at NASA's Jet Propulsion Laboratory, Pasadena, Calif. "Haiti, one of the poorest countries in the Western Hemisphere, suffers from severe environmental degradation which makes hurricane landfalls especially damaging and deadly," Patzert added.

Lake Enriqullo, located in the southwestern corner of the Dominican Republic, increased in size from all of the rainfall from the 2008 tropical cyclones. Two satellite images captured by the Landsat satellite show the lake's increase in size. Landsat is a joint NASA / U.S. Geological Survey series of Earth-observing satellites that's been in operation since 1972. The image above was created by comparing a Landsat 7 image from August 2, 2007 with an image from August 20, 2008. The red area shows where the lake has expanded. The comparison reveals that the lake has increased in size, especially along its eastern- and westernmost edges, and the reduced surface area of Lake Enriqullo's central island indicates greater water volume.

Fay was an unusual tropical cyclone because it had eight landfalls, four of them in Florida alone. Fay's torrential rainfall caused extensive floods across the Dominican Republic, Haiti, Cuba, and Florida. After a landfall in Hispaniola on Aug. 15, and despite its course over the mountainous southern portion of the Dominican Republic and Haiti, Fay remained a tropical storm. According to the National Hurricane Center's final report on Fay, "Water levels in reservoirs had been running low and water restrictions were about to be implemented. Fay’s motion across the northern Caribbean Sea produced prolonged heavy rain events in Hispaniola and Cuba. News reports indicate that floods devastated the Haitian island of Gonavé. The saturated ground conditions created by the heavy rains from Fay set the stage for an even greater flood devastation and resultant loss of life caused by heavy rains produced by Hurricanes Gustav, Hanna, and Ike that traversed Haiti during the ensuing two weeks. In the Dominican Republic, rainfall totals exceeding 7-10 inches occurred primarily over the southern half of the country."

Hurricane Gustav crossed onto Haiti's southern peninsula on Aug. 26, 2008 as a Category 1 storm with 70 mph winds that killed at least one person. Gustav's rains caused a landslide near the Haitian town of Brazillienne, and floodwaters split the town of Jacmel in half where it made landfall. According to the National Hurricane Center's final storm report, "Heavy rainfall and widespread freshwater flooding occurred along the path of Gustav. Camp Perrin, Haiti reported a storm total rainfall of 10.75 inches, while Baharona, Dominican Republic reported a storm total rainfall of 9.71 inches." Gustav had formed only one day before about 260 miles southeast of Port-au-Prince, Haiti.

Just one week later on Sept. 3, Tropical Storm Hanna dumped very heavy rainfall totals of much of Hispaniola and Puerto Rico as its center passed just north and northwest of those islands. The maximum rainfall reported in the Dominican Republic was 14.17 inches at the town of Oviedo. Haitian residents were forced onto rooftops to avoid serious flooding. Haiti's deforested hillsides were the victim of mudslides from torrential rains. Hanna had killed 21 people and cut off the city of Gonaives with flood waters. 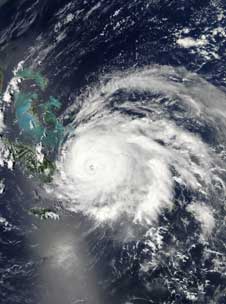 Hurricane Ike bore down on Cuba after roaring across low-lying islands on Sept. 7 tearing apart houses, wiping out crops and worsening floods in Haiti that had already killed more than 300 people. Heavy rains also pelted the Dominican Republic, Haiti's neighbor on the island of Hispaniola, where about 4,000 people were evacuated from northern coastal towns.

According to the National Hurricane Center's final report on Ike, "Parts of Hispaniola, especially Haiti, were devastated by widespread flooding and mud slides from four consecutive impacts by Tropical Storm Fay and Hurricanes Gustav, Hanna, and Ike. Overall, 793 people died in Haiti from the four storms, with another 300 people reported missing. It is estimated that 74 deaths are directly attributable to the effects of Ike. Ike exacerbated the humanitarian disaster in Haiti, wiping out the food supply, shelter, and transportation networks across the nation. Two deaths have been reported in the Dominican Republic."

NASA's Tropical Rainfall Measuring Mission (TRMM) satellite has been measuring rainfall from space ever since it was launched in November 1997. The TRMM analysis above shows a complete history of rainfall with Hurricane Ike from when it was named on Sept. 1, 2008, through Sept. 15, 2008. 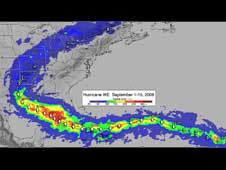 > Click for larger image
TRMM image of Ike's rainfall path. Credit: NASA/SSAI, Hal Pierce Ike caused flooding almost every time it was near or over land. The analysis shows that Hispaniola received between 100 and 200 mm (between 4 and 8 inches) of rainfall. Most of Cuba received more than 150 mm (~6 inches) with some areas showing totals averaging above 250 mm (~10 inches), and areas of southeast Texas received heavy rainfall—above 200 mm (close to 8 inches). Ike moved very quickly toward the northeast after leaving Texas but was still responsible for flooding in Missouri, Illinois and Indiana.

The low pressure system that ambled its way slowly over the Dominican Republic on Sept. 23–24 became Kyle after leaving Hispaniola. According to the National Hurricane Center report on Kyle, "The low took two days to cross the island, producing disorganized thunderstorms and a large area of squalls within a convective band over the adjacent Caribbean Sea." It became a tropical depression on Sept. 25, 100 miles north of the Dominican Republic and later became Kyle. Over Hispaniola, the low brought heavy rains, flash floods and mud slides.

While residents of Hispaniola are hoping for a calmer hurricane season in 2009, NASA satellites will be keeping a close eye on the Atlantic Ocean basin.