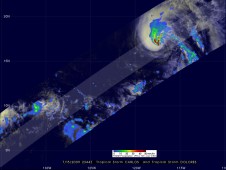 It's not too often that two tropical cyclones are close enough to each other to be within a satellite's view as it tracks far above the Earth, but it happened this week with Carlos and Dolores in the Eastern Pacific Ocean.

The Tropical Rainfall Measuring Mission (TRMM) satellite, which is managed by NASA and JAXA, the Japanese Space Agency captured a two-for-one image of both tropical cyclones in one satellite image!

TRMM images from TRMM's Precipitation Radar instrument show the horizontal pattern of rain intensity within storms. The false-colored areas in yellow and green indicate rainfall between 20 and 40 millimeters (.78 to 1.57 inches) per hour. The false-colored red area indicates moderate rainfall over 50 mm/hour or ~2 inches per hour.

It was a rare "photo opportunity," because less than 24 hours later, by 5 p.m. EDT on July 16, Carlos had weakened into a remnant low pressure area and appeared as a "poorly-defined low-level swirl in the Inter-Tropical Convergence Zone (known as the ITCZ). The remnant that was Carlos will continue moving westward and fade away later today, July 17. Meanwhile, Dolores had also already faded to a tropical depression and will be a memory later today as well. 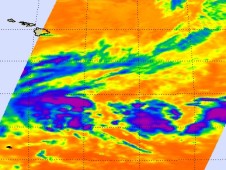 > View larger image
This AIRS Infrared image from July 16 shows cold high clouds (in blue) from Carlos are in three widespread areas and the eastern-most area is where the storm's center is located.
Credit: NASA JPL, Ed Olsen Carlos Weakens to a Tropical Depression, Going "Low-er"

After achieving a category two hurricane status for a short period of time, Carlos has now weakened to a tropical depression and is expected to weaken further to a remnant low pressure area in the next day.

According to the National Hurricane Center in a discussion on July 16 at 11 a.m. EDT," Carlos has a small and poorly-defined low-level circulation but is still producing some deep convection. The system is on the verge of becoming a remnant low...and will likely be declared as such later today."

At that time, Tropical Depression Carlos was about 1890 miles west-southwest of the southern tip of Baja California, near latitude 9.8 north and longitude 135.0 west. Carlos' sustained winds are down to 30 mph and its weakening. The depression is moving toward the west near 16 mph and it will keep going that way for the next two days. Estimated minimum central pressure is 1005 millibars.

Satellite imagery from NASA's Atmospheric Infrared Sounder (AIRS), an instrument that flies aboard NASA's Aqua satellite looked at Carlos' remaining cold high clouds and thunderstorms. AIRS captured an infrared image of the depression's scattered showers on July 16 at 7:35 a.m. EDT. In the image, cold high clouds are in three areas, and the eastern-most area is where the storm's center is, despite clouds and precipitation widespread from the center. Carlos' strength is weakening and he'll "reach a new low" soon, as a remnant low pressure area. 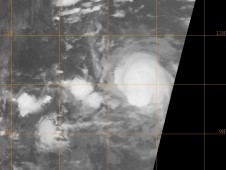 > View larger image
NASA's Aqua satellite captured in image of Hurricane Carlos' clouds during the early morning on July 15 as it weakened back to a Category One Hurricane.
Credit: NASA/NRL Hurricane Carlos Stronger then Weaker

Carlos is still on a westward track in the open waters of the Eastern Pacific Ocean, but after a burst of strength overnight, has begun to weaken. That's a sign of what's to come.

Late Tuesday night, July 14 at 11 p.m. EDT, Carlos strengthened. His maximum sustained winds reached 105 mph, and stayed there until today at 11 a.m. EDT when they settled at 85 mph. For 12 hours, Carlos was a Category 2 hurricane on the Saffir-Simpson Scale, and is again a Category One hurricane.

At 11 a.m. EDT July 15, Carlos was now 1,560 miles west-southwest of the southern tip of Baja California near 10.3 north latitude and 129.5 west longitude. He was moving west near 6 mph and is expected to speed up in the next couple of days. Estimated minimum central pressure was 978 millibars.

The Moderate Resolution Imaging Spectroradiometer on NASA’s Aqua satellite captured an image of Hurricane Carlos 6:57 a.m. EDT on July 15 using infrared imagery (because it was still night-time in the eastern Pacific). Infrared imagery reads heat, and picks up the clouds in the storm. 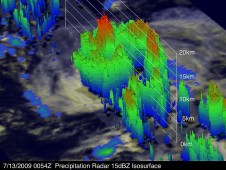 Carlos became a hurricane for about 24 hours over the previous weekend, then powered down to a tropical storm and now atmospheric conditions have enabled him to power back into a hurricane in the Eastern Pacific Ocean.

NASA's Tropical Rainfall Measuring Mission (TRMM) satellite has been capturing images of Carlos since it was born as tropical depression #4E last week. Scientists at NASA can use TRMM data to provide forecasters a 3-D look at the storm's cloud heights and rainfall, which is extremely helpful in forecasting.

"One of the interesting capabilities of the TRMM satellite is its ability to see through clouds with its Precipitation Radar (PR) and reveal the 3-D structure within storms such as Hurricane Carlos," said Hal Pierce, on the TRMM mission team in the Mesoscale Atmospheric Processes Branch at NASA's Goddard Space Flight Center, Greenbelt, Md.

On Tuesday, July 14, 2009 at 6 a.m. EDT (3 a.m. PDT), Carlos had regained hurricane status as a Category One storm on the Saffir-Simpson Scale with maximum sustained winds near 75 mph. Carlos was located near latitude 9.7 north and longitude 127.2 west. That's about 1,465 miles or southwest of the southern tip of Baja California. Carlos continues to move west near 9 mph and has a minimum central pressure of 987 millibars.

Carlos is predicted to move to within about 720 miles southeast of the Hawaiian Islands on Saturday, July 18, 2009. 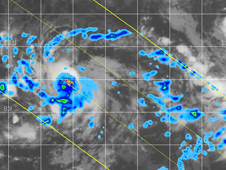 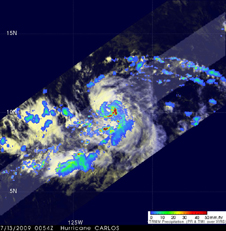 This is the image that TRMM captured of Carlos as dropped down from hurricane to tropical storm status on July 12 at 8:54 p.m. EDT. Credit: NASA/SSAI, Hal Pierce
› Larger image Tropical Depression 4E in the eastern Pacific became Hurricane Carlos over the weekend as expected. Carlos reached hurricane status on Saturday, July 11 at 5 p.m. EDT when it was about 1,000 miles south-southwest of the southern tip of Baja California. Twenty-four hours later at 5 p.m. EDT on Sunday, July 12, Carlos dropped back down to Tropical Storm status. Three satellites captured images of Carlos' transition, and two of the satellite images were combined for more in-depth view.

Images from two satellites were combined to get a closer look at Hurricane Carlos. NASA's Tropical Rainfall Measuring Mission (TRMM) satellite flew over the tropical storm on July 13 at 6:46 a.m. EDT (1046 UTC) and captured the horizontal pattern of rain intensity within Carlos. Sixteen minutes earlier, the Geostationary Operational Environmental Satellite (GOES-11) flew overhead and took an infrared image of Carlos' clouds. GOES-11 used infrared imagery to capture the heat of Carlos' clouds in order to create an image, because it was still night-time (3:46 a.m. PDT) and visible images wouldn't provide an image.

The combined image from GOES-11 and TRMM provide a comprehensive look at the Carlos' clouds and rainfall. In the image, Carlos' center is near the areas of heaviest rains. TRMM images are false-colored to show rainfall intensity. In this image, combined by the U.S. Naval Research Laboratory yellow, green and red areas indicate rainfall between 0.6 and 1.2 inches of rainfall per hour. Rainfall in Carlos' center was false-colored purple and white, indicative of heavy rainfall of almost 2 inches per hour.

TRMM is a joint mission between NASA and the Japanese space agency JAXA, and GOES is operated by the National Oceanic and Atmospheric Administration. GOES Project Science Office is located at NASA Goddard Space Flight Center, Greenbelt, Md. where images are processed.

On Monday, July 13 at 11 a.m. EDT, Carlos had moved 370 miles west of where it was born a hurricane and is now 1370 miles south-southwest of the southern tip of Baja California. That puts its center near 9.6 north latitude and 125.3 west longitude. Carlos had sustained winds near 50 mph, and isn't expected to change in intensity over the next two days. Carlos is moving just south of due west at 14 mph, and has a minimum central pressure near 997 millibars.

Like the GOES-11 satellite, NASA's Aqua satellite has infrared imagery onboard. The Atmospheric Infrared Sounder (AIRS) instrument aboard Aqua was used to measure temperatures of Carlos' cold clouds, instead of the extent of the cloud cover. Aqua snapped an image on July 12 at 5:12 p.m. EDT (21:12 UTC). The coldest cloud temperatures were false-colored to appear in purple indicating stronger storms and can be seen as a small round area, indicating Carlos' center. The second coolest cloud temperatures are in blue.

Yellow, green and red areas indicate rainfall between 20 and 40 millimeters (.78 to 1.57 inches) per hour. Red areas are considered moderate rainfall.

The AIRS data creates an accurate 3-D map of atmospheric temperature, water vapor and clouds, all of which are helpful to forecasters. 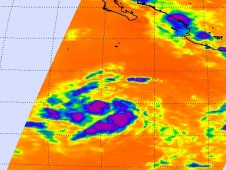 The eastern Pacific Ocean's fourth tropical depression formed in the early morning hours on Friday, July 10, but will likely strengthen into Tropical Storm Carlos over the weekend of July 11-12.

Forecasters at the National Hurricane Center said that the fourth tropical depression (TD#4E) of the eastern Pacific hurricane season is in a good environment that will promote strengthening: low wind shear and warm ocean waters in the open ocean. TD#4E is away from land and poses no threat to any landmasses as it continues on a westward track further away from land.

At 11 a.m. EDT on July 10, maximum sustained winds of TD#4E are near 35 mph with higher gusts. According to the National Hurricane Center, "Some strengthening is forecast and the depression will likely become Tropical Storm Carlos later today or on Saturday."

The center of TD#4E was located near latitude 10.4 north and longitude 112.8 west or about 885 miles south-southwest of the southern tip of Baja California. The depression is moving west near 12 mph further out to sea, and is expected to continue in that direction during the next two to three days.

Satellite imagery from NASA's Atmospheric Infrared Sounder (AIRS), an instrument that flies aboard NASA's Aqua satellite indicated cold high clouds and thunderstorms in TD#4E. AIRS captured an infrared image of the depression on July 10 at 4:53 a.m. EDT (0853 UTC) that showed a circular cloud pattern, indicating a storm that was becoming better organized.

In infrared imagery, NASA's false-colored purple clouds are as cold as or colder than 220 degrees Kelvin or minus 63 degrees Fahrenheit (F). The blue colored clouds are about 240 degrees Kelvin, or minus 27F. The colder the clouds are, the higher they are, and the more powerful the thunderstorms are that make up the cyclone.

Because the infrared imagery reads temperature it can also tell how warm the ocean waters are the surround a storm. Warmer temperatures are also false-colored and an orange color represents temperatures of 80F (300 degrees Kelvin).