Click on image to view animation.
Credit: NASA / TRMM Before satellites, meteorologists had no way to estimate or measure how much rain tropical cyclones generated where there were no buoys with rain gauges. The satellite managed by NASA and the Japanese Space Agency, JAXA provides that "rain gauge" from space in the Tropical Rainfall Measuring Mission (TRMM) satellite.

NASA's TRMM mission page has unveiled an animation of the rainfall created by Cyclone Bijli from the time it was born until the time it made landfall on Apr. 17, 2009 in Bangladesh.

TRMM data, along with information from other satellites, allows researchers to see how much rain is falling over most of the world every three hours and map areas of potential flooding. Maps that show areas of potential floods use precipitation radar data and high resolution measurements of water content of clouds made by microwave radiometers.

Those rainfall maps were made into a seven-day "movie loop" that allows users to track storms as they travel over land and oceans around the globe. The rainfall animations are developed in the Laboratory for Atmospheres of the NASA Goddard Space Flight Center, Greenbelt, Md. by the TRMM precipitation research team.

This animation shows Cyclone Bijli's rainfall from the time it was "born" on April 13 in the Bay of Bengal as "storm 94B," intensified into tropical depression and renamed "01B" and then grew into Tropical Storm Bijli where it made landfall in southern Bangladesh on April 17.

The TRMM Multi-Satellite Precipitation Analysis estimates that Bijli dropped as much as 129 millimeters (5.07 inches) of rainfall on Bangladesh, near 22.13 latitude and 90.63 longitude. That location is approximately 37.20km (23 miles) from coastal area of Patuakhali, a district in South-western Bangladesh.

The Hindu newspaper reported that Bijli hit the Chittagong Cox's Bazar coast hardest, bringing heavy rainfall and tropical storm-force wind gusts to 90 km/hour (55 mph) on Friday evening, April 17. The storm fizzled out the next day, but not before killing five people. Reports indicated that over 300,000 people evacuated before Bijli made landfall.

For more information about how TRMM looks at rainfall, visit > NASA's TRMM web site. TRMM is a joint mission between NASA and the Japanese space agency JAXA. 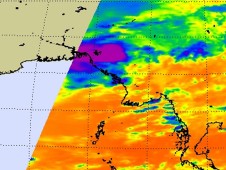 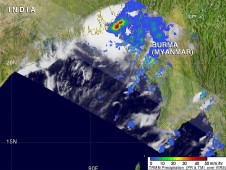 Credit: NASA/SSAI, Hal Pierce
> Larger image During the early morning hours of Saturday, April 18 (afternoon EDT on Apr. 17) NASA's Tropical Rainfall Measuring Mission (TRMM) satellite indicated that Tropical Cyclone Bijli was producing heavy rainfall over southeast Bangladesh as it moved ashore. These rainfall amounts of over 50 millimeters (almost 2 inches) per hour were the heaviest caused by Bijli in the countries that border the Bay of Bengal since Bijli formed.

Heavy rainfall from tropical cyclone Bijli is likely to produce flooding in Bangladesh and Burma (Myanmar). Most of the very heavy rainfall in the analysis above was in the area covered by the TRMM Microwave Imager (TMI) instrument. Rain rates in the center of the swath (lighter area) are from the TRMM Precipitation Radar (PR), the first precipitation radar in space, and those in the outer part of the swath are from the TRMM Microwave Imager (TMI). The rain rates were overlaid on infrared (IR) data from the TRMM Visible Infrared Scanner (VIRS).

Designed to measure rainfall from space, the Tropical Rainfall Measuring Mission satellite (better known as TRMM) has been in service for over 10 years now and continues to provide valuable images and information on tropical cyclones around the Tropics using a combination of passive microwave and active radar sensors. 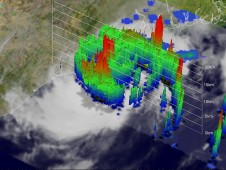 Image Credit: Hal Pierce, SSAI/NASA
> Larger image Tropical cyclones can extend hundreds of miles from one side to another, and the human eye can't possibly see an entire storm, but a NASA satellite can. NASA's Tropical Rainfall Measuring Mission (TRMM) not only sees the storm, but the rainfall inside of it, and scientists can visualize storms, including clouds and rainfall in 3-D.

That's what NASA scientists have done with Cyclone Bijli located in the Bay of Bengal. The 3-D TRMM Precipitation Radar instrument helped create a 3-D image of Bijli on April 16. It shows a well organized storm with intense thunderstorms reaching above 15 kilometers (9.3 miles) high in the western edge of a partially closed eyewall. Those high clouds known as "hot towers" are indicative of a strengthening storm. Bijli is expected to make landfall as a tropical storm over the weekend. 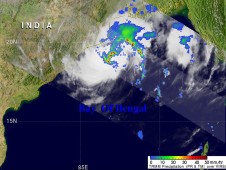 The TRMM satellite shows intense rainfall in Bijli's western side (in red).
Credit: NASA/SSAI, Hal Pierce
> Larger image TRMM acts like a "rain gauge in space" and can estimate rainfall in storms. On April 16, TRMM flew over Bijli and captured this image of rainfall happening throughout the storm. The TRMM rainfall analysis shows bands of intense rainfall in the western side of Tropical Cyclone Bijli. The storm's center is located near the yellow, green and red areas, which indicate rainfall between 20 and 40 millimeters (.78 to 1.57 inches) per hour. The red areas are considered moderate rainfall.

On Friday, April 17, Cyclone Bijli was raining on northeastern coastal India and Bangladesh, and headed toward a landfall in southern Bangladesh. At 0900 UTC (5 a.m. EDT) on April 17, Bijli's center was about 130 miles south-southwest of Kolkata, India. That's near 20.4 degrees north latitude and 89.0 degrees east longitude. The storm was moving east-northeast near 12 knots (13 mph), and packing sustained winds near 50 knots (57 mph).

Bijli is forecast to intensify slowly as it heads east. The Joint Typhoon Warning Center, the organization that forecasts cyclones in that area of the world, forecasts that Bijli will attain 60 knots (69 mph) just before landfall. That means it isn't expected to attain hurricane strength, and will likely make landfall as a strong tropical storm. Landfall is expected near or south of Chittagong, Bangladesh sometime on April 18. 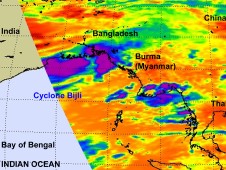 The infrared image shows Bijli's cold clouds in purple and blue. Those temperatures are as cold as or colder than 220 degrees Kelvin or minus 63 degrees Fahrenheit (F). The blue areas are around 240 degrees Kelvin, or minus 27F. The colder the clouds are, the higher they are, and the more powerful the thunderstorms are that make up the cyclone. In the area false colored as purple, that's where meteorologists would also find the "hot tower" clouds that the TRMM satellite sees.

At the time of this image, Cyclone Bijli's northeastern clouds and rains had already extended into Bangladesh.

Bangladesh and Burma (Myanmar) can expect their coasts to be battered with high waves and gusty winds to tropical storm strength from now through Bijli's landfall. Tropical storm-force winds extend out to 65 miles from the center. Bijli is expected to make landfall on April 12 in southern Bangladesh, south of the city of Chittagong. 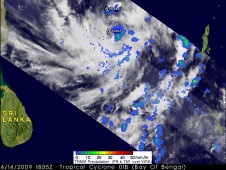 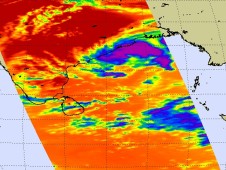 The AIRS instrument on the Aqua satellite captured Bijli's cold clouds (in blue and purple) near India's coast on Apr. 16 at 3:53 a.m. EDT. Credit: NASA/JPL
> Larger image Cyclone 1B has now strengthened into a tropical storm in the Bay of Bengal and has been renamed "Bijli." India's northeast coast is the first to be threatened by the Cyclone as it continues to strengthen and Bangladesh is already issuing alerts.

Bijli's sustained winds had strengthened to 45 knots (52 mph) as of April 16, at 09:00 UTC (5 a.m. EDT), and the storm was near 17.6 degrees north latitude and 86.2 degrees east longitude. That's about 330 nautical miles south-southwest of Kolkata, India. Bijli is moving north-northeast near 6 knots (7 mph). Bijli is creating 14 foot high waves in the Bay of Bengal, and tropical storm-force winds (35 mph) extend up to 55 miles from its center.

Bijli continues to strengthen slowly, and India's coast is now expected to experience the western fringes of the storm as it passes and heads toward Bangladesh.

The image above was created using rainfall data collected when the Tropical Rainfall Measuring Mission (TRMM) satellite flew over tropical cyclone Bijli (01B) on April 14, at 18:05 UTC (2:05 p.m. EDT). TRMM is a joint mission between NASA and the Japanese space agency JAXA that can estimate rainfall in a tropical cyclone from its vantage point in space. The storm was still called "01B" when data for this image was taken, as it was too weak to be classified as a tropical storm. This image shows 01B's rainfall in blue and yellow, which represents between 0 and 20 millimeters of rainfall per hour (.78 inch/hour). It was later upgraded to tropical storm.

According to Reuters news on April 16, ports in Bangladesh have been advised to post cautionary signals and fishing boats and trawlers have been warned not to go deep into the Bay of Bengal. The storm was still quite a distance from Bangladesh, some 710 miles (1.135 kilometers) southwest its main Cittagong Port, but they're preparing now. Residents of Bangladesh are familiar with tropical cyclones, as in 2007, Cyclone Sidr killed almost 3,500 people.

Bijli is forecast to intensify slowly as it continues to track over warm sea surface temperatures and under low vertical wind shear (strong wind shear can tear a storm apart) before it makes landfall near the Bangladesh/Burma (Myanmar) border.

Northern Indian Ocean Gets First Cyclone of the Season 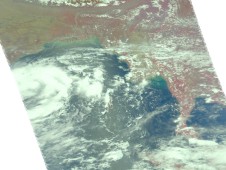 Credit: NASA JPL, Ed Olsen
> Larger image The Northern Indian Ocean now has its first cyclone of their season. Cyclone 1B formed late on Tuesday, Apr. 14, Eastern Time. It has now strengthened from a low pressure area into a tropical depression and is expected to bring rains and gusty winds to the northeast coastal areas of India before moving away.

Before Cyclone 1B strengthened into a tropical depression, the Joint Typhoon Warning Center (JTWC) labeled it System 94B. That was so the forecasters at JTWC could keep track of the storm. It just means that it’s the 94th low pressure area they've watched this season.

On Apr. 15 at 09:00 UTC (5 a.m. EDT), Cyclone 1B had maximum sustained winds near 35 knots (40 mph) as confirmed by NASA's QuikSCAT satellite. Any strengthening will be slow to occur, because of adverse atmospheric conditions (i.e. wind shear – winds blowing in different directions at different heights in the atmosphere). It was moving northwest near 9 knots (10mph) towards the Indian coast. It is expected to brush the coast and then be pushed further east into the Bay of Bengal because of a developing high pressure system over India.

Cyclone 1B was about 380 miles east-northeast of Chennai, India near 14.7 degrees north latitude and 86.6 degrees east longitude. That puts the center of the storm about west of center between India and Burma (or Myanmar) in the Bay of Bengal.

According to the JTWC, the threatened landmasses include the Andaman Islands, India, Bangladesh, and Burma (Myanmar). There are already warnings posted for the Indian coast, and the Andaman Islands can expect gale force winds before 09:00 UTC on Apr. 16. The coasts of Orissa and Andra Pradesh may experience gales within the next day after. 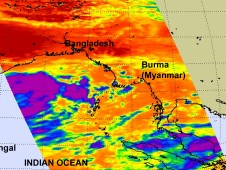 The AIRS infrared image was created on Apr. 15 at 7:11 UTC (3:11 a.m. EDT) and shows the eastern half of the Cyclone, because its orbit wasn't centered over the storm.