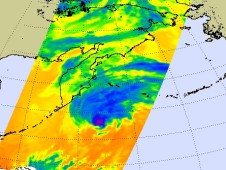 The remnants from Typhoon Vamco are sweeping over Alaska's Aleutian Island chain today and tomorrow, and high wind warnings have been posted by the National Weather Service.

NASA's Aqua satellite flew over Extra-tropical Storm Vamco and the Atmospheric Infrared Sounder (AIRS) instrument onboard captured an infrared image on August 25 at 11:29 a.m. EDT. The AIRS image showed Vamco as a small rounded area of showers and thunderstorms east of Alaska's Aleutian Island chain at that time. AIRS' infrared imagery indicated there were still some strong thunderstorms with very high, cold cloud tops in the center of the storm.

The extratropical remnants of Typhoon Vamco continue moving northeast out of the West Pacific Ocean, thanks to the Jet Stream (a fast moving ribbon of air between the troposphere and stratosphere that guide storms). As a result, Vamco's remnants are moving into the Bering Sea today, August 26, and will move southeastward toward the northwestern Gulf of Alaska tomorrow, August 27. During its travels, it's creating a lot of strong winds over the Aleutian Islands as it moves from west to east.

The western and central Aleutian Islands both have high wind warnings from the National Weather Service. Those warnings call for winds gusting between 40 and 60 mph, tropical storm-force. Some gusts may even reach 75 mph, hurricane-strength. The Western Aleutian warning is up until 4 p.m. local time today. The Central Aleutian warning is in force until noon local time on Thursday, August 27. These gusty winds will be accompanied by scattered showers both today and tomorrow, and winds should diminish in both areas by Thursday night.

Meanwhile, the Eastern Aleutian Islands should expect winds gusting between 30-50 mph from this afternoon (local time) until Thursday night. The gusty winds will also be accompanied by scattered showers, as Vamco's remnants continue to move past. 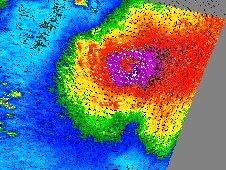 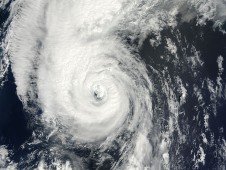 Vamco was in the process of becoming an extra-tropical storm on August 25, but his sustained winds were still around 74 mph, making him a category one typhoon. NASA's QuikScat satellite confirmed his powerful winds and NASA's Terra satellite visible imagery still revealed a strong storm.

At 2 a.m. EDT on August 25, Vamco was still enroute to the Alaskan islands headed north-northeast at 38 mph in the north Central Pacific Ocean. He was about 980 miles west-southwest of Kiska, Alaska. That's near 41.6 north and 158.9 east. Vamco will continue moving northeast toward the far southwestern Aleutian Islands.

NASA's QuikScat satellite was able to peer through Vamco's clouds on August 24 using microwave technology and actually measure the winds on the surface of the ocean beneath him. QuikScat found Vamco still had sustained winds near 65 knots (74 mph), so he was still at a category one hurricane strength at that time.

Vamco is starting to weaken, however. Infrared satellite imagery, such as that from NASA's Aqua satellite's Atmospheric Infrared Sounder (AIRS) instrument, indicated that Vamco's eye has become elongated and grown larger. Also, Vamco's convection and rainfall has started to erode as wind shear has increased. Vamco is expected to continue weakening as winds continue to batter his circulation.

Although the U.S. Navy's Joint Typhoon Warning Center has issued their final advisory on Vamco, shipping interests in the North Pacific Ocean should be aware of high seas. 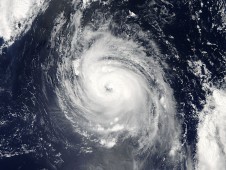 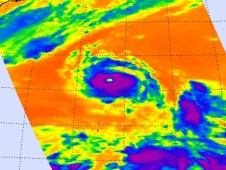 Typhoon Vamco is being as stubborn in its quest to live in the Pacific Ocean as Bill is in the Atlantic Ocean this week, and NASA satellite data confirmed that the large storm has a huge eye, about 45 miles in diameter!

On August 24, Vamco was 990 miles northwest of Wake Island, near 32.1 north and 155.0 east. It was moving north near 12 mph and had sustained winds near 85 knots (97 mph) creating 25 foot-high waves in the open ocean. Typhoon Vamco is maintaining strength and will start to weaken later as upper-level winds start to batter the storm.

Vamco is currently in the Northern West Pacific Ocean and will begin changing to an extra-tropical storm tomorrow while moving into the North Central Pacific Ocean. The extreme west Aleutian Islands will see Vamco as a non-tropical low by Wednesday.

The Aleutian Islands are a chain of 300 small volcanic islands in the Northern Pacific Ocean that extend about 1,200 miles west from the Alaska Peninsula toward the Kamchatka Peninsula. They are the westernmost part of the United States. 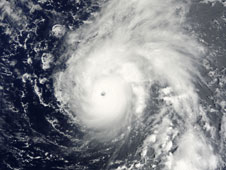 Typhoon Vamco is forecast to cross into the Central Pacific Ocean early next week and may change its name to a hurricane. The Joint Typhoon Warning Center is forecasting Vamco to near the Semichi Islands of Alaska. The Semichi Islands are a cluster of small islands in the Near Islands group of the Aleutian Islands, Alaska, and don't usually see tropical (or extra-tropical) systems.

The MODIS instrument's image showed that Typhoon Vamco is a well-formed storm. It has a small, distinctive eye defined by a wall of clouds. In the image there were bands of clouds that spiral out from the eye that form a tight, symmetric circle, another sign of a powerful storm.

Forecasters expected the typhoon to continue to strengthen into a Category 4 Super Typhoon by August 21. The storm was not expected to hit land. 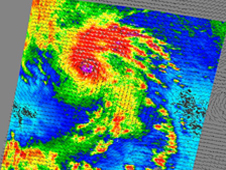 > Larger image
QuikScat sees surface winds in typhoons, and Vamco's are seen in this satellite image from August 19. Different colors and wind direction are indicated by small barbs. White barbs point to areas of heavy rain. The highest wind speeds are normally shown in purple, which indicate winds over 40 knots (46 mph). The strongest winds are represented in the center of circulation.
Credit: NASA JPL 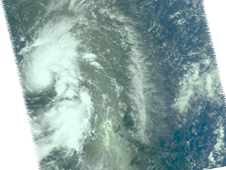 > Larger image
AIRS IMAGE: This visible image from NASA's Aqua satellite on August 18 at 10:29 p.m. EDT shows that Vamco has the signature "comma shape" of a tropical cyclone.
Credit: NASA JPL, Ed Olsen Vamco Expected to Power Up to a Category 4 Typhoon at Sea

Typhoon Vamco is about 1,000 miles east-southeast of the Japanese Island of Iwo To in the western Pacific Ocean, and the good news is that as the storm intensifies over the next couple of days, it will keep away from land.

NASA's Aqua satellite and NASA's QuikScat satellite both took a look at Vamco and noticed its clouds have the signature "comma shape" of a typhoon, and that it's winds within were powerful.

Typhoons are the same as hurricanes, but known as "typhoons" west of the International Dateline. Vamco is now category 2 typhoon on the Saffir-Simpson Scale and is forecast to be a category 4 typhoon by Thursday evening, Eastern Time.

NASA's Quick Scatterometer satellite (QuikScat) measured Vamco's winds from space by using microwaves to peer into the clouds. QuikScat can determine the speed of the rotating winds. On August 19 at 3:29 a.m. EDT QuikScat showed Vamco's wind speeds were of Category Two Typhoon strength.

The Atmospheric Infrared Sounder (AIRS) instrument on NASA's Aqua satellite captured a visible image of Vamco on August 18 at 10:29 p.m. EDT that revealed Vamco has the signature "comma shape" of a tropical cyclone.

Fortunately no land masses are threatened however, shipping interests in the northern Pacific should this keep apprised of this storm. The storm is headed in a northerly direction. 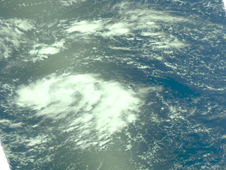 The eleventh depression of the western Pacific hurricane season formed yesterday, August 17, and is now Tropical Storm Vamco. Vamco is staying in the open waters, and is expected to continue strengthening.

On August 18 at 11 a.m. EDT, Tropical Storm Vamco had sustained winds near 50 knots (57 mph). It was centered about 1,000 nautical miles east-southeast of the Japanese island of Iwo To, formerly known as Iwo Jima, located near 17.0 north latitude and 157.3 east longitude. Vamco was moving northward in open waters at 6 mph and kicking up waves 17 feet high.

The U.S. Navy's Joint Typhoon Warning Center, the organization that forecasts for tropical cyclones in the Western Pacific, noted "the system will continue to gradually intensify to typhoon status by [Thursday, August 20] as it tracks over warm water and under low vertical wind shear."