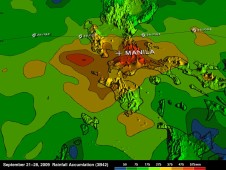 The Tropical Rainfall Measuring Mission or TRMM satellite, orbits the Earth and measures the amount of rainfall created by a tropical cyclone. When Typhoon Ketsana (known in the Phillippines as "Ondoy") made landfall early this past weekend TRMM was monitoring its rainfall. That data was used to create a 3-D map of rainfall over the Philippines from September 21-28.

The TRMM-based, near-real time Multi-satellite Precipitation Analysis (TMPA) at the NASA Goddard Space Flight Center, Greenbelt, Md. is used to monitor rainfall over the global Tropics. TMPA rainfall totals for the 7-day period 21 to 28 September 2009 for the northern Philippines and the surrounding region showed that the highest rainfall totals occurred south of the storm's track in an east-west band over central Luzon that includes Manila. Amounts in this region are on the order of 375 mm (~15 inches) to over 475 mm (~19 inches). The highest recorded amount from the TMPA near Manila was 585.5 mm (almost 24 inches).

Ketsana maintained minimal tropical storm intensity as it crossed central Luzon on the afternoon of September 26 (local time). The main deluge in the Manila area, located on the western side of Luzon, began around 8:00 a.m. local time even though the center of Ketsana had yet to make landfall on the eastern side of the island.

A record 13.43 inches of rain fell in Manila in the six hours between 8 a.m. and 2 p.m. local time, which is equivalent to about a month's worth of rain for the area. The enhanced rainfall over on the Manila-side of the island as the storm approached was because of an interaction between Ketsana's circulation and the seasonal southwest monsoon.

On-the-ground photos from Boston.com of the devastation Ketsana's rains caused can been seen at: http://www.boston.com/bigpicture/2009/09/typhoon_ketsana_ondoy.html 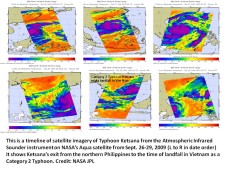 NASA's Aqua satellite flew over Typhoon Ketsana during its lifetime and captured infrared imagery on a daily basis. The images showed high, cold, thunderstorm cloud tops (purple) as cold as -63F, as they dumped heavy rains over the northern Philippines and Vietnam.

Although Ketsana was a tropical depression when it made landfall in the northern Philippines, it brought record rainfall, creating deadly flooding and mudslides. Flooding killed 246 people in the Philippines, and affected more than 2 million homes there.

Ketsana made landfall in the Vietnamese province of Quang Nam at around 2 p.m. local time. When it made landfall, it was a Category 2 typhoon with maximum sustained winds of up to 144 kilometers per hour (90 mph).

In Vietnam's central highland province of Kon Tum, Ketsana destroyed or damaged approximately 170,000 homes, and crops and irrigation systems. More than 350,000 people were evacuated before the typhoon made landfall. Ketsana was downgraded to a tropical depression after crossing into Laos early Wednesday.

Even in Cambodia, Ketsana killed 9 people and destroyed almost 100 homes in Kampong Thom province, which is located 80 miles north of the capital Phnom Penh.

NASA's Aqua satellite flew over Typhoon Ketsana during its lifetime and its Atmospheric Infrared Sounder (AIRS) instrument captured infrared imagery from September 26-30. The images showed high, cold, thunderstorm cloud tops as cold as -63F as they dumped heavy rains over the northern Philippines and Vietnam. That data helped forecasters see that Ketsana had powerful rain-making thunderstorms. AIRS provided valuable infrared data on Ketsana's cloud top temperatures, which are important because they tell forecasters how high thunderstorms are, and the higher the thunderstorm, the more powerful. 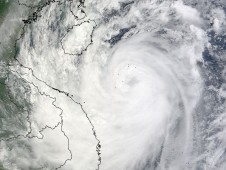 Typhoon Ketsana killed more than 200 people in the Philippines and when it made landfall early today, September 29, it killed 23 in Vietnam.

Vietnamese officials reported deaths in six provinces, including three in Quang Nam, where the storm made landfall around 2 p.m. local time. It had maximum sustained winds of up to 144 kilometers per hour (90 mph) at the time of landfall.

By 10 p.m. local time on September 29, the center of Ketsana had moved inland and was located 70 miles south of Hue, Vietnam, near the border of Vietnam and Cambodia. The storm was weakening quickly. It was still moving westward near 13 mph and is expected to dissipate sometime late on Wednesday, September 30.

The latest tropical system to the hit the Philippines, Tropical Storm Ketsana (known locally as "Tropical Storm Ondoy"), has resulted in record flooding in the capital of Manila on the island of Luzon in the northern Philippines.

So far 140 people have died in the resultant flooding and mudslides with at least 32 more still missing. Ketsana began as a tropical depression in the west- central Philippine Sea on the morning of September 25, 2009 about 500 miles (~800 km) east-southeast of the central Luzon coast. The system was upgraded to a minimal tropical storm on the evening of the 25th (morning of the 26th local time) as it tracked westward towards Luzon. Ketsana maintained minimal tropical storm intensity as it crossed central Luzon on the afternoon of the 26th (local time).

The main deluge in the Manila area, located on the western side of Luzon, began around 8:00 a.m. local time (00 UTC September 26) even though the center of Ketsana had yet to make landfall on the eastern side of the island. A record 13.43 inches of rain fell in Manila in the 6 hours between 8:00 a.m. and 2:00 p.m. local time, which is equivalent to about a month's worth of rain for the area.

The reason for the enhanced rainfall over on the Manila-side of the island as the storm approached was the interaction between Ketsana's low-level circulation and the seasonal southwest monsoon. The southwest monsoon comes about from the summertime heating of the Asian landmass. As warm air rises over the continent it induces low pressure as the surface, which draws air in from surrounding regions. The southwest monsoon typically runs from June to September in the Philippines and draws warm, humid air up from the southwest across the South China Sea and into the islands where it can interact with the topography. Ketsana's counterclockwise circulation enhanced the effect, which resulted in the torrential rains.

Armed with both a passive microwave sensor and a space-borne precipitation radar, the primary objective of the Tropical Rainfall Measuring Mission satellite (better known as TRMM) is to measure rainfall from space.

For increased coverage, TRMM can be used to calibrate rainfall estimates from other additional satellites. The TRMM-based, near-real time Multi-satellite Precipitation Analysis (TMPA) at the NASA Goddard Space Flight Center is used to monitor rainfall over the global Tropics. 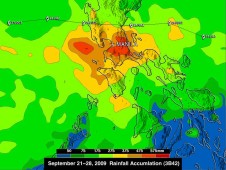 > View larger image
Credit: SSAI/NASA, Hal Pierce TMPA rainfall totals are shown here for the 7-day period from September 21 to 28, 2009 for the northern Philippines and the surrounding region. The highest rainfall totals occur in an east-west band over central Luzon, including Manila, south of storm's track (indicated by the solid black line). Amounts in this region are on the order of 375 mm (~15 inches, shown in dark yellow) to over 475 mm (~19 inches, shown in orange). The highest recorded amount near Manila was 585.5 mm (almost 24 inches). After passing through the Philippines, Ketsana intensified into a minimal typhoon over the central South China Sea and is expected to make landfall along the central coast of Vietnam.

To see an animation of the calculated flood potential for this event, click here: http://trmm.gsfc.nasa.gov/trmm_rain/Events/manila_flood_potential_21-28sep09.mpg.

Heavy rain amounts (from satellites) and flood potential calculations (from a hydrological model) are updated every three hours globally with the results shown on the "Global Flood and Landslide Monitoring" TRMM web site pages located at: http://trmm.gsfc.nasa.gov/publications_dir/potential_flood_hydro.html. 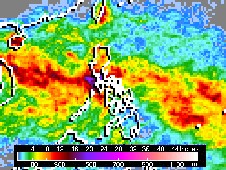 > View larger image
This rainfall map was created by NASA's TRMM satellite and shows a week of global rainfall accumulation from September 21-28, 2009. The purple area in the northern Philippines shows rainfall between 24-32 inches in purple.
Credit: NASA/TRMM 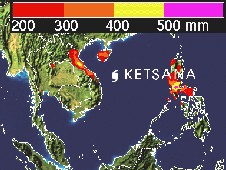 > View larger image
TRMM rainfall indicated that between 200-600 millimeters (mm) of rain (7.8-23.6 inches) of rain have fallen in the northern Philippines. The yellow-green area on the rainfall map is around 100 mm, red is between 300-400 mm, while the purple indicates 500 to 600 mm of rainfall.
Credit: NASA/TRMM 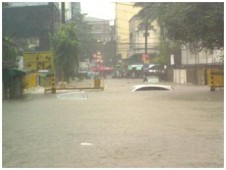 The tropical depression (17W) that formed on Friday, September 25 brought deadly flooding rains and mudslides through the northern Philippines over the weekend, killing at least 140 people and flooding many cities.

Tropical Depression 17 W, now named Ketsana, and also named Ondoy in the Philippines, dumped record-breaking rainfall there over the weekend. PAGASA, the Philippine Atmospheric, Geophysical and Astronomical Services Administration noted the total rainfall on Saturday from 8 a.m. to 2 p.m. surpassed the highest 24-hour rainfall that the weather bureau recorded back in June 1967 for Manila. The rainfall generated from Ondoy (Ketsana) during its first six hours over land measured 13.43 inches (341 millimeters). The old record from 42 years ago was 334 millimeters in 24 hours.

NASA's Tropical Rainfall Measuring Mission (TRMM) satellite data confirmed the rainfall from its orbit in space. TRMM showed rainfall between 200-600 millimeters (mm) (7.8-23.6 inches) in the northern Philippines over the weekend from September 25-28. The product was developed in the Laboratory for Atmospheres of the NASA Goddard Space Flight Center, Greenbelt, Md. by the TRMM precipitation research team.

More than 116,000 are being sheltered, and the flooding affected more than 400,000 people in Manila and surrounding areas. People either fled or sought refuge on the roofs of buildings or their homes. Reports indicated that as much 25 percent of Manila was flooded, and clean water, food, cooking gas and medicines are difficult to find. Cars and trucks that were swept away by floodwaters were left in piles with mud and other debris. Some hospitals have also been reported damage from flooding.

Rescue operations and updates were posted on a blog from the Philippines, the Manuel L. Quezon III blog: http://www.quezon.ph/2009/09/26/how-to-help/. According to the blog, "On Sunday, 27 September, we distributed over 2100 relief packages to three communities within Metro Manila and today, 28 September, are in the process of loading our trucks with over 3000 packs to be distributed to prioritized communities." Authorities estimated that on September 27, 25% of Manila remained submerged.

A video posted by C.Magno on YouTube on September 27 at 10:30 a.m. local time showed several feet of floodwaters with floating cars and trucks around the hospital at Bagyong: http://www.youtube.com/watch?v=LPbPCLOxAlI.

Typhoon Ketsana is now forecast to make landfall in Hue, Vietnam tomorrow September 29. Hue is the capital city of Thua Thien - Hue province, Vietnam with a population of 340,000. It was the imperial capital of the Nguyen Dynasty between 1802 and 1945, and is well known for its monuments and architecture. 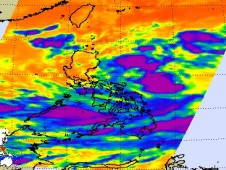 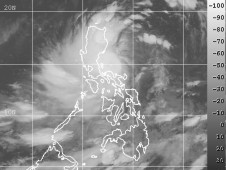 > View larger image
The MTSAT satellite captured an infrared image of TD17W at 17:30 UTC today, and showed the center of circulation just to the east of the northern Philippines. MTSAT is a dual mission satellite for Australia and Japan.
Credit: US Navy/Joint Typhoon Warning Center Tropical Depression 17W Making Landfall in the Philippines

Tropical depression 17W formed in the Philippine Sea very early today, September 25, and its forecast track takes it across the northern Philippines this weekend. The Philippine government has designated the storm as Tropical Depression "Ondoy."

After it trudges through the Philippines this weekend, it is then forecast to intensify prior to final landfall in Vietnam early next week.

At 15:00 UTC (1 p.m. EDT) on September 25, the center of 17W was located approximately 330 nautical miles east of Manila, Philippines, near 14.6 north and 126.1 east. It had maximum sustained winds near 35 mph, and was moving west-northwest near 10 mph. It was generating waves as high as 12 feet, so the east facing shores of the northern Philippines can expect heavy surf and beach erosion, accompanied by gusty winds and downpours.

Satellite imagery has shown that the low level center of the storm is located more than 100 nautical miles to the east of the strongest convection (and precipitation) that is already affecting the northern Philippines. Satellite imagery also revealed that convection has deepened or strengthened since midnight this morning (September 25).

After that, 17W will continue to track westward towards Vietnam and strengthen in the warm waters in the Gulf of Tonkin.