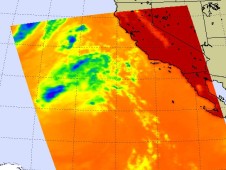 > View larger image
This infrared satellite image shows a faded Ignacio (blue patches are his cool remnant clouds) in the Eastern Pacific Ocean, and a view of a forest fire plume on the California/Nevada border.
Credit: NASA/JPL, Ed Olsen NASA Imagery Catches Faded Ignacio and Smoke From a California Fire

Infrared imagery measures temperatures and not only can it see cold, high cloud tops in tropical cyclones, but warm ocean waters, or smoke and hot fires burning. AIRS captured an infrared image of Ignacio's remnants and the fire in California on August 27 at 5:29 a.m. EDT).

Infrared imagery shows the temperature of the cloud tops which gives a hint about the power of the thunderstorms in a tropical cyclone. The colder the clouds are, the higher they are, and the more powerful the thunderstorms are that make up the cyclone.

At 11 a.m. EDT on August 27, the National Hurricane Center declared Ignacio a remnant low pressure area. They noted "Ignacio has been devoid of organized deep convection for about 12-18 hours." It's taking awhile for Ignacio to fizzle because he was a large storm, but will be a memory by the weekend. 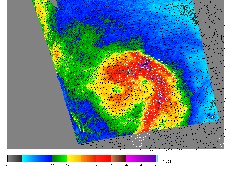 > View larger image
NASA's QuikScat satellite captured Tropical Depression Ignacio's winds using its microwave imagery to peer through its clouds on August 26 at 9:52 a.m. EDT. The strongest winds are represented in the center of circulation in the red area, which are about 34 mph. White barbs point to the few areas of heavy rain.
Credit: NASA/JPL, Peter Falcon NASA's QuikScat Satellite Watching Ignacio Weaken to Low

NASA's QuikScat satellite has watched Ignacio's winds slow from tropical storm to tropical depression-force this morning, August 27. By the end of the day he's expected to be just a remnant low pressure area in the Eastern Pacific.

NASA's QuikScat satellite captures Ignacio's winds every day using its microwave imagery to peer through its clouds. QuikScat can determine the speed of the rotating winds. QuikScat images show wind speeds in different colors and wind direction are indicated by small barbs. In QuikScat imagery, the highest wind speeds are normally shown in purple, which indicate winds over 40 knots (46 mph), but QuikScat today revealed that Ignacio's highest winds in the center were near 34 mph and were false-colored in red. Ignacio had some areas of heavy rain, but like his winds, they were also diminishing.

Ignacio's sustained winds were near 34 mph, and fading because of the cooler waters he's moved into. His center is located near 24.6 north and 126.6 west, about 1,060 miles west of Cabo San Lucas, Mexico. He was still moving northwesterly at 13 mph. Even though he's expected to become a low pressure area later today, he's not expected to totally dissipate until Sunday, August 30. 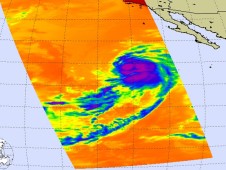 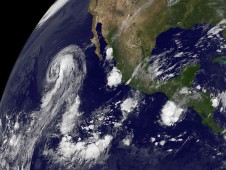 > View larger image
Ignacio (top left) may get some tropical cyclone company. The GOES-11 satellite revealed two areas of showers and thunderstorms that are trying to get organized on August 26. One is south-southwest of the Mexican coast (round area of clouds center of image), while the other is south of Guatemala (round area of clouds bottom right).
Credit: NASA/GOES Project Ignacio May Get Some Company in the Eastern Pacific

Tropical Storm Ignacio may not be alone in the Eastern Pacific Ocean for long. There are two areas of showers and thunderstorms that forecasters are watching for development, farther east and closer to land.

NASA's infrared satellite imagery indicates that Tropical Storm Ignacio still had some punch left in him, but that won't be the case in the next day or two.

On August 26 at 5 a.m. EDT, Tropical Storm Ignacio had sustained winds near 50 mph, but he's moving into an area of adverse conditions that are expected to weaken him in the next day. Ignacio was located 815 miles west of the southern tip of Baja California, near 21.2 north and 122.5 west. He was moving northwest near 14 mph, and his minimum central pressure was 1000 millibars.

The Atmospheric Infrared Sounder (AIRS), instrument that flies aboard NASA's Aqua satellite, captured an image of Tropical Storm Ignacio yesterday that showed Ignacio still had some stronger thunderstorms around his center. That's about to change as he's entering cooler waters.

Infrared imagery is false-colored and higher cloud tops of stronger storms are depicted in purple. Ignacio showed a circular area of high, strong thunderstorms around his center of circulation on August 25 at 5:35 p.m. Those highest thunderstorms are as cold as or colder than 220 Kelvin or minus 63 degrees Fahrenheit (F).

Meanwhile, the other two areas in the Eastern Pacific that are holding the interest of forecasters are closer to land and both areas were captured by NOAA's GOES-11 (Geostationary Operational Environmental) satellite earlier today, August 26.

The GOES-11 satellite imagery revealed that both of these clusters of showers and thunderstorms are still pretty disorganized. NASA's GOES Project at the NASA Goddard Space Flight Center in Greenbelt, Md. created the imagery using data from the satellite.

Right now, as Ignacio is forecast to fade, perhaps one or two of those other areas may take his place. 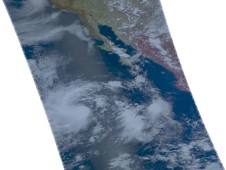 The twelfth tropical depression of the Eastern Pacific Ocean was born during the afternoon of August 24 and grew quickly into Tropical Storm Ignacio. NASA's Aqua satellite flew over Ignacio later when he was about 650 miles west-southwest Cabo San Lucas, Mexico.

By August 25, Ignacio had sustained winds near 50 mph and is expected to strengthen a little. At 11 a.m. EDT, he had moved 25 miles west from where Aqua caught him, and was near 18.6 north and 119.3 west. He was moving west-northwest near 12 mph, and had a minimum central pressure near 1000 millibars.

Ignacio will continues on a west northwesterly track, but will eventually enter cooler waters, which will sap his strength. He's expected to weaken to a low pressure area by the weekend.