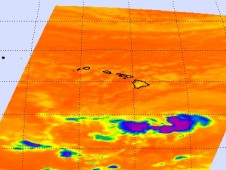 Tropical Depression Hilda is already dissipating while moving west. NASA's infrared satellite imagery confirmed that she doesn’t have a good circulation. In fact, her clouds are elongated and becoming more disorganized as she continues fading far south of Hawaii.

The last advisory on Hilda, issued on August 27 at 5 p.m. Hawaiian Time reported that Hilda had maximum sustained winds near 30 mph, but they've weakened since. The center of Hilda was located 435 miles south of Hilo, Hawaii, near 13.5 north, and 156.1 west. Hilda was still moving west near 14 mph, and won't have any impact on the Hawaiian Islands. Estimated minimum central pressure is 1010 millibars.

Hilda is expected to dissipate over the weekend. 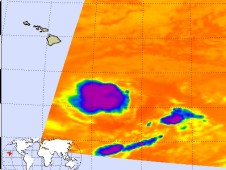 > View larger image
The Atmospheric Infrared Sounder (AIRS) instrument on the Aqua satellite saw Hilda's cold clouds on August 26 at 7:29 a.m.EDT and didn't see an eye or the hallmark "comma shape" of the storm, just a rounded area of thunderstorms that indicated she was losing her punch.
Credit: NASA/JPL, Ed Olsen 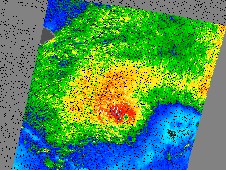 > View larger image
NASA's QuikScat satellite captured Tropical Depression Hilda's winds using its microwave imagery to peer through its clouds on August 26 at 12:26 a.m. EDT. The strongest winds are represented in the center of circulation in the red area, which are about 34 mph. White barbs point to the few areas of heavy rain near Hilda's center.
Credit: NASA/JPL, Peter Falcon NASA's Satellite Imagery Sees Hilda Hit a Wall

Two days ago, Hilda was in prime shape to strengthen further as she tracked westward, far south of the Hawaiian Islands. Today, as a result of winds and cooler waters, she's weakened to a tropical depression, and NASA satellites helped confirm that looking at her waning winds and thunderstorms.

The Atmospheric Infrared Sounder (AIRS) instrument on the Aqua satellite observes Hilda's cold clouds, which is an indication of strength. The colder the thunderstorms, the higher and more powerful they are, but Hilda didn't show any. AIRS imagery also didn't see an eye or the hallmark "comma shape" of the storm, just a rounded area of thunderstorms that indicated she was losing her punch.

Like the Aqua satellite, every day, NASA's QuikScat satellite captures data from tropical cyclones. QuikScat reads the rotating surface wind speeds of tropical cyclones using its microwave imagery to peer through their clouds. QuikScat data are used to make images that show wind speeds in different colors and wind direction are indicated by small barbs. The highest wind speeds are normally shown in purple, which indicate winds over 40 knots (46 mph), but QuikScat today revealed that Hilda's highest winds in the center were only near 34 mph.

Hilda's sustained winds were near 34 mph, and fading because of the cooler waters she's moved into. Her center is located near 13.7 north and 152.5 west She was moving west-southwest near 9 mph, and will continue tracking south of the Hawaiian Islands.

She's not expected to totally dissipate until Monday, August 31. 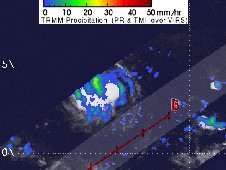 Tropical Storm Hilda is hanging on to tropical storm force winds, and continues to track south of the Hawaiian Islands. NASA's Tropical Rainfall Measuring Mission satellite noticed some moderate rainfall in Hilda's center earlier today, but the storm is staying far enough south of Hawaii to not cause trouble for travelers and vacationers.

Satellite imagery indicates she's a small storm, so forecasters have noted that any impacts to the Hawaiian Islands, which lay far to the north of her forecast track, are expected to be minimal. Hilda's tropical storm force winds extend out to 70 mph, quite a difference from this week's Atlantic Hurricane Bill's tropical storm-force winds, which extended almost 230 miles from his center!

Hilda's maximum sustained winds were near 45 mph, and slow strengthening is possible as she continues west-southwest near 9 mph. She is expected to turn to the west tomorrow, August 27. Estimated minimum central pressure is 1007 millibars. She was creating 12-foot high seas. As for the Hawaiian Islands, the National Weather Service in Honolulu, HI notes "Surf along south facing shores will be 1 to 3 feet with occasional larger sets to 4 feet possible Wednesday."

As the TRMM satellite flew over Hilda, it captured data that was used in making a rainfall analysis at NASA's Goddard Space Flight Center in Greenbelt Md. The rainfall analysis showed that Hilda had some moderate rainfall near her center, falling at about one inch (25 millimeters) per hour. TRMM is a joint mission between NASA and the Japanese space agency, JAXA.

Over the next five days, Hilda's maximum sustained winds are not expected to exceed 50 knots (57 mph) as she passes to the south of the Hawaiian Islands. 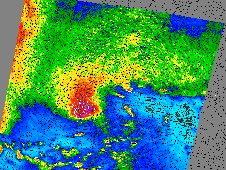 Residents of the Hawaiian Islands continue to have tropical cyclones to watch this season, and Hilda is forecast to stay to their south while intensifying over the next couple of days. NASA's QuikScat satellite is watching closely as her winds are expected to slowly strengthen while moving into a better environment. She's forecast to reach hurricane status by Thursday. At 5 a.m. EDT local Hawaii Time on August 25, Hilda continued to move west near 9 mph, and had sustained winds near 60 mph. She's expected to turn west-northwest in the next two days. Hilda's center was about 535 miles southeast of Hilo, Hawaii, and 745 miles southeast of Honolulu. That's near 14.7 north and 148.9 west. Estimated minimum central pressure is 1001 millibars. NASA's Quick Scatterometer satellite (QuikScat) passed over Hilda near midnight EDT on August 23 and confirmed tropical storm force winds. QuikScat uses microwaves to peer into a storm's clouds and determine the speed of the rotating winds at the surface. Even at that time, Hilda's sustained winds were near 60 mph, but that's about to change as she moves into warm waters, and an area with lighter wind shear. 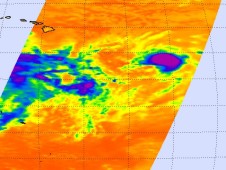 Tropical Storm Hilda formed over the weekend and is continuing to strengthen, as is evident in infrared satellite imagery from NASA's Aqua satellite.

On Monday, August 24, Hilda's maximum sustained winds were near 65 mph and she's expected to intensify into a hurricane over the next day as she starts tracking south of Hawaii. At 5 a.m. Hawaii Local Time Hilda's center was 740 miles east-southeast of Hilo, Hawaii and about 950 miles east-southeast of Honolulu. That's near 14.4 north and 145.4 west. She is moving west near 13 mph, and will continue to do so over the next several days. Minimum central pressure is estimated near 999 millibars.

In infrared imagery, NASA's false-colored purple clouds are as cold as or colder than 220 Kelvin or minus 63 degrees Fahrenheit (F). The blue colored clouds are about 240 Kelvin, or minus 27F. Today's satellite imagery indicated cloud top temperatures colder than minus 63F.

Hilda is expected to continue on a westward track over the next couple of days and stay south of Hawaii through the week, kicking up surf on the south facing beaches there.