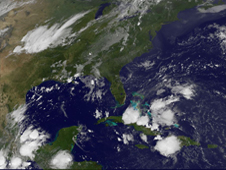 > High resolution image
The latest NOAA's GOES-12 satellite imagery from August 18 at 7:31 a.m. EDT doesn't show any circulation from what was once Claudette over Mississippi or Alabama. In fact, it appears that what's left of her clouds stretch from Mississippi up the Appalachian Mountain range. Credit: NASA GOES Project Satellite imagery from the National Oceanic and Atmospheric Administration's Geostationary Operational Environmental Satellite, GOES-12 shows clearly that both former Tropical Storms Claudette and Ana are now disorganized and are moving on.

Ana's life has been a struggle since its beginnings as tropical depression Two. Late on August 17, it really started to fall apart. Today, August 18, the remnants of Ana are in the form of disorganized showers and thunderstorms that stretch from Haiti, across eastern Cuba to southeastern and central Bahamas. That cluster of storms is moving west between 20-25 mph. The showers and thunderstorms associated with Ana's remnant will cover all of Cuba, move into south Florida and the Bahamas. There's still a chance it could all come together again and be reborn as Ana, but it's less than 30 percent right now.

Claudette made a much more memorable impression, particularly over the Florida Panhandle, southern Alabama and Mississippi. NOAA's National Hydrometeorological Prediction Center noted that the precipitation associated with Claudette's remnants have diminished now that it's over the southeastern U.S. They note "showers and thunderstorms may develop and produce isolated heavier amounts across the southeastern U.S. [today, August 18]." Surface observations and satellite imagery don't even detect any surface circulation, so Claudette has truly dissipated.

The latest NOAA's GOES-12 satellite imagery doesn't show any circulation from what was once Claudette over Mississippi or Alabama. In fact, it appears that what's left of her clouds stretch from Mississippi up the Appalachian Mountain range. The image, taken on August 18 at 7:31 a.m. EDT (1131 UTC) was created by the NASA GOES Project at NASA Goddard Space Flight Center in Greenbelt, Md.

Claudette didn't go without leaving a very wet mark, however. From the National Hydrometeorological Prediction Center, here are some rainfall totals through 10 p.m. EDT, August 17: 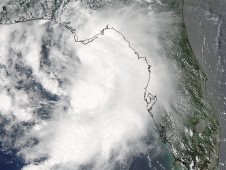 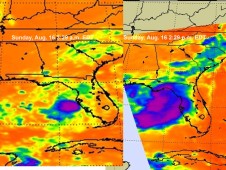 > View larger image
This is a time series of two AIRS images of Claudette on Aug. 16 at 3:29 a.m. EDT (left) and 2:29 p.m. EDT (right) showing the cold temperatures in her thunderstorms, indicative of heavy rainfall. Notice the storm's clouds about doubled in size over the 11 hour time.
Credit: NASA/JPL, Ed Olsen Tropical Storm Claudette Makes Landfall in Florida, Moving Into Mississippi

By mid-day today, Monday, August 17, Claudette's center had moved into southwestern Alabama and weakened into a tropical depression. She'll turn toward the north-northwest later today and soak Alabama with up to 10 inches of rain in some isolated areas.

At 2 a.m. EDT on Monday, August 17, Tropical Storm Claudette made landfall near Fort Walton Beach, Florida with maximum sustained winds near 50 mph. When it made landfall, tropical storm force winds extended 70 miles from the center, so towns from 70 miles to the east and west of Claudette's center received sustained winds over 37 mph.

The National Hurricane Center in Miami, Florida issued their last advisory on Claudette this morning at 7 a.m. EDT. Now, NOAA's Hydrometeorological Prediction Center (HPC) is issuing forecasts on Claudette as she moves through the interior U.S. At 10 a.m. EDT today, the HPC said that Claudette will track north-northwest through southwestern Alabama and northern Mississippi tonight.

The HPC expects "More precipitation to break out during the day across Alabama and the Florida panhandle mainly east of the circulation center." They "suspect that tonight there will be the potential for very heavy rainfall amounts near the center as it reaches into northern Mississippi, especially in overnight hours when convection often flares near the center of circulation. Still expect the potential for 3 to 6 inch totals with Claudette...and isolated totals up to 10 inches mainly within the stationary bands of rainfall across the Florida panhandle."

At 8 a.m. EDT the center of tropical depression Claudette was located near latitude 31.3 north and longitude 87.2 about, 15 Miles North-Northwest of Brewton, Alabama and about 85 miles southwest of Montgomery, Alabama. She was moving northwest near 12 mph. Claudette's sustained winds were down to 35 mph, and she'll continue to weaken today as she moves farther inland. The estimated minimum central pressure is 1011 millibars.

The National Weather Service in Tallahassee reported that the cities of Apalachicola and St. George areas saw a combined 4-6 inches of rain since Sunday morning. The highest wind gust in Apalachicola was reported at 50 mph.

NASA's Aqua satellite captured Tropical Storm Claudette on Sunday, August 16 at 2:30 p.m. EDT (1:30 p.m. CDT) about 12 hours before her eye made landfall near Fort Walton Beach, Florida. The image was captured by the Moderate Imaging Spectroradiometer (MODIS) instrument. The Atmospheric Infrared Sounder (AIRS) instrument that measures cloud temperature using infrared light. The higher the clouds are, the colder they are. One interesting thing that AIRS showed forecasters was that the extent of the cloud cover almost doubled in 11 hours on Sunday, August 16 between 3:29 a.m. EDT and 2:29 p.m. EDT, when AIRS captured images of Claudette.

Now, residents of Alabama and Mississippi should expect heavy downpours and localized flooding from Claudette's rains. The system is expected to move toward the northwest and by tomorrow it is expected to have weakened to a depression over western Tennessee. 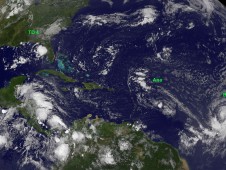 Tropical Depression 4 formed from the low pressure area that NASA's GOES satellite saw on Friday, August 14. On Sunday, August 16 the low was poised to make landfall in the Florida panhandle but not until it strengthens into Tropical Storm Claudette later on Sunday.

Tropical Storm Warnings are in effect on Sunday, August 16 from the Alabama/Florida border east to Suwanee River. At 8 a.m. EDT August 16, Tropical Depression 4 was 125 miles south-southeast of Apalachicola, FL with sustained winds near 35 mph. It was centered near 28.1 north and 84.1 west with a minimum central pressure near 1011 millibars.

TD4 is expected to make landfall tonight on the Florida panhandle bringing 3-5 inches of rain with isolated areas up to 10 inches, and a 3-5ft. storm surge along the coast. It will then track north into Alabama on Monday.

Residents should be prepared for gusty winds and flooding rains. For updates, visit the National Hurricane Center website at http://www.nhc.noaa.gov.

Tropical Depression 2 did become Tropical Storm Ana on Saturday, August 15 and is moving west toward Leeward Isles, Puerto Rico, Dominican Republic over the next couple of days. Maximum sustained winds are near 40mph.

The third area in Atlantic forecasters were watching near Africa has now strengthened into Tropical Storm Bill with sustained winds near 45 mph. 1,640 miles east of the Lesser Antilles.

The GOES-12 satellite captured TD4 poised to make landfall in the Florida Panhandle, Tropical Depression Ana just east of the Lesser Antilles, and Tropical Storm Bill far to the east in the open ocean. The NASA GOES Project is operated out of the NASA Goddard Space Flight Center in Greenbelt, Md. and creates imagery from the GOES satellite data.

Finally, in the Eastern Pacific, Hurricane Guillermo weakened with sustained winds near 100mph. He is still in the open ocean about 1,150 miles east of Hilo, Hawaii and no threat to land.

In infrared imagery, NASA's false-colored purple clouds are as cold as or colder than 220 Kelvin or minus 63 degrees Fahrenheit (F). The blue colored clouds are about 240 Kelvin, or minus 27F. AIRS visualized most of Guillermo's clouds in purple, meaning they're very cold and very high.

On Friday, August 14 at 5 a.m. EDT, Guillermo had maximum sustained winds near 75 mph and will strengthen a little, but then it's going to run into colder waters. Surface water temperatures colder than 80 degrees Fahrenheit are too cold to provide power to tropical cyclones to keep their strength, so he'll weaken over the weekend.

Hurricane Guillermo was located 1,100 miles west-southwest of the southern tip of Baja California, near 17.6 north latitude and 125.9 west longitude. Guillermo was moving west near 15 mph and will turn west-northwest over the weekend. Estimated minimum central pressure is 987 millibars.

Over the weekend of Aug. 15-16, Guillermo will encounter the colder waters and will drop back to tropical storm status and continue to weaken. 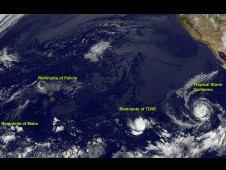 > View larger image
GOES-11 captured all four tropical areas in the Pacific on Aug. 13 at 8 a.m. EDT: from left to right, the remnants of Maka and Felicia, then TD9E and finally,Tropical Storm Guillermo, which looks pretty impressive west of the Mexican coast.
Credit: NASA/GOES Project 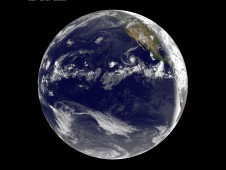 > View larger image
This is a "full-disk" image of the Earth taken by GOES-11. In the image, north of the equator, you can see where GOES-11 captured all four tropical areas in the Pacific on Aug. 13 at 8 a.m. EDT: from left to right, the remnants of Maka and Felicia, then TD9E and finally,Tropical Storm Guillermo.
Credit: NASA/GOES Project GOES-11 Sees Tropical Cyclones Fizzling and Forming in the Eastern Pacific!

There are a lot of ups and downs in tropical cyclone formation in the Pacific Ocean this week, and that's keeping NOAA's GOES-11 satellite busy. There are remnants of Maka and Tropical Depression 9E, a fizzled Felicia, and a new Tropical Storm named Guillermo.

The graphics folks that create images from the satellite at the GOES Project at NASA Goddard Space Flight Center in Greenbelt, Md. are posting updated images on the GOES Project website often and forecasters are watching them.

In the Central Pacific Ocean, Maka and Felicia are now a memory. Felicia dissipated before it reached Hawaii, and the remnants of Maka are 1,400 miles west-southwest of Kauai. Maka's remnant clouds and showers are still moving west, and it's unlikely that it will re-organize. That means a quiet Central Pacific Ocean for the next two days.

The remnants of TD9E are weakly spinning to around 30 mph, while it continues moving west-southwest near 9 mph. The center was located about 1,750 miles west-southwest of the southern tip of Baja California, near 13.9 north and 134.1 west. The National Hurricane Center noted that shower and thunderstorm activity has increased this morning, and the environment seems to be a little more conducive to strengthening, so TD9E isn't written off yet. In fact, there's about a 30-50% chance it may strengthen back into a tropical depression.

Meanwhile, Tropical Depression 10E gained strength took the name Guillermo and it's sustained winds whipped up to near 50 mph. Guillermo is moving west-northwest near 16 mph and will continue in that direction. Guillermo is closer to mainland Mexico, but poses no threat as its heading away from land. On Aug. 13 at 5 a.m. EDT the storm was located 805 miles west-southwest of the southern tip of Baja California near 16.9 north and 120.5 west. His minimum central pressure is 999 millibars. Guillermo is moving into a favorable environment, so he's expected to continue strengthening.

Even though the peak of hurricane season in the eastern and central Pacific Oceans are a month away, it seems like we're already there.