Tropical Depression 2 on Shaky Ground, 3 Other Areas to Watch on Weekend

The Atlantic Ocean's second Tropical Depression has been on shaky ground since it formed early in the week of August 11. It meandered westward from the African coast and maintained its tropical depression status until weakening to a remnant low. Now it has the potential to come back. In addition to Tropical Depression 2, there are three other areas forecasters are watching in the Atlantic Basin. Residents of Florida should particularly be watchful as there's a potential for tropical development on both the east and west coasts this weekend.

> View larger image
QuikScat image taken on August 12 at 4:40 p.m. EDT showed a good circulation around the center of tropical depression 2. However, since then, the winds have waned. Credit: NASA JPL, Peter Falcon At 5 p.m. EDT on Aug. 13, Tropical Depression 2 (TD2) in the Atlantic Ocean was downgraded to a remnant low pressure area. If you're a tropical cyclone, you can't get any lower than that, aside from total dissipation. At that time, TD2's remnants were about 930 miles west of the southernmost Cape Verde Islands off the African coast.

The Atmospheric Infrared Sounder (AIRS) instrument on NASA's Aqua satellite measures cloud top temperature and pressure, and it captured a look at the remnants of Tropical Depression 2, and it was still maintaining somewhat of a circular shape. In infrared imagery, NASA's false-colored purple clouds are as cold as or colder than 220 Kelvin or minus 63 degrees Fahrenheit (F). The blue colored clouds are about 240 Kelvin, or minus 27F. The colder the clouds are, the higher they are, and the more powerful the thunderstorms are that make up the cyclone.

In addition to TD2's struggle for life, there other three areas forecasters will be watching over the weekend and residents of Florida should keep an eye on both coasts for tropical development of two of the three systems. 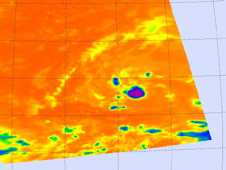 > View larger image
The AIRS instrument on NASA's Aqua satellite captured an image of Tropical Depression 2's cloud temperatures on August 13 at 2:17 p.m. EDT. Credit: NASA JPL, Ed Olsen Farthest from the U.S. is the area of showers and thunderstorms with the greatest potential for developing into a tropical cyclone over the weekend. On Aug. 14, that area of disturbed weather was located 250 miles west-southwest of the southern Cape Verde Islands. It has a "greater than 50 percent chance of developing."

Much closer to the U.S. are two areas with less than a 30 percent chance of development. One area of showers and thunderstorms are associated with a tropical wave that stretches from the Bahamas to Hispaniola. The other area is in the Gulf of Mexico, associated with a weak elongated area of low pressure. The area is centered off the coast from Tampa, Florida. Residents of Florida should be on watch this weekend, as tropical development is possible around them on both the east and west coasts. For the latest updates, visit: www.nhc.noaa.gov. 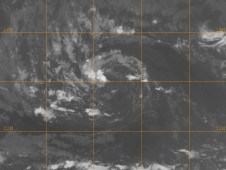 > View larger image
NASA’s Terra satellite flew over Tropical Depression Two at 9:11 a.m. EDT (1311 UTC) on August 13 and the image revealed very sparse cloud cover associated with the depression, indicating a weak storm.
Credit: NASA/NRL The second tropical depression in the Atlantic Ocean is stubbornly clinging to life, and NASA satellite imagery confirms that it’s a weak storm. Meanwhile, there are two other areas in the Atlantic that forecasters are eyeing for possible development.

Today, August 13, Tropical Depression number 2 is holding onto maximum sustained winds near 30 mph, and isn't expected to strengthen much in the next several days. It's just expected to stay "depressed" as it keeps moving westward near 9 mph. The depression is located about 885 miles west of the southernmost Cape Verde Islands, near latitude 14.0 north and longitude 37.6 west. Minimum central pressure was 1008 millibars.

Satellite imagery indicated this morning, August 13 that there were only a few showers and thunderstorms associated with Tropical Depression 2 (TD2), and if it continues to be this weak, the system will be downgraded to a remnant low pressure area. NASA's Advanced Microwave Scanning Radiometer-E, which looks at precipitable water, that is, water in the clouds that can rain down, indicated an area of drier air has almost totally wrapped around the depression, and dry air can kill a tropical cyclone.

The Moderate Resolution Imaging Spectroradiometer on NASA’s Terra satellite flew over TD2 at 9:11 a.m. EDT (1311 UTC) on August 13 and revealed a very weak system in terms of its cloud cover.

There are other two areas in the Atlantic that forecasters are watching, and one may hold greater promise in becoming a tropical storm. The first area, which has a low chance of organizing (less than 30 percent) is associated with a tropical wave stretching north to south and about to move through Puerto Rico. It's producing disorganized showers and thunderstorms.

The second, more favorable area is located to the east of TD2, just off the African coast. In that area, showers and thunderstorms are associated with a broad area of low pressure some 250 miles south-southeast of the Cape Verde Islands. The National Hurricane Center is giving that area a 50 percent chance of development. Right now, it's a tropical race to see which system, either this one, or Tropical Depression 2 strengthens enough to become Tropical Storm Ana 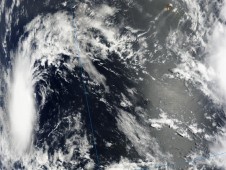 > View larger image
NASA's Terra satellite captured Tropical Depression 2 on August 12 using the Moderate Imaging Spectroradiometer (MODIS) instrument. It showed a good round circulation, indicating that the storm is likely strengthening.
Credit: NASA, MODIS Rapid Response Tropical Depression 2 has a good round shape, at least that's how it appears on the latest satellite imagery from NASA's Terra satellite on August 12.

Terra flew over Tropical Depression 2 (TD2) on August 12 at 8:25 a.m. EDT (12:25 UTC), and its Moderate Imaging Spectroradiometer (MODIS) instrument captured a good image of the storm. Although the storm is 630 miles west of the southernmost Cape Verde Islands (off the African coast).

TD2 is currently still just below tropical storm strength, and when she becomes a tropical storm, she'll be the first in the Atlantic Ocean and will get the name "Ana."

At noon time EDT on Wed. August 12, TD2 had maximum sustained winds near 35 mph and was forecast to strengthen slowly. It was located near 14.3 north and 33.8 west, and was moving west near 13 mph. Its minimum central pressure was 1006 millibars.

Another NASA Satellite came into play with the forecast on Tropical Depression 2: QuikScat. The National Hurricane Center uses QuikScat wind imagery to get a look at the winds around the center of a storm. The discussion from today says, "A Quikscat overpass at (4:12 a.m. EDT) 0812z did not show Tropical-storm-force wind vectors that looked reliable. Thus...the Initial intensity remains 30 knots (35 mph) for this advisory." 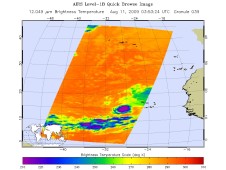 The National Hurricane Center in Miami, Fla., who forecasts storms in the Atlantic Ocean noted in their discussion today, "Sea surface temperatures along the forecast track will be marginally warm...and the depression will have to endure some dry air in the mid-levels. Nonetheless, vertical [wind] shear is expected to be light enough during the first four days or so to allow some slow strengthening.