Marco Made Landfall in Mexico and Dissipated in Twelve Hours 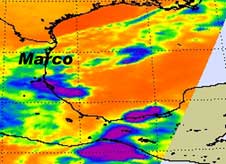 The final official position of Marco's remnants was 20.0 north latitude and 97.5 west longitude at 11 p.m. EDT on Oct. 7. That's about 70 miles south of Tuxpan, Mexico and 100 miles west-northwest of Veracruz, Mexico. At that time, Marco's sustained winds dropped to near 20 knots.

The National Hurricane Center noted "The only remaining threat with this system is locally heavy rains and the potential for flash flooding over eastern portions of central Mexico during the next day or so."

The image above was made from data captured by the Tropical Rainfall Measuring Mission (TRMM) satellite on Oct. 7 at 5:20 UTC (1:20 a.m. EDT). This TRMM image shows the horizontal pattern of rain intensity within Marco. The center is located near the yellow, green and red areas, which indicate rainfall between 20 and 40 millimeters (.78 to 1.57 inches) per hour. The very tiny red areas are considered moderate rainfall.

For more information about how TRMM looks at rainfall, visit NASA's TRMM website at: http://trmm.gsfc.nasa.gov/. TRMM is a joint mission between NASA and the Japanese space agency JAXA.

This infrared image of the tiny remnants of Marco was created by data from the Atmospheric Infrared Sounder (AIRS), an instrument that flies aboard NASA's Aqua satellite. The image was created on Wednesday, Oct. 8 at 8:17 UTC (4:17 a.m. EDT). In the image, the little spot on the Gulf Coast of Mexico are the clouds that remain from Marco. 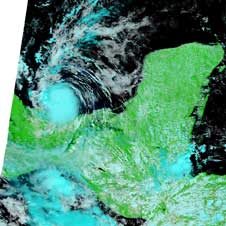 > Larger image
Credit: NASA/Jesse Allen/MODIS Rapid Response Team The thirteenth tropical depression in the Atlantic Ocean basin this season strengthened into Tropical Storm Marco around 5 p.m. EDT on October 6. Marco is very close to the southeastern Mexican coast in the Bay of Campeche, and is expected to make landfall in that region later today, Oct. 7.

At 8:00 a.m. EDT on October 7, Marco's maximum sustained winds were near 65 mph and some strengthening is possible so, Marco could be near hurricane strength when it reaches the coast. Marco's center was about 80 miles southeast of Tuxpan, Mexico at 8 a.m. That's near 20.2 degrees north latitude and 96.5 degrees west longitude. Marco continues to move west-northwest near 8 mph. The estimated minimum central pressure is 998 millibars.

This image from the Moderate Resolution Imaging Spectroradiometer (MODIS) on NASA’s Terra satellite on October 6 shows Marco poised for landfall on the Mexican coast. Note that at the time of this image, there was no visible eye. Marco is an extremely small tropical cyclone. Tropical storm force winds only extend outward up to 10 miles from the center.

Warnings and Watches are already posted for the area where Marco is now and is heading. A tropical storm warning and a hurricane watch remain in effect from Cabo Rojo, Mexico southward to Veracruz. The National Hurricane Center says that "Tropical storm conditions are expected and hurricane conditions are possible within the warning area later today [Oct. 7]."

The southern and central Mexican states of northern Veracruz, northern Puebla, Hildalgo and San Luis Potosi can expect a soaking from Marco. Marco is expected to produce total rainfall amounts of 2 to 4 inches with as much as 6 inches possible. 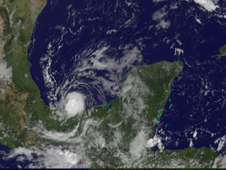 Credit: NOAA/NASA GOES Project
> Larger image It was only a matter of time, as we've just passed the official peak of the Atlantic hurricane season (mid-September), and the thirteenth tropical depression has now officially formed.

Tropical Depression 13 (TD13) formed in the Bay of Campeche, Gulf of Mexico around 11 a.m. EDT on October 6. Specifically, it's located about 140 miles east of Veracruz, Mexico, near latitude 19.0 north and 94.1 west.

TD13 is moving west-northwest near 10 mph and will continue in that direction for the next day. Its maximum sustained winds were near 35 mph, and some strengthening is forecast in the next 24 hours meaning it should become a tropical storm before making landfall. The minimum central pressure was 1007 millibars.

Rainfall will be the big threat to the southern Mexican states of Veracruz, Northern Oaxaca and Tabasco. Those areas can expect between 2 and 4 inches with isolated amounts to 6 inches of rain.

This satellite image was captured on October 6 at 14:31 UTC (10:31 a.m. EDT) from the Geostationary Operational Environmental Satellite (GOES-12). TD13 is the circular area of clouds in the lower left part of the image. It is also left of Mexico's Yucatan Peninsula which is at the bottom center of the image jutting into the Gulf of Mexico.

GOES is operated by the National Oceanic and Atmospheric Administration. It was created by NASA's GOES Project, located at NASA's Goddard Space Flight Center, Greenbelt, Md.