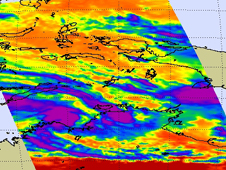 Credit: NASA/JPL
> Larger image The hurricane season in the southern hemisphere is already under way as nine tropical cyclones formed since the season began. The first storm of 2008, however, formed near Australia on January 3.

Helen was moving east-northeast near 11 knots (12 mph) and had maximum sustained winds near 45 knots (52 mph). Helen is expected to intensify over water through the next 12 hours before it crosses back over land.

The AIRS image shows the temperature of the cloud tops or the surface of the Earth in cloud-free regions. The lowest temperatures (in purple) are associated with high, cold cloud tops associated with the lingering showers and thunderstorms. Helen's clouds and rains are in the purple and blue areas to the left center of the image.

The infrared signal does not penetrate through clouds. Where there are no clouds the AIRS instrument reads the infrared signal from the surface of the Earth, revealing warmer temperatures (red). The sharp lines around the rectangular image are the outlying borders of the "picture" AIRS captured.