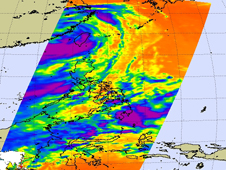 Credit: NASA/JPL
> Larger image More than 600,000 people had to be evacuated as Typhoon Fung-Wong made landfall on China's southeastern coast Tuesday, July 29.

Fung-wong, is Cantonese for "Phoenix," and after all the flooding it caused, China hopes it doesn't rise again like its namesake.

By July 30, Fung-Wong had been losing strength and moving north. Forecasters expect that it will linger over east China's Jiangxi province for a couple of days.

Before Fung-Wong's eye actually even made landfall, it dropped almost 8 inches of rainfall on Monday in Fuqing City in the Fujian province. Reports also indicated that Fujian's Puxia county suffered power failures when almost 500 transformer stations were damaged from the storm. Fujian authorities evacuated 274,300 people, while in neighboring Zhejiang, over 338,000 people were evacuated.

This infrared image of Fung-Wong was created by data from the Atmospheric Infrared Sounder (AIRS), an instrument that flies aboard NASA's Aqua satellite. The image, showing about 2/3rds of the storm because the satellite overpass wasn't directly overhead, was created on July 28 at 17:23 UTC (1:23 p.m. EDT) when it was making landfall in southeast China.

The AIRS images show the temperature of the cloud tops or the surface of the Earth in cloud-free regions. The lowest temperatures (in purple) are associated with high, cold cloud tops that make up the top of Fung-Wong. The AIRS data creates an accurate 3-D map of atmospheric temperature, water vapor and clouds, all of which are helpful to forecasters. 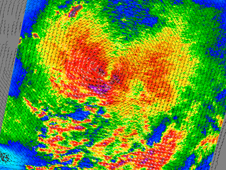 Credit: NASA/JPL
> Larger image The Summer Olympics has an early visitor in the form of Tropical Storm Fung-Wong, and three NASA satellites are keeping an eye on it: CloudSat, QuikSCAT and Aqua.

The image from NASA's QuikSCAT satellite was taken at 5:38 a.m. EDT July 25. It depicts Fung-Wong's wind speed in color and wind direction with small barbs. White barbs point to areas of heavy rain. The highest wind speeds, are shown in purple, which indicate winds over 40 knots (46 mph).

Maximum sustained winds were near 60 knots (69 mph), with gusts to 75 knots (86 mph). Fung-Wong has tracked northwestward at 12 knots (13 mph) early in the day, and generated wave heights up to 24 feet high.

Fung-Wong tracked generally northwestward across central Taiwan. As the Joint Typhoon Warning Center expected, the transit over Taipei had considerably weakened the system with the eye readily dissolving into tightly curved banding and an associated loss of deep convection (rapidly rising air that forms thunderstorms).

Fung-Wong is expected to make landfall late today as a strong tropical storm between Hong Kong and Shanghai, China. By Wednesday, July 31, Fung-Wong is forecast to dissipate inland. 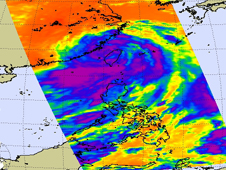 Credit: NASA/JPL
> Larger image This satellite image of Fung-Wong was created by data from the Atmospheric Infrared Sounder (AIRS) on NASA's Aqua satellite.

It shows the temperature of Fung-Wong's cloud tops on June 25, 6:05 UTC (2:05 a.m. EDT) as it continues making landfall into China, north of Hong Kong. The lowest temperatures (in purple) are associated with high, cold cloud tops that make up Fung-Wong's center. There are large areas of strong convection (rising air and rainfall) shown here in purple. Where there are no clouds the AIRS instrument reads the infrared signal from the surface of the Earth (over both land and water), revealing warmer temperatures (red).

NASA'S CloudSat Gives a Side View of Fung-Wong 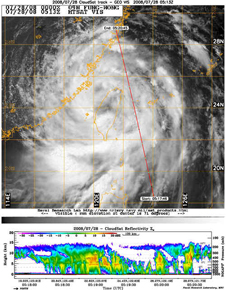 The top image is from the MTSAT satellite, supplied through the U.S. Naval Research Laboratory and shows the top of Fung-Wong at the same time as the CloudSat image below it, shows what Fung-Wong looked like sideways.

The red line through the MTSAT satellite image shows the vertical cross section of radar, basically what Fung-Wong's clouds looked like sideways. The colors indicate the intensity of the reflected radar energy. The top of Fung-Wong's clouds reach more than14 kilometers, almost nine miles high!

The blue areas along the top of the clouds indicate cloud ice, while the wavy blue lines on the bottom center of the image indicate intense rainfall. Notice that the solid line along the bottom of the panel, which is the ground, disappears in this area of intense precipitation. It is likely that in the area the precipitation rate exceeds 30mm/hr (1.18 inches/hour) based on previous studies.