This GOES satellite image from September 2 shows Gustav (over Texas), Hanna (in the Bahamas), Ike and Josephine (both over open water). Credit: NASA/NOAA GOES Project
> Larger image
For the first time in the 2008 hurricane season, there are four tropical cyclones active in the Atlantic Ocean basin on one day (Sept. 2). September is considered the peak of the Atlantic Ocean hurricane season, and in the first week of September there were four tropical cyclones that forecasters were watching.

Why is September the peak month for hurricanes? NASA oceanographer, Bill Patzert at the Jet Propulsion Laboratory, Pasadena, Calif., provided the answer: "Hurricanes are fueled by warm ocean temperatures and September is the end of the Northern Hemisphere ocean warming season. The 2008 Atlantic hurricane season started early with the formation of Tropical Storm Arthur on May 30, from the remnants of the eastern Pacific Ocean's first storm, Alma, which crossed Central America and reformed in the Gulf of Mexico. It took one month and four days for the next storm to form, Bertha. Now, the action is definitely picking up. The tropical Atlantic is warm, but not unusually so. In the tropical Atlantic, Caribbean and Gulf of Mexico, temperatures are certainly well above the 80 degree Fahrenheit threshold, so conditions are ripe for generating and sustaining major tropical storms and hurricanes."

Once a powerful Category 3 hurricane, now a tropical depression, Gustav moved from northwest Louisiana into northeastern Texas and into Arkansas by Sept. 3. Like Tropical Storm Fay in August, Gustav's legacy will lie in large rainfall totals. According to the National Hurricane Center's discussion on Sept. 2, "Storm total rainfalls are expected to be five to ten Inches with isolated maximums of 15 inches over portions of Louisiana, Arkansas and Mississippi. Rainfall amounts of 4-8 inches have been already reported in parts of Alabama, Mississippi and Louisiana." 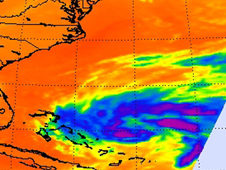 This satellite image is from the Atmospheric Infrared Sounder on NASA's Aqua satellite. It shows the temperature of Hanna's cloud tops on September 4 at 2:47 a.m. ET. Credit: NASA/JPL
> Larger image Meanwhile, Tropical Storm Hanna formed near the Leeward Islands from the eighth tropical depression. Observed by the Tropical Rainfall Measuring Mission (TRMM) satellite to contain a deep and intense thunderstorm tower on Sept. 1 (often a precursor to intensification), it subsequently strengthened briefly into a hurricane before weakening under the influence of vertical wind shear (winds that can weaken or tear a tropical cyclone apart). On Sept. 3 and 4 Hanna was pounding the Bahamas with heavy rains and tropical storm force winds, according to the National Hurricane Center.

The ninth tropical depression of the year formed some 1,200 miles east of the Leeward Islands and has blown up into Tropical Storm Ike. On Sept. 4, Ike strengthened into a major hurricane, Category 4 on the Saffir-Simpson Scale, with maximum sustained winds near 145 mph. Ike is forecast to head west and may also affect the Bahamas.

Behind Ike, on Sept. 2, the tenth tropical depression in the Atlantic Ocean basin was born. Tropical Depression 10 formed west of the African coast, so it has a long way to go before it has any impact on the U.S. or the Caribbean. By the late morning, that tropical cyclone became Tropical Storm Josephine.

In August, Fay's ten-day romp from the U.S. Southeast northward up the Appalachian Mountains seemed like a harbinger for September's storms. Fay took her time going northward and dumped tremendous amounts of rain along the way. Melbourne Beach, Fla., received as much as 25.28 inches of rain. Other cities in various states reported high totals: Thomasville, Ga., reported 17.43 inches; Camden, Ala., received 6.85 inches; Beaufort, S.C., received 6.11 inches; Carthage, Tenn., reported 5.30 inches, and Charlotte, N.C., reported 5.90 inches. Fay was a perfect example of how weaker tropical storms can cause flooding inland.

"Our findings [in a recent journal article] indicate that weak tropical systems could significantly contribute to rainfall totals,” said Marshall Shepherd, lead author of a NASA-funded study that appeared in a December 2007 issue of the American Geophysical Union’s Geophysical Research Letters. "These types of storms are significant rain producers. The larger hurricanes aren’t frequent enough to produce most of the actual rain during the season and therefore are not the primary storm type that relieves drought in the region."

Conditions in the Atlantic this year are favorable for an active season because of warm sea surface temperatures and low wind shear (winds that tear a tropical cyclone apart). "Although La Nina conditions in the equatorial Pacific Ocean have subsided, the atmospheric jet stream over North American and the North Atlantic are still retaining some characteristics of the faded La Nina," Patzert said. "The upper atmospheric winds that could shear the tops off tropical storms are staying north, allowing tropical storms to develop and grow into hurricanes."

As Gustav has shown, a powerful, land-falling storm can impact millions of people and do billions of dollars of damage. As we approach the mid-September peak in hurricane activity, hurricane experts are on high alert and the residents of the Caribbean Islands, Central America, and the American Gulf and East coasts should be prepared for additional hurricane activity.