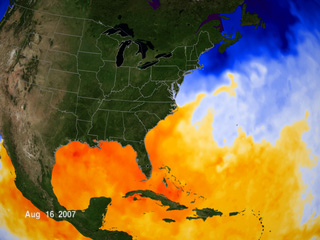 Sea surface temperatures are one of the key ingredients for tropical cyclone formation and they were warming up in the Gulf of Mexico, Caribbean and eastern Atlantic Ocean by the middle of August. As a result, they helped spawn Hurricane Dean in the central Atlantic, and Tropical Storm Erin in the Gulf of Mexico, both during the week of August 13.

These areas or warm sea surface waters (80 degrees F or higher) are depicted in yellow, orange, and red. This data was taken by the Advanced Microwave Scanning Radiometer - EOS (AMSR-E) instrument aboard the Aqua satellite. This animation updates every 24 hours.

This animation shows the progression of warm waters slowly filling the Gulf of Mexico (shown in yellow, orange, and red). This natural annual warming contributes to the possible formation of hurricanes in the Gulf. Sea surface temperature data shown here ranges from January 1, 2007 to the present.

NASA's Bill Patzert, oceanographer at the Jet Propulsion Laboratory, Pasadena, Calif. said, "The many Atlantic and Gulf citizens still reeling from the shock of the 2004 and 2005 Atlantic hurricane seasons, received some good news … the Atlantic sea surface temperatures that fuel hurricanes are somewhat cooler than the past few years. Based on this, some forecasters have reduced their forecasts. But the news is mixed."

When asked what factors forecasters are watching, Patzert said "The jet stream has remained stubbornly north, the possibility of a late-developing La Nina is lurking and Gulf of Mexico and Caribbean sea surface temperatures are ripe for late-season hurricane development."

While the experts debate, Gulf and Atlantic coast residents should definitely be prepared. A forecast for an above or below average hurricane season is just an academic exercise if a community is hit.