Smaller Storms Drop Larger Overall Rainfall in Hurricane Season
Researchers have found that when residents of the U.S. southeastern states look skyward for rain to alleviate a long-term drought, they should be hoping for a tropical storm over a hurricane for more reasons than one. According to a new study using NASA satellite data, smaller tropical storms do more to alleviate droughts than hurricanes do over the course of a season by bringing greater cumulative rainfall. 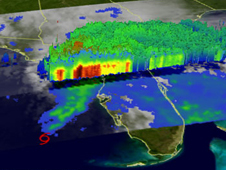 Tropical Storm Barry, a weak tropical depression, brought much-needed rain to Florida and parts of the southeast in June 2007, a region suffering from severe drought. NASA's Tropical Rainfall Measuring Mission satellite captured the intensity of the storm's rainfall on June 2. Click image for enlargement. Credit: NASA A new study that provides insight into what kind of storms are best at tackling drought in the southeastern United States. The study focuses on a decade of first-ever daily rainfall measurements by a NASA satellite carrying a weather radar in space. The study's authors believe the same insights can be applied by meteorologists and public officials to other regions where daily satellite rainfall data and storm tracking data are available.

In the wake of Hurricane Katrina, meteorologist Marshall Shepherd, an associate professor of geography and atmospheric sciences at the University of Georgia, Athens, and colleagues delved into the ongoing debate about whether global warming is leading to an increase in rainfall intensity. The researchers wanted to determine how much rainfall each type of cyclone, from tropical depressions to category five hurricanes, contributes to overall rainfall. They focused the study on the Southeast in the hope that results could be harnessed to improve drought relief information for the region. Their findings were published today in the American Geophysical Union’s Geophysical Research Letters.

"As much of the Southeast experiences record drought, our findings indicate that weak tropical systems could significantly contribute to rainfall totals that can bring relief to the region,” said Shepherd, lead author of the NASA-funded study. "These types of storms are significant rain producers. The larger hurricanes aren’t frequent enough to produce most of the actual rain during the season and therefore are not the primary storm type that relieves drought in the region." 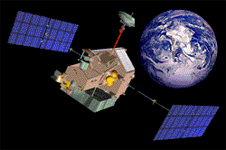 From its low-earth orbit, NASA's Tropical Rainfall Measuring Mission satellite has been providing valuable information on rainfall using a combination of passive microwave and active radar sensors, including the first precipitation radar in space. Credit: NASA Shepherd created a new measurement method as an efficient way to get a real sense for how much rainfall each type of storm contributes in a given year around the coastal regions of the southeastern U.S. To do so, he had to distinguish an average rainfall day from an extreme rainfall day. Though data from NASA’s Tropical Rainfall Measuring Mission (TRMM) satellite could offer daily rainfall amounts, the data could not be used to set apart whether rainfall was average or extreme for any given day.

Shepherd and his team modeled their metric on the "cooling degree day" that energy companies use to relate daily temperature to energy needs for air conditioning. A cooling degree day is found by subtracting 65 degrees from the average daily temperature. Values larger than zero give some indication whether a day was abnormally warm. Shepherd used daily rainfall data from TRMM to determine 28.9 as the base value of average daily rainfall at one of the world’s wettest locations, Maui’s Mount Wailea in Hawaii. In the same way as the cooling degree day, the "millimeter day" metric is calculated by subtracting 28.9 millimeters from the average daily rainfall in each of four ocean basins along coastal areas scattered across the south near Houston and New Orleans, east of Miami and south of North Carolina. Values greater than zero indicate a so-called "wet millimeter day" of extreme rainfall.

The team found that the most extreme rainfall days occurred in September and October, two of the busiest months of the Atlantic hurricane season. They also found that though major hurricanes produced the heaviest rainfall on any given day, the smaller tropical storms and depressions collectively produced the most rainfall over the entire season. Over half of the rainfall during the hurricane season attributed to cyclones of any type came from weaker tropical depressions and storms, compared to 27 percent from category 3-5 hurricanes. 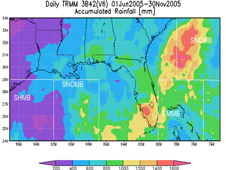 Researchers used the measurement of hurricane season rainfall (in millimeters) in ocean basins along several southeastern coastal areas, like these taken in 2005, to determine what class of storm delivered more cumulative rainfall. Click image for enlargement. Credit: NASA TRMM has transformed the way researchers like Shepherd measure rainfall by providing day-to-day information that did not exist before the satellite's 1997 launch. "Though we've had monthly rainfall data available since 1979 from other sources, it’s the daily rainfall data that allows us to see that tropical storm days contributed most significantly to cumulative rainfall for the season due to how frequently that kind of storm occurs," said Shepherd.

"It’s important in the future to build a longer record of daily rainfall to establish, with better confidence, whether trends are occurring," said Shepherd. "This study sets the stage for us to understand how much rainfall weak and strong tropical cyclones contribute annually and whether this contribution is trending upward in response to global warming-fueled growth in tropical cyclones."

Shepherd believes advances that will improve study of cyclones and rainfall are "just around the corner" with NASA’s Global Precipitation Measurement satellite, scheduled for launch in 2013. An extension of TRMM's capabilities, it will measure precipitation at higher latitudes, the actual size of snow and rain particles, and distinguish between rain and snow.