The Atlantic Hurricane Season began early in 2007, and by mid-December it was still going. The season officially begins June 1 and ends Nov. 30. That means that for the most part, storms have formed and fizzled between those dates, or they used to.

NASA satellites were watching and providing data from the beginning when Andrea kicked off the season on May 9 when she formed 150 miles northeast of Daytona Beach, Florida. On Dec. 10, 2007, Sub-Tropical Storm Olga formed to the east of Hispaniola.

The hurricane season produced 2 tropical depressions and 15 tropical storms, six of which became hurricanes. That's a little more than average. The storms that became hurricanes were: Dean, Felix, Humberto, Karen, Lorenzo and Noel.

Twelve days after Dean's first landfall, Hurricane Felix made landfall near Punta Gorda, Nicaragua on Sept. 2 with sustained winds of 160 mph. Dean was also noteworthy for another reason, it was the first Category 5 hurricane to make an Atlantic Ocean basin landfall since 1992, when Andrew hit south Florida.

Which Ones Affected the Mainland U.S.?

The mainland U.S. was hit by five storms during the 2007 Atlantic Hurricane Season. There was one hurricane, three tropical storms and one tropical depression that affected the U.S. Hurricane Humberto made landfall along the upper Texas coast on Sept. 13. Tropical storms that hit the U.S. were Barry, Erin and Gabrielle. Barry came ashore on June 2 near Tampa Bay, Florida. A weak Tropical Storm Erin hit southeast Texas on August 16. Tropical Storm Gabrielle made landfall along the Cape Lookout, North Carolina National Seashore on Sept. 9. Tropical Depression Ten made landfall near Fort Walton Beach, Florida late on Sept. 21.

NASA's Terra satellite's MODIS instrument captured Noel strengthening into a tropical storm on Oct. 28. Click image for enlargement. Credit: NASA MODIS Rapid Response
Erin is noteworthy because of the massive flooding that it produced in Oklahoma and Texas. Erin's highest rainfall totals through August 20 occurred well inland and were between 200 to 250 millimeters, or approximately 8 to 10 inches over central Oklahoma. The central Texas Gulf Coast also received a substantial amount of rain, between 100 to 200 millimeters or between 4 to 8 inches, where Erin made landfall.

Humberto Was the Season's Fastest Grower

It only took Humberto 24 hours to go from a tropical depression with sustained winds of 35 mph to a hurricane with sustained winds of 85 mph. There were only three other storms in recorded history that strengthened from a depression to a hurricane in 24 hours: Celia in 1970, and Arlene and Flora 1963. Other storms have intensified faster if one considers the net intensity change over 24 hours. For example, Wilma in 2005 went from a tropical storm to a Category 5 storm in less than 24 hours. That may be the most rapid rate of intensification ever, but starting from tropical storm stage rather than tropical depression stage.

Hurricane Noel was the deadliest storm of the 2007 season, as it killed 122 people in the Dominican Republic and Haiti when it passed through there as a tropical storm in late October. News reports indicated 664 homes were destroyed and an additional 15,600 were damaged in the Dominican Republic, while Haiti reported 4,850 houses damaged, 1,075 completely destroyed, and crop losses from floods and mudslides. 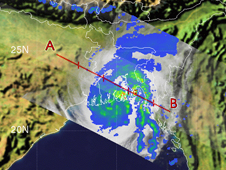 NASA's Tropical Rainfall Measuring Mission satellite captured Sidr's rains from space on Nov. 15. Sidr was the second strongest cyclone to make landfall in Bangladesh since 1877. Click image for enlargement. Credit: NASA
Oceanographer Bill Patzert from NASA's Jet Propulsion Laboratory, Pasadena, Calif. said "In May, NOAA's Climate Prediction Center and other long-range hurricane forecasters predicted an above normal Atlantic hurricane season (13-17 named storms and 7-10 hurricanes) based on ocean and atmospheric conditions, like a building La Nina. At season's end, 15 named storms and 6 hurricanes were generated leaving many forecasters scratching their heads. The good news was that U.S. Gulf and East Coast communities were cut a break in 2007 and avoided major hurricane damage this year. The bad news, with no rainfall relief from tropical storms or hurricanes, the record-breaking Southeast drought continued and deepened."

A Deadly Season in the Western Pacific and Indian Oceans

Other parts of the world weren't quite as fortunate as the U.S. this hurricane season. In the western Pacific and Indian Ocean regions, cyclones were very active.

The north Indian Ocean experienced a damaging and deadly 2007 hurricane (cyclone) season. In June, Category 5 Cyclone Gonu surged out of the Arabian Sea and struck Oman and Iran - nations that almost never experience cyclones - causing almost $4 billion in damage. In mid-November, Cyclone Sidr was spawned in the Bay of Bengal, grew to Category 5 intensity, and devastated Bangladesh. More than 4,000 died and tens of thousands of homes were leveled. Both of these Category 5 cyclones caused immense property damage and had crippling impacts in these emerging nations.

The end of December also marked the formation of the first cyclone near western Australia. Tropical cyclone Melanie developed at sea on Dec. 28, about 600 miles northwest of the coastal community of Broome, Australia. The season in that region normally runs from November to April. 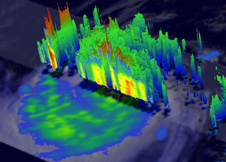 NASA satellites provided NASA and university scientists with innovative new views of hurricanes in both hemispheres and during all seasons. Using simultaneous, accurate measurements of cloud-top temperatures from the Moderate Resolution Imaging Spectroradiometer on NASA's Aqua satellite, and cloud-top height and cloud profiling information from NASA's CloudSat satellite, NASA and university scientists announced they developed a promising new technique for estimating the intensity of tropical cyclones from space. The method could one day supplement existing techniques, assist in designing future tropical cyclone satellite observing systems, and improve disaster preparedness and recovery efforts. This new technique was developed by scientists at NASA's Jet Propulsion Laboratory, Pasadena, Calif.; Colorado State University, Fort Collins, Colo.; and the Massachusetts Institute of Technology (MIT), Cambridge, Mass. The framework used by the team to estimate tropical cyclone intensity was developed by co-author Kerry Emanuel of MIT and his colleague Valerie Wong.

While several factors likely contributed to the sharp decrease in the number of hurricanes during 2007, research by William Lau, Chief of the Laboratory for Atmospheres at NASA's Goddard Space Flight Center, Greenbelt, Md. showed that Saharan dust may have a major effect on seasonal hurricane activity. Lau and his colleagues used data from the Moderate Resolution Imaging Spectroradiometer on NASA's Terra and Aqua spacecrafts to better understand the role of African dust storms in hurricane activity. Lau noted that Saharan dust through its radiative properties, spatial and temporal coverage and concentrations may play as big a role as other atmosphere-ocean conditions, like El Niño, and offer some predictive value, so they should be closely monitored to improve hurricane forecasts.

NASA's QuikSCAT provided information on surface wind direction and speed in storms and was useful for identifying when various storms first developed a surface circulation. In general, hurricane forecasters at the National Oceanic and Atmospheric Administration's (NOAA) National Hurricane Center used these data, experimentally, to improve forecasts of hurricane intensity and direction. One of their goals is too more precisely forecast hurricane landfalls and lessen the financial impacts of unnecessary evacuations.

Scott Braun, Meteorologist at NASA Goddard said, "The Tropical Rainfall Measuring Mission (TRMM) satellite and NASA's Aqua satellite's Advanced Microwave Scanning Radiometer (AMSR) data provided information on precipitation structure, changes in which can often reflect changes in intensity, as well as helped to provide more accurate locations on the centers of storms such as powerful storms like Dean and Felix, as well as all other storms."

"Further, QuikSCAT winds, TRMM and AMSR precipitation, and radiances from the Atmospheric Infrared Sounder (AIRS) on NASA's Aqua satellite were used as input into NOAA's operational forecast models," Braun said. "The TRMM multi-satellite precipitation analysis was used to monitor heavy rainfalls associated with Hurricane Noel and Tropical Storm Olga in the Dominican Republic and Haiti, where these storms did a great deal of damage and killed many people."