Forests Damaged by Hurricane Katrina Become Major Carbon Source
With the help of NASA satellite data, a research team has estimated that Hurricane Katrina killed or severely damaged 320 million large trees in Gulf Coast forests, which weakened the role the forests play in storing carbon from the atmosphere. The damage has led to these forests releasing large quantities of carbon dioxide into the atmosphere.

Image above: The devastation of southern Gulf Coast forests by Hurricane Katrina was documented in before-and-after images from the Landsat 5 satellite. The Interstate 10 "twin-span" bridges that cross Lake Pontchartrain east of New Orleans is seen here pre- and post-Katrina. Bayou Sauvage National Wildlife Refuge is the large patch of forest (green) the lower left portion of the LEFT image, which suffered heavy tree mortality (seen in red in the RIGHT image after the storm)". + Larger before image + Larger after image Credit: USGS

Young growing forests play a vital role in removing carbon dioxide, a greenhouse gas, from the atmosphere by photosynthesis, and are thus important in slowing a warming climate. An event that kills a great number of trees can temporarily reduce photosynthesis, the process by which carbon is stored in plants. More importantly, all the dead wood will be consumed by decomposers, resulting in a large carbon dioxide release to the atmosphere as the ecosystem exhales it as forest waste product. The team’s findings were published Nov. 15 in the journal Science. 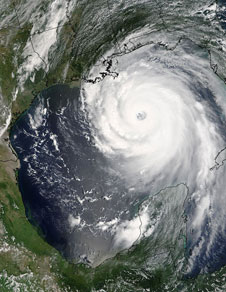 Image left: Hurricane Katrina was closing in on the Mississippi-Louisiana coastline and the adjacent Gulf Coast forests on Aug. 28, 2005, as glimpsed by a state-of-the-art instrument aboard NASA's Terra satellite. + Higher resolution image Credit: NASA

"The loss of so many trees will cause these forests to be a net source of carbon dioxide to the atmosphere for years to come," said the study's lead author Jeffrey Chambers, a biologist at Tulane University in New Orleans, La. "If, as many believe, a warming climate causes a rise in the intensity of extreme events like Hurricane Katrina, we're likely to see an increase in tree mortality, resulting in an elevated release of carbon by impacted forest ecosystems."

Young forests are valued as carbon sinks, which remove carbon dioxide from the atmosphere and store it in growing vegetation and soils. In the aftermath of a storm as intense as Katrina, vegetation killed by the storm decomposes over time, reversing the carbon storage process, making the forest a carbon source.

"The carbon cycle is intimately linked to just about everything we do, from energy use to food and timber production and consumption," said Chambers. "As more and more carbon is released to the atmosphere by human activities, the climate warms, triggering an intensification of the global water cycle that produces more powerful storms, leading to destruction of more trees, which then act to amplify climate warming." 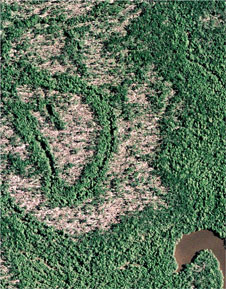 Chambers and colleagues from the University of New Hampshire in Durham, N.H., studied Landsat 5 satellite data captured before and after Hurricane Katrina to pull together a reliable field sampling of tree deaths across the entire range of forests affected by Katrina. They found that some forests were heavily damaged while others like the cypress-tupelo swamp forests fared remarkably well.

The NASA-built Landsat 5, part of the Landsat series of Earth-observing satellites, takes detailed images of the Earth’s surface. Chambers combined results from the Landsat image sampling with data from the Moderate Resolution Imaging Spectroradiometer instrument on NASA's Terra satellite to estimate the size of the entire forested area affected by Katrina. The instrument can detect minute changes in the color spectrum on the land below, enabling it to measure differences in the percentage of live and dead vegetation. This helps researchers improve their estimates of changes in carbon storage and improves their ability to track the location of carbon sinks and sources.

The field samples and satellite images, along with results from computer models that simulate the kind of vegetation and other traits that make up the forests, were used to measure the total tree loss the hurricane inflicted. The scientists then calculated total carbon losses to be equivalent to 60-100 percent of the net annual carbon sink in U.S. forest trees. "It is surprising to learn that one extreme event can release nearly as much carbon to the atmosphere as all U.S. forests can store in an average year," said Diane Wickland, manager of the Terrestrial Ecology Program at NASA Headquarters in Washington. "Satellite data enabled Chambers’ research team to pin down the extent of tree damage so that we now know how these kinds of severe storms affect the carbon cycle and our atmosphere. Satellite technology has really proven its worth in helping researchers like Chambers assess important changes in our planet’s carbon cycle."