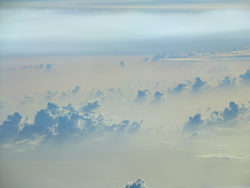 Determined to understand why some storms grow into hurricanes while others fizzle, NASA scientists recently looked deep into thunderstorms off the African coast using satellites and airplanes.

Image right: Dust associated with the Saharan Air Layer, taken from a NOAA aircraft northeast of Barbados in September 2006. Cumulus clouds can be seen poking through the tops of the dust layer, which is seen as a milky white haze. Click image to enlarge Credit: NOAA

During July and August 2006, a team of international scientists, including NASA researchers, journeyed to the west coast of Africa. Their mission was to better understand why some clusters of thunderstorms that drift off the African coast, known as easterly waves, develop into furious hurricanes, while others simply fade away within hours.

A major component of the campaign, called the NASA African Monsoon Multidisciplinary Analyses (NAMMA), was to study the Saharan Air Layer. The layer is a mass of very dry, dusty air that forms over the Sahara Desert and influences the development of tropical cyclones, the general name given to tropical depressions, storms and hurricanes. Budding hurricanes in the tropical Atlantic off the African coast often rapidly deteriorate when they interact with this stable air mass and its strong winds.

This mission was unique because it incorporated NASA's state-of-the-art technology in space and in the air. With sophisticated satellite data and aircraft, scientists are better able to examine the "tug-of-war" between forces favorable for hurricane development -- warm sea surface temperatures and rotating clusters of strong thunderstorms -- and forces that suppress hurricanes such as dust particles and changing wind speed and direction at high altitudes. 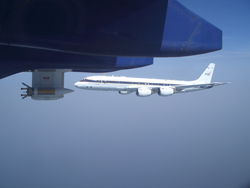 Image left: The NASA DC-8 aircraft flying with the BAe 146 aircraft off the coast of West Africa. The instrument mounted on the wing is a particle sensor that measures particle number density, concentration, condensed water content, precipitation rate, and other variables. Click image to enlarge Credit: University of Leeds

"Most late-season Atlantic basin hurricanes develop from African easterly waves, so improving our knowledge of these hurricane seedlings is critical," said Ramesh Kakar, program manager for NAMMA at NASA headquarters. "Several studies have shown that the Saharan Air Layer suppresses hurricane development, but the exact mechanisms are very unclear, and it remains a wild card in the list of ingredients necessary for hurricane formation."

NASA's Moderate Resolution Imaging Spectroradiometer instrument on the Terra and Aqua satellites identified the location, size, and intensity of dust plumes throughout the mission. Using other satellites, scientists could then determine any possible connection between dust outbreaks and changes in tropical easterly waves. The Tropical Rainfall Measuring Mission satellite, for instance, provided information on rainfall and thunderclouds, while the QuikSCAT satellite identified how low-level winds were rotating, both critical elements in hurricane formation. 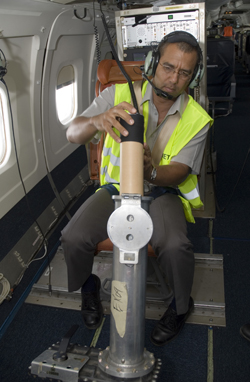 Scientists flew a total of 13 aircraft missions inside seven storm systems. NASA's DC-8 research aircraft contained numerous instruments to take measurements deep inside clouds, the environment of thunderstorms, and the Saharan Air Layer. Researchers also took advantage of several aircraft probes and especially dropsondes, a sensor attached to a parachute that is dropped into storm clouds. It typically collects data on wind speed and direction, temperature, humidity, and pressure that are relayed to a computer in the airplane.

Aircraft sensors and laser devices called lidars measured water vapor content and cloud, dust and precipitation particle sizes, shapes, and types. Revolutionary radar on the aircraft was also used to gather better details on the intensity of rainfall and where exactly it was falling.

One special sensor aboard the DC-8, called the High-Altitude MMIC Sounding Radiometer, provided a 3-D distribution of temperature and water vapor in the atmosphere. The sensor is ideal for hurricane studies since it can look through thick clouds and probe into the interior of the storms. It has also led to the development of a new microwave sounder for geostationary satellites, GeoSTAR, which will make it possible to monitor the interior of hurricanes continuously without having to wait for a satellite to pass overhead.

Throughout the field mission, a Web-based real time mission monitor, developed by Marshall Space Flight Center, allowed scientists to track the progress of the experiment from anywhere on the globe using a standard internet connection. 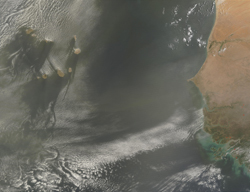 Image left: The skies over the Cape Verde Islands were filled with a brownish haze from dust blowing westward out of the African Sahara on June 3, 2002. This true-color image was captured by the Moderate Resolution Imaging Spectroradiometer on NASA's Terra spacecraft. The red dots appearing on the African landscape are wildfires. Click image to enlarge Credit: NASA

"Through the use of sophisticated technology, NAMMA provided an excellent opportunity to advance our understanding of tropical cyclones, as we gathered data on the critical elements at both the very small and large scales, from microscopic dust to air currents spanning hundreds of miles," said Jeff Halverson, one of four NAMMA mission scientists. "Much of the data gathered is still being analyzed, but the preliminary findings are very promising."

As researchers study the data collected, and input them into computer models, they will test hypotheses surrounding tropical cyclone formation in the Atlantic. NASA scientists will also compare NAMMA findings to data from previous missions that took place in the Caribbean and Gulf of Mexico. The results should help determine the role of factors universal to hurricane formation and those uniquely dependent on location, such as the Saharan Air Layer in the eastern Atlantic and tall mountains in Central America. Ultimately, research findings will improve the group of computer models that help meteorologists forecast hurricane strength and intensity.

Other scientists will be using NAMMA data for a variety of related research goals, including advancing the understanding of precipitation and cloud microphysics, examining the link between tropical cyclone development and West Africa rainfall, and assessing the accuracy of new satellites.