Did Dust Bust the 2006 Hurricane Season Forecasts?
A recent NASA study suggests that tiny dust particles may have foiled forecasts that the 2006 hurricane season would be another active one. 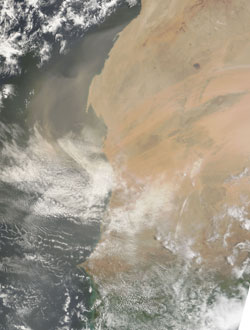 In June and July 2006, there were several significant dust storms over the Sahara Desert in Africa. As this dust traveled westward into the Atlantic, satellite data show that the particles blocked sunlight from reaching the ocean surface, causing ocean waters to cool. These cooler waters may have impeded some storminess since hurricanes rely on warm waters to form.

While several factors likely contributed to the sharp decrease in the number of storms, "this research is the first to show that dust does have a major effect on seasonal hurricane activity," said lead author William Lau, chief of the Laboratory for Atmospheres at NASA's Goddard Space Flight Center, Greenbelt, Md. "Dust concentrations may play as big a role as other atmospheric conditions, like El Niño, and offer some predictive value, so they should be closely monitored to improve hurricane forecasts."

Other researchers, however, say that atmospheric dust may have had relatively little influence on the 2006 hurricane season compared to the effects of underlying El Niño conditions.

Sea surface temperatures in 2006 across the prime hurricane-breeding regions of the Atlantic and Caribbean were found to be as much as 1 degree Celsius (1.8 degrees Fahrenheit) cooler than in 2005. Most striking was how quickly sea surface temperatures responded to variations in the amount of Saharan dust, Lau said. Following the most significant dust outbreak, which occurred in June and July, ocean waters cooled abruptly in just two weeks, suggesting that the dust had an almost immediate effect. 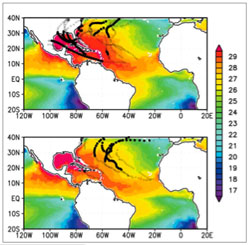 Image left: Cooler ocean waters in 2006 resulted in fewer summertime tropical storms and hurricanes in the Atlantic than in 2005. Average sea surface temperatures (degrees Celsius) for the July-September period are shown for 2005 (top) and 2006 (bottom). During 2005 there were nine distinct tropical storms (open circles) and hurricanes (black circles) over the balmy waters (greater than 28 degrees Celsius) of the western Atlantic, Caribbean and Gulf of Mexico. In the same period in 2006, only two tropical storms formed and none developed into hurricanes. Credit: NASA.

The dust worked to cool the ocean, but it also warmed the atmosphere by absorbing more of the sun's energy. This temperature difference resulted in a shift in the large-scale atmospheric circulation. As air rose over West Africa and the tropical Atlantic, it sank and became less moist over the western Atlantic and Caribbean. This pattern helped to increase surface winds that enhanced ocean evaporation and churned deeper, colder waters, causing the area of cool seas to expand.

Lau and co-author Kyu-Myong Kim of Goddard analyzed data on ocean temperatures, clouds, and water vapor from NASA's Tropical Rainfall Measuring Mission satellite and atmospheric dust levels from the Ozone Monitoring Instrument on NASA's Aura satellite. The study was published in the Feb. 27 issue of the American Geophysical Union's Eos.

The research also considered the role of El Niño by examining historical data on the intensity and development of tropical storms and hurricanes across the Atlantic basin. "We found that Saharan dust may have a stronger influence than El Niño on hurricane formation in the subtropical western Atlantic and Caribbean, but that El Niño has a greater impact in the tropical eastern Atlantic, where many storms are generated," said Lau.

El Niño is the periodic warming of the ocean waters in the central and eastern equatorial Pacific, which in turn can influence pressure and wind patterns across the tropical Atlantic.

"In 2006, it is quite possible that the Saharan dust may have amplified or even initiated pre-existing atmosphere-ocean conditions due to El Niño," said Lau. But other researchers say that while the amount of atmospheric dust in 2006 was greater than in 2005, the increase may have been too insignificant to be influential on the season. Instead, they believe the atmospheric effects from the underlying El Niño pattern in 2006 likely played a greater role.

Scott Braun, a hurricane specialist at NASA's Goddard Space Flight Center, said that in 2006, El Niño brought about broad changes to atmospheric conditions that likely had at least some influence on hurricane formation across much of the Atlantic.

Braun noted that during most of the hurricane season a large area of high pressure was located across the eastern Atlantic. This steered disturbances away from the warmest waters, so that they were less able to mature into tropical storms and hurricanes. At the same time, sinking motion – an atmospheric air mass that has cooled and is falling – combined with enhanced winds in the middle and upper atmosphere to minimize development in the Caribbean and western Atlantic and keep storms away from the U.S. These strong upper-level winds would contribute to a drastic change of winds with height, known as "shear" that can rip storms apart.

"This large-scale pattern has been associated with the effects of El Niño, suggesting it may have played a role in the seasonal activity," said Braun. "In fact, the last time the Atlantic produced so few storms was in 1997, when an El Niño pattern was also in place."

Braun and another hurricane researcher, Bowen Shen at NASA's Goddard Space Flight Center, agree that factors other than increased atmospheric dust may have contributed to cooler ocean waters in 2006.

"It is arguable that stronger surface winds over the tropical Atlantic may have cooled sea surface temperatures," said Shen. These winds likely helped to keep waters cooler by mixing the upper layers of the ocean and sweeping warmer waters westward. And although the waters were certainly cooler in 2006 than in 2005, they were still at or slightly above normal, suggesting other conditions helped to shape the season.

Current and future research efforts that examine how the ocean responds to surface winds and dust should help clarify their role in hurricane development. Although seasonal atmospheric patterns may increase the amount of dust across the Atlantic, the same atmospheric patterns may also be responsible for creating stronger winds at the ocean surface. By modeling the oceans, winds, and dust, researchers will generate a clearer picture of how these conditions vary from season to season.

"Although we continue to make significant strides in forecasting hurricanes and understanding their development, it is important to remember that the atmosphere is a chaotic system and numerous meteorological variables influence individual storms and activity throughout the season. NASA's constellation of several Earth-observing satellites, including Aura, is designed to provide coordinated measurements of these many variables for future research," said Lau.