The typhoon meaning "rabbit" in English, known as Typhoon Usagi, made landfall just north of the city of Miyazaki on Japan's Kyushu Island at 6 p.m. local time (Japan) Thursday, August 2.

Typhoon Usagi slammed southwestern Japan with wind gusts of up to 130 mph as it made landfall and plowed along Kyushu’s east coast. Reports noted that it disrupted airlines, railway and highway traffic. Usagi brought more than 12 inches of rain to some areas, creating local flooding. 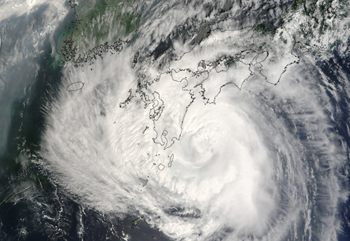 Click image to enlarge.
This image from the Moderate Resolution Imaging Spectroradiometer (MODIS) on NASA’s Terra satellite was captured on August 2, 2007, at 02:10 Universal Coordinated Time (11:10 a.m. local time in Japan). The northwest quadrant of Typhoon Usagi blankets Kyushu, Shikoku, and western Honshu with clouds. The outermost bands of clouds reach South Korea. The eye of the storm was about 55 kilometers (34 miles) off shore of southern Kyushu. Towering thunderstorms along the northern rim of the eye make it seem like the clouds are boiling. Usagi was the fifth named storm of 2007 in the western Pacific. The storm reached Category 4 status, with maximum sustained winds of 120 knots (222 kilometers per hour, 138 miles per hour), but had weakened to Category 3 status, with winds of 100 knots (185 kilometers per hour, 115 miles per hour) about two hours before this image was captured.)

The large image provided above has a spatial resolution (level of detail) of 250 meters per pixel. The MODIS Rapid Response Team provides this image in additional resolutions, including a KMZ file of Typhoon Usagi suitable for use with Google Earth.

Typhoon Usagi continues to gather strength in the West Pacific as it continues on a course for southern Japan.

Where is Usagi Now and Where is it Going?

A Look at the Rainfall in Usagi Over Time

The Tropical Rainfall Measuring Mission satellite (known as TRMM) was placed into its low-earth orbit back in November of 1997 with the primary mission of measuring rainfall from space; however, it has also served as a valuable platform for monitoring tropical cyclones, especially over remote parts of the open ocean. This series of remarkable images from TRMM captures the growth of Usagi in the Pacific.

Usagi started out as a tropical disturbance in the northwest Pacific about midway between Wake Island and the Northern Marianas. After drifting generally westward for a couple of days the system began to organize and was classified as a tropical depression on July 28, 2007 and was soon after named a tropical storm. 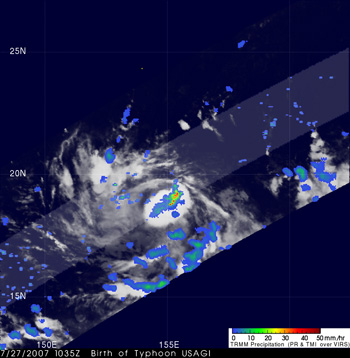 This first image from TRMM was taken at 10:35 Universal Time on July 27, about 24 hours before the system became a tropical depression. The image shows the horizontal distribution of rain intensity looking down on the storm. Rain rates in the center of the swath are from the TRMM Precipitation Radar (PR), while those in the outer portion are from the TRMM Microwave Imager (TMI). The rain rates are overlaid on infrared (IR) data from the TRMM Visible Infrared Scanner (VIRS). At this stage, the system appears as a relatively small cluster of storms. The circulation is very weak with no evidence of banding (curvature) in the rain field. 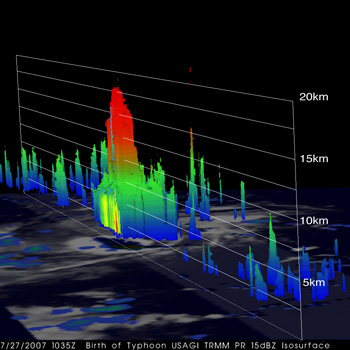 However, the next image, taken at the exact same time, shows a 3D perspective of the system courtesy of the TRMM PR and reveals the areas of heavier rain visible in the previous image are associated with deep convective towers (shown in red). These can be a sign of future development as they release heat into the system. 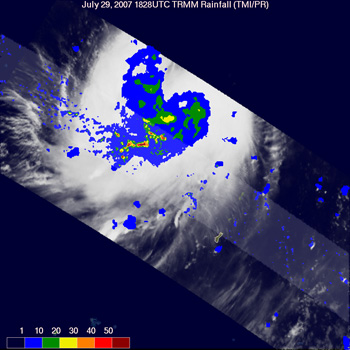 On July 29, Tropical Storm Usagi continued to develop as it propagated westward. At 18:00 UTC on July 29, Usagi was upgraded to a typhoon and began a more northwesterly track. 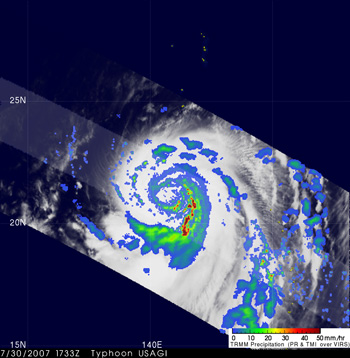 The next image was taken by TRMM about 24 hours later at 17:33 UTC on July 30. Usagi was still a Category 1 typhoon. In contrast to the first image, Usagi is now a much larger storm with a well-developed circulation as evidenced by the many spiraling rainbands (blue and green arcs indicating areas of light to moderate rain, respectively). Usagi has a rather large, ragged eye at this time (central blue and green ring), but the storm is still fairly asymmetrical with most of the rain southeast of the center. At the time of this image, maximum sustained winds were estimated to be 75 knots (81 mph) by the Joint Typhoon Warning Center. 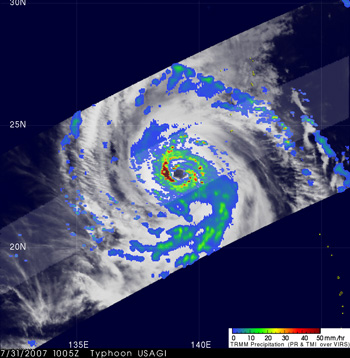 Soon after the last TRMM image was taken, Usagi was upgraded to a Category 2 cyclone. The next image was taken at 10:05 UTC July 31. TRMM reveals that Usagi has continued to strengthen and organize. The eye (dark center) is now smaller and less ragged than in the previous image. The storm is also more symmetric with concentric rain bands surrounding the center. There is also a large area of intense rain (dark red area) on the western side of the eye. The final image shows a 3D view of Usagi at the exact same time. Again, the areas of intense rain are associated with deep convective towers, indicating Usagi is likely to continue to intensify as they release heat into the storm's core. The ring of deep convective towers (red tops) farther out but nearly surrounding center of the storm could be the beginning of an outer eyewall. At the time of these final two images, Usagi's sustained winds were estimated at 90 knots (104 mph). Soon after, Usagi was upgraded to a Category 3 cyclone with sustained winds estimated at 105 knots (121 mph). TRMM is a joint mission between NASA and the Japanese space agency JAXA. Images produced by Hal Pierce (SSAI/NASA GSFC) and caption by Steve Lang (SSAI/NASA GSFC). 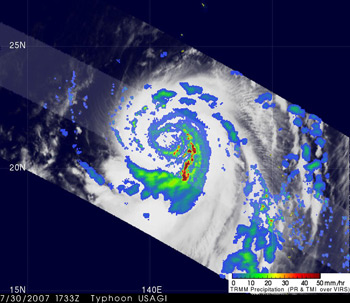 Click image to enlarge
Typhoon Usagi which means rabbit in Japanese is intensifying and moving toward Japan. Earlier this month a deadly typhoon called MAN-YI also hit Southern Japan. Typhoon USAGI is the 12th named tropical cyclone and the fourth typhoon in the West Pacific this year.

The image above shows a rainfall analysis using data collected by the Tropical Rainfall Measuring Mission (TRMM) satellite over the western Pacific Ocean on July 30, 2007 at 1733 UTC. It shows a rainfall analysis near USAGI when typhoon strength wind speeds were approaching category 2 strength of 83 knots (96 mph). The background image shows the horizontal pattern of rain intensities estimated from TRMM satellite data. Rain rates in the center swath are based on the TRMM Precipitation Radar (PR), and those in the outer swath on the TRMM Microwave Imager (TMI). The rain rates are overlaid on infrared (IR) data from the TRMM Visible Infrared Scanner (VIRS). Credit: Image and caption: Hal Pierce, SSAI/NASA


An Inside Look at Typhoon Usagi's Clouds

Click image to enlarge
This image of Typhoon Usagi was taken from NASA's CloudSat satellite on July 29 at approximately 11:46 p.m. Local Japan Time (14:46 UTC). The red and purple areas indicate large amounts of cloud water. The blue areas along the top of the clouds indicate cloud ice, while the wavy blue lines on the bottom center of the image indicate intense rainfall. Notice that the solid line along the bottom of the panel which is the ground, disappears in these areas of intense precipitation. It is likely that in the area the precipitation rate exceeds 30mm/hr (1.18 inches/hour) based on previous studies. Image credit: NASA/JPL/The Cooperative Institute for Research in the Atmosphere (CIRA), Colorado State University