Olga Fizzles in the Caribbean 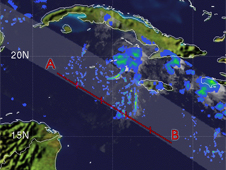 The latest NASA satellite image shows how Olga was falling apart and how rainfall does not completely circle Olga's center. It was created from data from the Tropical Rainfall Measuring Mission (TRMM) satellite on Dec. 13 at 6:50 a.m. EST (11:50 UTC). The TRMM image shows the horizontal pattern of rain intensity within the Olga. At that time, it had only light rainfall between 15 and 30 millimeters/hour (0.6 to 1.18 inches/hour) as seen in blue and green in this image.

That advisory was the final one for Olga, as the NHC reported that Tropical Depression Olga was becoming less defined and was forecast to be a remnant low later on Dec. 13. NHC Forecaster Lixion Avila noted "The low will likely become absorbed by an approaching cold front in 3 days or so over the extreme northwestern Caribbean Sea." 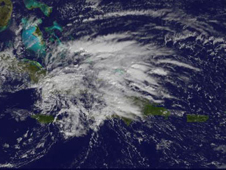 At 10:00 a.m. EST (1500 UTC) on Dec. 12, the center of Tropical Storm Olga's winds had dropped to a sustained 40 mph (65 km/hr). The stronger winds were mostly confined to rainbands northeast of the center of Olga's circulation.

At 10 a.m. EST, Olga was located near latitude 19.1 north and longitude 75.2 west or about 75 miles (120 km) south of Guantanamo, Cuba. She was moving westward near a speedy 23 mph (37 km/hr) and this motion is expected to continue. However, Olga could dissipate as a tropical cyclone later today. Further, with dry air and strong shear forecast over the northwestern Caribbean significant regeneration there is not expected.

This image of Olga was created from data from the Geostationary Operational Environmental Satellite (GOES-12), which is operated by the National Oceanic and Atmospheric Administration. It was created at 14:45 UTC at 9:45 a.m. EST by NASA's GOES Project, located at NASA's Goddard Space Flight Center, Greenbelt, Md.

The primary threat from Olga continues to be heavy rainfall and life-threatening flash floods and mud slides in Hispaniola. Some of these rains should spread over eastern Cuba today.

Although the Atlantic hurricane season ended Nov. 30, its not unusual to have a storm in December. Three named storms have formed after November 30 since 2003. Olga was the 15th named storm of the 2007 season. 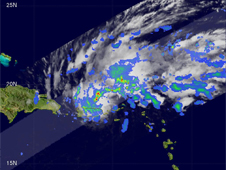 Click image for enlargement. Credit: Hal Pierce, Science Systems and Applications Incorporated / NASA Goddard The Atlantic Ocean hurricane season officially ended on Nov. 30, but Mother Nature has her own rules. Late on Dec. 10, Subtropical Storm Olga formed east of the island of Hispaniola, home of Haiti and the Dominican Republic.

Olga is moving toward the west near 15 mph (24 km/hr) and this general motion should continue for next day or so. Ground radar at San Juan, Puerto Rico suggests that the maximum sustained winds have decreased to near 40 mph (65 km/hr). The estimated minimum central pressure based on surface observations is 1004 millibars. The storm is expected to head west on a path toward Belize over the next 5 days.

The main threat from Olga remains heavy rain, flash flooding and mudslides. It is expected to produce rain accumulations of 2 to 4 inches over Puerto Rico with isolated maximum amounts of 6 inches. Rainfall amounts of 4 to 6 inches are possible over Hispaniola with possible isolated maximum totals of 10 inches.

The image above was created from data from the Tropical Rainfall Measuring Mission (TRMM) satellite on Dec. 10 at 10:59 EST (Dec. 11 3:59 UTC). The TRMM image shows the horizontal pattern of rain intensity within the Olga. The system was organized with moderate rainfall between 35 and 40 millimeters/hour (1.4 to 1.6 inches/hour) as seen in red in this image.

Olga was named a subtropical storm on Monday, Dec. 10 at 11 p.m. EST, when the National Hurricane Center (NHC) reported "a well-defined...though broad...surface circulation and organized convection not far from the center, centered near the Virgin Islands and Puerto Rico." The NHC noted that "due to the presence of an upper-level low just south of the Virgin Islands...it is being designated a subtropical cyclone."

For more information about how TRMM looks at rainfall, visit NASA's TRMM Web site. TRMM is a joint mission between NASA and the Japanese space agency JAXA.