Scientists are paying close attention to tropical cyclones around the world, and especially around the U.S. as we go further into hurricane season. At the end of last month, a tropical cyclone and monsoon rains combined to bring extensive flooding to southwestern Pakistan. Now, some activity is brewing near the U.S. in the eastern Pacific.

Over the weekend of July 7-8, 2007, there are two possible storms brewing in the eastern Pacific, which meteorologists will be watching for development early next week. One area of disturbed weather has developed about 725 miles south of Manzanillo, Mexico. A second area of disturbed weather has formed about 1250 miles southwest of the southern tip of Baja California. Conditions are favorable for some slow development during the next couple of days for both areas.

Meanwhile, the Atlantic will likely remain quiet for the weekend. A weak area of low pressure just east of Jacksonville, Fla., was producing disorganized showers and thunderstorms on 7/6, but upper level winds aren't favoring development. Another area of low pressure, 450 miles east of the southern Windward Islands has degenerated into a tropical wave. 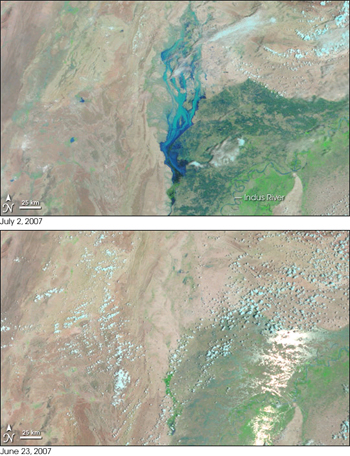 A dual disaster hit Pakistan in the final week of June 2007. On June 23, heavy rains and winds swept over much of the country, and three days later, on June 26, Cyclone Yemyin (03B) blew ashore in southern Pakistan. The two storms caused extensive flooding in the country’s southwest from the Arabian Sea coast to the border with Afghanistan. The Moderate Resolution Imaging Spectroradiometer (MODIS) captured this image of flooding in near the Indus River on July 2, 2007. The large image shows additional flooding along the coast.

In this type of false color image, made with infrared and visible light, water is dark blue or black. The lighter blue color in the north is either water-soaked land or mud-laden water. The desert landscape is tan-pink, while cropland near the Indus is green. Clouds are pale blue and white. The lower image, taken on June 23 before the storm moved in, shows normal conditions. The white streak near the right edge of the image is sunlight reflected off the wetlands around the Indus River.

In the area shown here, more than 100,000 people were displaced when 800 villages were submerged by floods, said Relief Web. As of July 4, the International Federation of Red Cross and Red Crescent Societies estimated that approximately 300 lives had been lost throughout Pakistan, and 550,000 people had been displaced.

You can download a 250-meter-resolution KMZ file of the flooding and comparison imagery from June 23, suitable for use with Google Earth.


Tropical Cyclone 03B or "No Name" Meets Its End 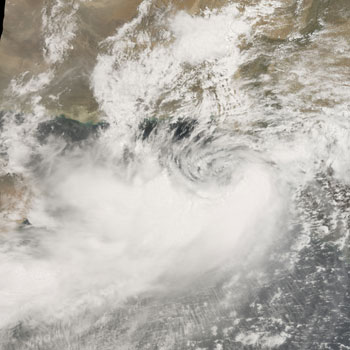 Cyclonic storms in the Arabian Sea are rare, but not unheard of. Two tropical cyclones in the space of a month, on the other hand, is quite rare indeed. Unlike its predecessor, Tropical Cyclone Gonu, Cyclone 03B originated on the opposite side of the Indian Peninsula in the Bay of Bengal.

By Wed. June 27, 2007, at 6:00 Zulu Time (2:00 a.m. EDT) however, the final warning was issued on Cyclone 03B, by the Joint Typhoon Warning Center. Tropical Cyclone 03B (No Name) was located at 26.2 north latitude and 62.6 east longitude or approximately 65 nautical miles west-northwest of Asni, Pakistan. Maximum sustained winds were 25 knots (29 mph), with gusts to 35 knots (40 mph). By that time, the cyclone had been over land for 15 hours and continued to weaken as it moved westward.

The image above was taken at 11:10 a.m. local time (06:10 UTC) on June 25, 2007, by the Moderate Resolution Imaging Spectroradiometer (MODIS) on NASA’s Terra satellite. At that time, Tropical Cyclone 03B was reforming in the Arabian Sea south of the Pakistan coast after having crossed over India.

The storm system has a discernable spiraling shape, but does not appear well-formed in this image. The storm has no distinct eye, suggesting that it is not particularly well organized. At the time, sustained winds were measured at 60 kilometers per hour (40 miles per hour) according to the University of Hawaii’s Tropical Storm Information Center.

The storm flooded India’s Andhra Pradesh province, resulting in 45 deaths, according to Weather Underground. It also caused flooding and wind damage in Karachi, Pakistan, where the death toll was around 200, according to BBC News. After crossing land, the storm reached the Arabian Sea and began to reform. As of June 26, forecasts were calling for the storm to gain some organization and power, skirt the Pakistani coast, and make landfall again somewhere near the border between Iran and Pakistan. Storm surge from Cyclone 03B was predicted to be moderately high, even though the storm is not strong, since the offshore waters are shallow, similar to the northern Gulf of Mexico. Because these kinds of storms are rare, coastal communities are particularly vulnerable to storm surge damage. Credit: NASA /Jesse Allen, MODIS Rapid Response team 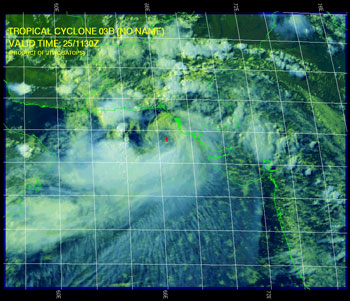 The cyclone identified as "03B" or the "No Name" cyclone crossed over central India over the weekend of June 23, and as of Monday, June 25, 2007, is churning in the Arabian Sea.

As of 12:00 Zulu Time (8:00 a.m. EDT) 03B was located near 23.5 degrees north latitude and 66.4 east longitude, approximately 85 nautical miles south-southwest of Karachi, Pakistan. It has tracked northwestward at 10 knots (11 mph) over the past 6 hours and continues to head in that general direction. Observations in Karachi, Pakistan at that time recorded sustained winds of 26 knots (29 mph) with a 3 millibar drop in pressure in the last 24 hours, indicating the approaching cyclone.

Landfall is also now expected to occur further to the east over western Pakistan. Forecasters believe that the tropical cyclone will intensify before making landfall, and are forecasting maximum sustained winds could reach 55 knots (63 mph).

Once Cyclone 03B makes landfall, it is expected to weaken quickly over the rugged terrain, and will likely dissipate in 36 hours. Forecasters note that the maximum significant wave heights are currently near 14 feet in the Arabian Sea.


'No Name' Cyclone Affecting India; No Storms Near U.S.

As of Friday, June 22, 2007, we're three weeks into the Atlantic and Eastern Pacific Hurricane Seasons, but all appears quiet in both places, at least for the weekend, according to the National Hurricane Center.

Meanwhile, half a world away, the Indian sub-continent is dealing with a tropical cyclone simply identified as "03B," or the "No Name" cyclone. 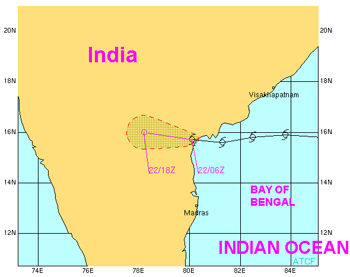 Click image to enlarge.
The current warning position is based on satellite imagery and surface observations from stations along the east coast of India. The system has moved ashore and is forecast to dissipate. The remnants are forecast to track westward across central India and may eventually track into the Arabian Sea after several days, allowing the possibility for some regeneration.