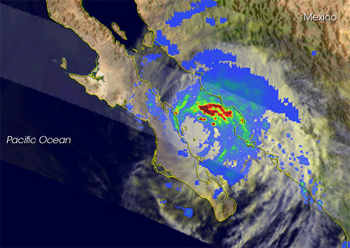 Click image for enlargement.
Although not a very powerful storm, Hurricane Henriette was responsible for seven fatalities along Mexico’s Pacific coast as of September 6, 2007, said news reports. Henriette struck hardest in the resort town of Acapulco. Though the storm never passed closer than 70 miles to the town, heavy rains along the coast saturated the ground, leading to mudslides. These slides were the leading cause of fatalities.

This image shows Hurricane Henriette as a Category One hurricane as seen by the Tropical Rainfall Measuring Mission (TRMM) satellite at 8:50 a.m. local time (14:50 UTC) on September 5. At that time, the storm was moving north-northwest over the Gulf of California after it had made its initial landfall on the Baja Peninsula. The image shows the horizontal pattern of rain intensity within the storm, with the heaviest rain in red and the lightest rain in blue. A break in the circular rainfall field in the southwest corner of the storm reveals a large, ragged eye. The large eye only partially surrounded by rain is a hallmark of a system that is decaying or has been weakened. In this case, Henriette was likely breaking up after its interaction with land. Most of the rain is north and east of the center with bands of heavy rain located just offshore of mainland Mexico (dark red areas). Henriette was expected to dump several inches of rain over mainland Mexico, and possibly bring some rain to the southwestern regions of the United States.

The TRMM satellite was placed into service in November 1997. From its low-earth orbit, TRMM provides valuable images and information on storm systems around the tropics using a combination of passive microwave and active radar sensors, including the first precipitation radar in space. In this image, the rain rates in the center of the swath are from the TRMM Precipitation Radar, and those in the outer swath come from the TRMM Microwave Imager. The rain rates are overlaid on infrared data from the TRMM Visible Infrared Scanner. TRMM is a joint mission between NASA and the Japanese space agency, JAXA. 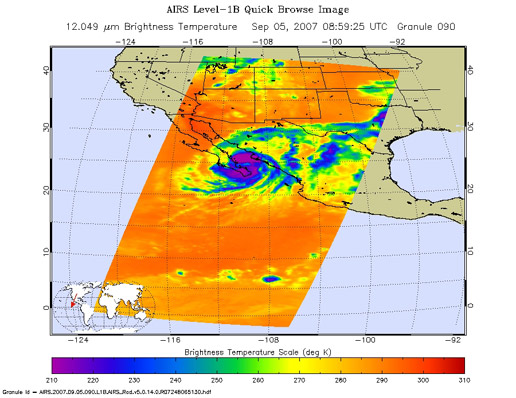 Hurricane Henriette sloshes into the Gulf of California's warm waters in this Sept. 5 image from the Atmospheric Infrared Sounder on NASA's Aqua satellite. The Category One storm is forecast to make landfall along the coast of mainland Mexico later today, and could bring some rain to the U.S. Southwest. 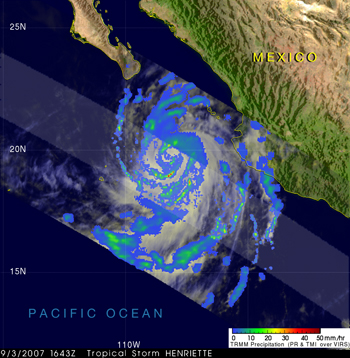 Click image for higher resolution.
Although not a very powerful storm, Henriette is still responsible for seven fatalities along Mexico's Pacific coast, mainly as a result of rain-induced mudslides. The hardest hit area was the coastal resort town of Acapulco.

The 11th tropical depression of the season in the East Pacific (TD #11E) formed about 165 miles off of the southern Pacific coast of Mexico on the afternoon (local time) of the 30th of August 2007. The system took a northwesterly track parallel to the coastline and slowly strengthened. By the next day, it had become a weak tropical storm and was given the name Henriette. Although the center remained about 70 miles off the coast as it was passing Acapulco, Henriette dumped heavy rains along the coast that lead to mudslides in the area. Over the next few days, Henriette changed little in strength and remained a tropical storm as it stayed off shore and parallel to the Mexican coastline. This image shows Tropical Storm Henriette as it was moving northwestward in the East Pacific before it became a hurricane. The image was taken by the Tropical Rainfall Measuring Mission (or TRMM) satellite at 16:43 UTC (9:43 am PDT) on the 3rd of September 2007 and shows the horizontal pattern of rain intensity within the storm. Rain rates in the center of the swath are from the TRMM PR, and those in the outer swath come from the TRMM Microwave Imager (TMI). The rain rates are overlaid on infrared (IR) data from the TRMM Visible Infrared Scanner (VIRS). Although the storm is not very strong, several rain bands of light to moderate intensity (blue and green areas, respectively) spiral around the center and extend for several hundred miles. At the time of this image, maximum sustained winds were estimated at 60 knots (69 mph) by the National Hurricane Center.

Henriette strengthened into a minimal Category 1 hurricane on August 4 before making landfall later that day on the southern tip of Baja California with sustained winds of 75 mph. Damage was reported as minimal. Henriette made a second landfall on August 5, on the mainland of Mexico again as a minimal Category 1 storm and is expected to dump several inches of rain over the area. 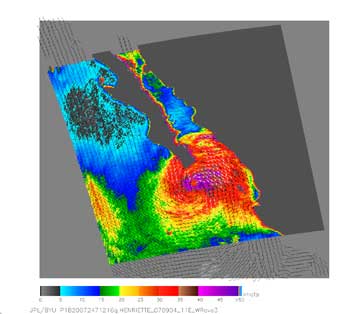 Click image to enlarge
This satellite image from NASA's QuikSCAT satellite was taken on September 4 at 12:57 UTC (8:57 a.m. EDT) and depicts the wind speeds in Hurricane Henriette. The center of Henriette is indicated by the purple color. This image depicts wind speed in color and wind direction with small barbs. White barbs point to areas of heavy rain. The highest wind speeds, around the eye, are shown in purple. Winds in the areas shown in red are already affecting the southern areas of Baja California.

According to the National Hurricane Center, at 11:00 a.m. PDT (1800z) the center of Hurricane Henriette was located near latitude 22.6 north...longitude 109.5 west or about 35 miles (55 km) east-southeast of the southern tip of Baja California.

Henriette is moving toward the north-northwest near 10 mph (17km/hr) and this general motion is expected during the next 24 hours. On this track the center of Henriette is expected to move over or very near the southern tip of Baja California in the afternoon. Henriette's rainbands were affecting the southern Baja peninsula in the late morning.

Maximum sustained winds have strengthened to 85 mph with higher gusts. Henriette is a category one hurricane on the Saffir-Simpson Scale. Little change in strength is expected prior to landfall. Estimated minimum central pressure is 972 millibars. + More on Henriette 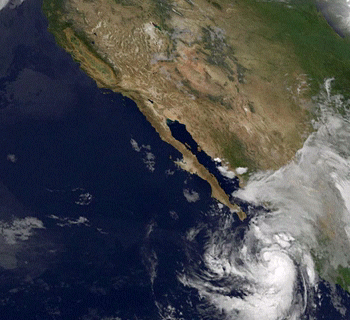 Click image for animation.
Hurricane Henriette has been dwelling off the western Mexican coast since Friday, August 31 and is now poised to make landfall in Baja California with 75 mph sustained winds and rainfall up to one foot in isolated areas.

At 5:00 a.m. PDT (1200z) on Tuesday, Sept. 4, as a Category One hurricane on the Saffir-Simpson scale, the center of Hurricane Henriette was near latitude 21.9 north and longitude 109.3 west or about 80 miles (125 km) south-southeast of the southern tip of Baja California. Henriette may strengthen a little before she makes landfall during the afternoon hours on Sept. 4.

This is an animation of satellite imagery showing Hurricane Henriette's trek along the western Mexican coast, as she headed to Baja California. This movie was created from data from the Geostationary Operational Environmental Satellite (GOES-11), which is operated by the National Oceanic and Atmospheric Administration. The movie shows Henriette's movements from September 2 through the early morning hours of September 4. It was created by NASA's GOES Project, located at NASA's Goddard Space Flight Center, Greenbelt, Md.

Henriette's maximum sustained winds on Sept. 4 at 5:00 a.m. PDT were near 75 mph with higher gusts. She was moving north-northwest near 10 mph, and is expected to speed up in the next 24 hours. Estimated minimum central pressure is 978 millibars.

Henriette is expected to bring storm surge flooding above normal tide levels of 2 to 3 feet, with large and battering waves. Rainfalls expected from Henriette will be between 3 and 5 inches along the west Mexican coast, with isolated areas to 10 inches. Over the southern areas of Baja California, larger rainfall amounts are possible, from 4 to 8 inches, and in some spots up to 12 inches. That means that flash-flooding and mudslides are possible.

Elsewhere in the eastern Pacific, the once Tropical Storm Gil fizzled on Sunday, September 3 into a remnant low pressure area. 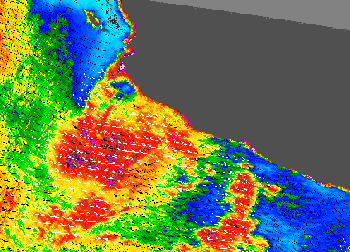 Click image for enlargement.
This QuikSCAT image captured Hurricane Henriette's winds on Sunday, Sept. 2 at 1:00 UTC (6:00 p.m. PDT) as it was moving up the western Mexican coast.

Tropical Storms Gil and Henriette Chase Each Other in the Eastern Pacific; Atlantic Under Watch

It may be a holiday weekend for most people, but not for tropical storms in the eastern Pacific, where there are two. Tropical Storm Gil has moved west of Baja California into open waters, while Tropical Storm Henriette has formed off the southwestern coast of Mexico.

Watching an Atlantic Area for Development

Meanwhile, in the Atlantic Ocean, hurricane forecasters on August 31 are watching a tropical wave and associated area of low pressure about 250 miles east of the Windward Islands. That area may develop into a tropical depression. If it does, watches and warnings may be posted for parts of the Windward Islands. Regardless, heavy rains and gusty winds will affect the islands on Friday August 31, and Saturday, September 1. 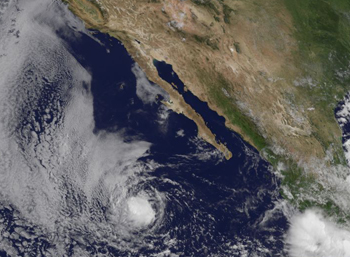 Click image for enlargement.
This image shows both Tropical Storms Gil in the open waters of the Eastern Pacific, (bottom center) and Henriette (lower right) hugging the Mexican coastline. The image was created with data from Geostationary Operational Environmental Satellite (GOES-11), which is operated by the National Oceanic and Atmospheric Administration. The image was captured on August 31, 12:15 p.m. EDT (16:15 UTC) and created by NASA's GOES Project, located at NASA's Goddard Space Flight Center, Greenbelt, Md.

Tropical Storm Gil poses no immediate threat to land masses, as he moves in open water over the Labor Day weekend. On Friday, August 31, 2007, at 8:00 a.m. PDT, Gil was located near 19.1 north latitude and 117.4 west longitude.

Gil was moving west at 9 knots (10 mph) and had maximum sustained winds of 35 knots (40 mph) with higher gusts. The minimum central pressure was 1000 millibars. Gil is expected to weaken to a tropical depression by Wednesday, September 5.

On Friday, August 31, 2007 at 8:00 a.m. PDT (11:00 a.m. EDT), radar from Acapulco, Mexico and microwave satellite data indicated that Henriette was gradually becoming better organized while visible satellite images showed a very large area of cloudiness and thunderstorms. Henriette was located near 15.7 degrees north latitude and 100.1 west longitude, about 85 miles south of Acapulco, Mexico. Her maximum sustained winds were at 40 mph with higher gusts, and she is expected to strengthen gradually. Minimum central pressure is at 1001 millibars.

Henriette is moving toward the west-northwest at 10 mph (17 km/hour). On this track the core of Henriette will be hugging the western Mexican coast, and is forecast to track near the Baja California by Tuesday, Sept. 4.