Andrea Fades Into a Remnant Low-Pressure System
The swirling mass of clouds and rain showers associated with weakening subtropical depression Andrea continued to dissolve off the southeast U.S. coast on Thurs., May 10. By evening, the storm no longer met criteria for classification as a subtropical cyclone, prompting the National Hurricane Center to issue its final advisory.

At 11 p.m. EDT on Thurs., May 10 (0300 UTC Fri., May 11), the center of Andrea was located near 29.3 degrees north latitude and 79.8 degrees west longitude; about 100 miles east-southeast of St. Augustine, Florida. Maximum sustained winds were near 35 mph (30 knots) with some higher gusts. Minimum central air pressure had risen to 29.65 inches (1004 millibars). Andrea's remnants are expected to slowly drift south, with a gradual turn toward the southeast by late Fri., May 11. On this track, the low-pressure system will remain just offshore from the northeast Florida coast. Full dissipation is expected by early Sun., May 13. Storm summary: Mike Bettwy, RSIS/NASA Goddard Space Flight Center. 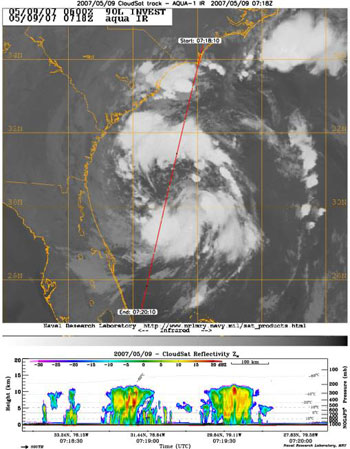 Click image to enlarge.
CloudSat's Cloud Profiling Radar captured a profile across subtropical storm Andrea on Wed., May 9, off the Georgia-Florida coastline. The top image shows an infrared view of Andrea from the Moderate Resolution Imaging Spectroradiometer instrument on NASA's Aqua satellite, with CloudSat's ground track shown as a red line. The bottom image is the vertical cross section of radar reflectivity along this path. The colors indicate the intensity of the reflected radar energy. Image credit: NASA/JPL/Colorado State University/Naval Research Laboratory-Monterey.


Andrea Downgraded to a Subtropical Depression; Lingers Off Florida Coast

After forming on Wed., May 9, a few weeks before the official start of the Atlantic basin hurricane season, subtropical storm Andrea was weakening rapidly on Thurs., May 10, and downgraded to a subtropical depression. All tropical storm watches along the southeast U.S. coast were dropped.

As aircraft flew over Andrea on Thursday morning, May 10, the storm's few remaining intense thunderstorms were found removed from the center of circulation. Further weakening is anticipated as the storm moves into a drier, more stable environment and encounters greater wind shear (changing wind speed and direction with height). Forecasters expect Andrea to dissolve into a remnant low by Fri., May 11, and then begin a turn toward the east on Sat., May 12.

At 11:00 a.m. EDT (1500 UTC) on Thurs., May 10, the center of subtropical depression Andrea was located near 29.9 degrees north latitude and 79.9 degrees west longitude; about 100 miles east-southeast of Jacksonville, Florida. Maximum sustained winds had decreased to near 35 mph (30 knots) with some higher gusts. Minimum central air pressure was steady at 29.62 inches (1003 millibars).

Storm movement was toward to the south at just 2 mph (2 knots). This motion is expected to continue over the next 24 hours, keeping Andrea offshore from the northeast Florida coast through at least early Fri., May 11. Rainfall amounts of one-half to one inch can be expected along the coastal areas of Georgia and Florida, regions currently suffering from severe drought. 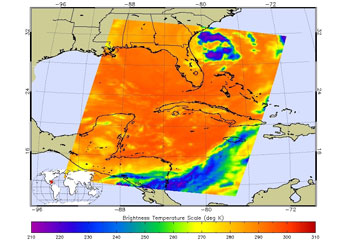 This infrared satellite image shows subtropical storm Andrea off the southeast U.S. coast. Taken from the Atmospheric Infrared Sounder (AIRS) on NASA's Aqua satellite at 3:17 a.m. EDT (717 UTC) on Wed., May 9, it depicts the temperature of the cloud tops or the surface of the Earth in cloud- free regions. The lowest temperatures (in purple) are associated with high, cold cloud tops that make up the top of the storm. The infrared signal does not penetrate through clouds. Where there are no clouds the AIRS instrument reads the infrared signal from the surface of the Earth, revealing warmer temperatures (red). 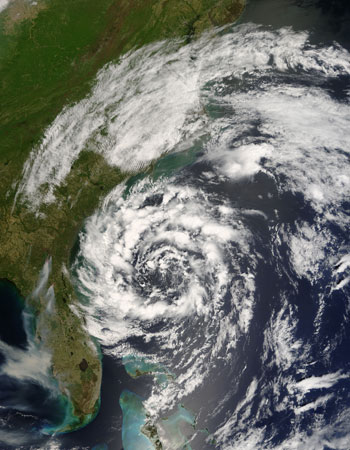 The swirling clouds of an intense low-pressure system sat off the southeast coast of the U.S. on Tues., May 8, when the Moderate Resolution Imaging Spectroradiometer (MODIS) on NASA’s Terra satellite captured this image (below). By the following morning, the system had developed into a subtropical storm. While Andrea has the circular shape of a tropical cyclone, it lacks the tight organization seen in more powerful storms. Winds associated with Andrea have worsened wildfires (red boxes) in Georgia and Florida. Image credit: NASA Goddard Space Flight Center. Caption credit: Mike Bettwy, RSIS/NASA Goddard Space Flight Center.

The Atlantic hurricane season's first subtropical cyclone - Andrea - has formed about 150 miles northeast of Daytona Beach, Florida, but does not pose an immediate threat to the U.S. east coast.

At 11:00 a.m. EDT (1500 UTC) on Wed., May 9, the center of Andrea was located near 30.8 degrees north latitude and 79.3 degrees west longitude, and was inching toward the west at 3 mph (2.6 knots). This motion is expected to continue through Thurs., May 10, keeping the heaviest rainfall offshore. Maximum sustained winds were near 45 mph (39 knots), with higher gusts. Little change in strength is forecast during the next 24 hours.

Air Force reconnaissance aircraft flew over the storm early Wed., May 9 and reported a minimum air pressure of 29.62 inches (1003 millibars). Aircraft observations also confirmed that thunderstorm activity has become organized closer to the storm center. Although this suggests strengthening, Andrea remains embedded in a broader area of low pressure and will be traveling over cooler ocean waters, so additional intensification is not expected.

Andrea is also not forecast to make a U.S. landfall, but the National Hurricane Center has issued a tropical storm watch from Altamaha Sound, Georgia, to Flagler Beach, Florida, as tropical storm force winds may affect the region within the next 36 hours. 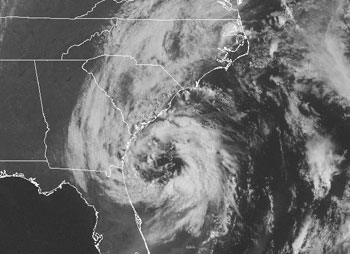 This visible satellite image of Andrea was taken by the Geostationary Operational Environmental Satellites (GOES) on Wed., May 9, at 10:15 a.m. EDT (1415 UTC). It shows the large, cyclonic mass of clouds associated with Andrea off the Georgia and Florida coastline. The deepest clouds (bumpy white) appear to be to the north and east of storm center (black, cloud free-region). Image credit: NOAA. Caption credit: Mike Bettwy, RSIS/Goddard Space Flight Center.