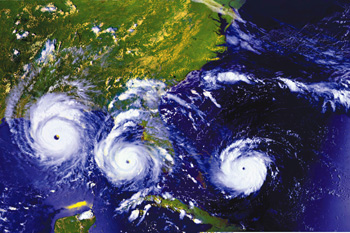 Fifteen years ago, in the early morning hours of August 24, 1992, Hurricane Andrew made landfall in south Florida and became one of the costliest hurricanes in U.S. history.

Andrew caused more than 30 billion dollars in damages, mostly in Florida, made neighborhoods unrecognizable and caused chaos and panic in south Florida. The National Hurricane Center reported 25,524 homes destroyed, and 101,241 homes damaged. The town of Homestead was devastated. Reports indicated 300,000 were homeless, more than half of one billion dollars in damages were done to boats in southeast Florida, and an artificial reef system was damaged extensively.

When Andrew came ashore in south Florida, during the very early morning hours of August 24, the National Hurricane Center, located at that time in Coral Gables, Florida, just south of Miami, reported wind gusts to 170 mph and higher in the southern Dade County suburbs before their own radar was blown off the roof of their building.

This is an image with three views of Hurricane Andrew on August 23, 24 and 25 1992 as the hurricane moves East to West on its track over south Florida and making landfall in a sparsely populated coastal area of Louisiana around 8 a.m. CDT on August 26, 1992.

This time-series of images was created with data from Geostationary Operational Environmental Satellite (GOES-7), which is operated by the National Oceanic and Atmospheric Administration. NASA's GOES Project, that creates GOES images and animations, is located at NASA's Goddard Space Flight Center, Greenbelt, Md.

For more images of Hurricane Andrew, please visit on the Web: