NASA Looks at Sea Level Rise, Hurricane Risks to New York City
New York City has been an area of concern during hurricane season for many years because of the large population and logistics. More than 8 million people live in the city, and it has hundreds of miles of coastline that are vulnerable to hurricane threats. Using computer climate models, scientists at NASA have looked at rising sea levels and hurricane storm surge and will report on them at a science meeting this week. 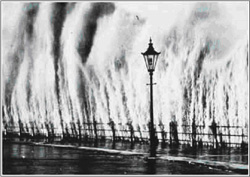 Cynthia Rosenzweig and Vivien Gornitz are scientists on a team at NASA's Goddard Institute for Space Studies (GISS) and Columbia University, New York City, investigating future climate change impacts in the metropolitan area. Gornitz and other NASA scientists have been working with the New York City Department of Environmental Protection (DEP) since 2004, by using computer models to simulate future climates and sea level rise. Recently, computer modeling studies have provided a more detailed picture of sea level rise around New York by the 2050's.

During most of the twentieth century, sea levels around the world have been steadily rising by 1.7 to 1.8 mm (~0.07 in) per year, increasing to nearly 3 mm (0.12 in) per year within just the last decade. Most of this rise in sea level comes from warming of the world’s oceans and melting of mountain glaciers, which have receded dramatically in many places since the early twentieth century. The 2001 report of the Intergovernmental Panel on Climate Change found that a global warming of 1.4° to 5.8° C (2.5° -10.4° F) could lead to a sea level rise of 0.09-0.88 meters (4 inches to 2.9 feet) by 2100.

A study conducted by Columbia University scientists for the U.S. Global Change Research Program in 2001 looked at several impacts of climate change on the New York metropolitan area, including sea level rise. The researchers projected a rise in sea level of 11.8 to 37.5 inches in New York City and 9.5 to 42.5 inches in the metropolitan region by the 2080s. 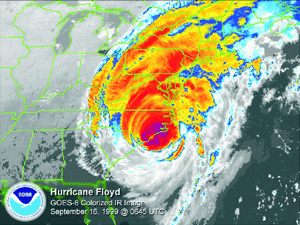 "With sea level at these higher levels, flooding by major storms would inundate many low-lying neighborhoods and shut down the entire metropolitan transportation system with much greater frequency," said Gornitz.

With sea level rise, New York City faces an increased risk of hurricane storm surge. Storm surge is an above normal rise in sea level accompanying a hurricane. Hurricanes are categorized on the Saffir-Simpson scale, from 1 to 5, with 5 being the strongest and most destructive. The scale is used to give an estimate of the potential property damage and flooding expected along the coast from a hurricane landfall. Wind speed is the determining factor in the scale, as storm surge values are highly dependent on the slope of the continental shelf and the shape of the coastline, in the landfall region.

A recent study by Rosenzweig and Gornitz in 2005 and 2006 using the GISS Atmosphere-Ocean Model global climate model for the Intergovernmental Panel on Climate Change projects a sea level rise of 15 to 19 inches by the 2050s in New York City. Adding as little as 1.5 feet of sea level rise by the 2050s to the surge for a category 3 hurricane on a worst-case track would cause extensive flooding in many parts of the city. Areas potentially under water include the Rockaways, Coney Island, much of southern Brooklyn and Queens, portions of Long Island City, Astoria, Flushing Meadows-Corona Park, Queens, lower Manhattan, and eastern Staten Island from Great Kills Harbor north to the Verrazano Bridge. Gornitz will present these findings at the annual meeting of the Geological Society of America in Philadelphia during the week of Oct. 23.

To understand what hurricane storm surges would do to the city, surge levels for hurricanes of categories 1 through 4 were calculated by the U.S. Army Corps of Engineers for the 1995 Metro New York Hurricane Transportation Study using NOAA’s SLOSH computer model. SLOSH (Sea, Lake and Overland Surges from Hurricanes) is a computerized model run by the National Hurricane Center to estimate storm surge heights resulting from historical, hypothetical, or predicted hurricanes by taking into account pressure; size, forward speed, track and hurricane winds. 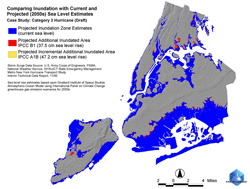 According to the 1995 study, a category three hurricane on a worst-case track could create a surge of up to 25 feet at JFK Airport, 21 feet at the Lincoln Tunnel entrance, 24 feet at the Battery, and 16 feet at La Guardia Airport. These figures do not include the effects of tides nor the additional heights of waves on top of the surge. Some studies suggest that hurricane strengths may intensify in most parts of the world as oceans become warmer. However, how much more frequently they will occur is still highly uncertain.

Hurricanes have hit New York City in the past. The strongest hurricane was a category four storm at its peak in the Caribbean, which made landfall at Jamaica Bay on Sept. 3, 1821 with a 13-foot storm surge. It caused widespread flooding in lower Manhattan. The “Long Island Express” or “Great Hurricane of 1938," a category three, tracked across central Long Island and ripped into southern New England on Sept. 21, 1938, killing nearly 700 people. The storm pushed a 25-35 foot high wall of water ahead of it, sweeping away protective barrier dunes and buildings.

The 1995 Transportation study was done to assess the vulnerability of the city's transportation system to hurricane surges. The 2001 Columbia study was one of the regional studies for the U.S. National Assessment of Climate Variability and Change; the recent study for the NYC DEP was to evaluate potential climate change impacts, including sea level rise, on the agency's mandated activities and infrastructure.

"This entire work is solutions oriented," said Rosenzweig. "It's about helping NYC DEP and other New York City agencies make better preparations for climate extremes of today, and changing extremes of the future. The report will help us determine how can we do better job now, as well as in the future."