The 2006 Hurricane Season Was Near Normal
After the record setting season of 2005 with 27 named tropical cyclones, many meteorologists and hurricane specialists were forecasting another above average hurricane season for 2006, but it didn't happen. NASA scientists have learned several reasons why. 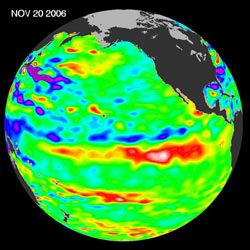 Although hurricane cycles still remain somewhat of a mystery that scientists are trying to solve, the general ingredients of what causes a hurricane to form are relatively well known. You need the winds to behave correctly, sea surface temperatures of at least 82 degrees Fahrenheit, and no interference from African dust, among other things.

In 2006, there were several factors that reduced the number of Atlantic Ocean storms from forming compared to 2005, while the eastern Pacific still saw 25 storms develop in 2006. In 2006, the Atlantic factors included lower sea-surface temperatures, the switch from weak La Nina to weak El Niño conditions and changes in the large-scale steering flow of winds associated with the Bermuda High (a semi-permanent high pressure system near Bermuda in the Atlantic that moves storms around it in a clockwise motion).

Persistent low-level easterly winds may have acted to keep the Atlantic Ocean sea surface temperatures lower through mixing of the upper ocean. When winds blow constantly, they push the warmer waters away, allowing cooler, deeper waters to come to the surface, keeping the ocean's surface cooler.

This past year, the Bermuda High steered systems away from the U.S. by steering them northward into the cooler waters of the Central Atlantic Ocean instead of into the warmer waters of the Caribbean Sea and the Gulf of Mexico as it did to storms in 2004 and 2005.

While dust activity from Africa was somewhat greater than in 2005, it probably played a much smaller role than these other factors. 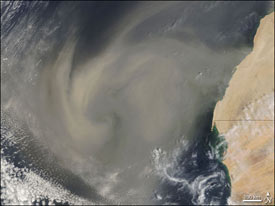 TRMM observed surface winds were persistently strong over the tropical Atlantic in 2006 while in 2005 they were somewhat weaker and more variable. The stronger winds in 2006 likely helped to keep temperatures cooler by mixing the upper layer of the ocean." The persistent winds were a key in keeping the Atlantic waters cooler than they were in 2005. As the winds kept blowing, they swept the warmer water west, and it was replaced by cooler waters from below the surface. Hurricanes need warm waters of at least 82 degrees Fahrenheit to form and strengthen. The winds prevented those warmer conditions from happening. In addition, Braun noted that those winds may have also been indicative of strong vertical winds called "shear" that rip storms apart.

The Bermuda High Was Different

The Bermuda High is a fairly stationary high-pressure system that sits near Bermuda in the western Atlantic Ocean. Surface high pressure develops when air is being forced down from above. That prevents the formation of storms and usually brings sunshine to an area that sits underneath it. However, the "Bermuda High" is always strong enough to act as a guide for the path hurricanes take when they move from the eastern Atlantic and head west toward the Caribbean and the U.S. and storms go around it in a clock-wise direction.

The position and the size of the Bermuda High is a key to where storms will go. In 2004 and 2005 the Bermuda High was situated more to west-southwest, so it steered systems west into the Caribbean and Gulf of Mexico's warmer waters. The warmer waters fueled the storms and strengthened many storms including Katrina, Rita and Wilma in 2005. This year, 2006, the Bermuda High was smaller and shifted to the eastern Atlantic, so it turned storms like Florence, Gordon, Helene and Isaac north into cooler waters of the central Atlantic, and directed them eastward into colder waters in the North Atlantic Ocean. 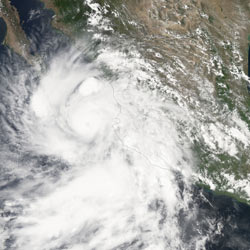 Image right: This photo-like image of Hurricane John was acquired by the Moderate Resolution Imaging Spectroradiometer (MODIS) on the Aqua satellite on August 31 2006, at 2:10 p.m. local time (20:10 UTC), when the storm's maximum sustained winds were around 105 miles per hour. At the time of this image, John's center was still offshore, but it soon made landfall on the southern tip of Mexico's Baja Peninsula. By September 4, the storm's maximum sustained winds had slowed to about 30 mph, well below the threshold for a tropical storm, as it slowly moved northwestward up the spine of the narrow Baja Peninsula. Image Credit: NASA/MODIS Rapid Response Team -- Image Caption: NASA/RSIS, Mike Bettwy

The current El Niño started developing in July, 2006. National Oceanic and Atmospheric Administration (NOAA) scientists said that this hurricane season's activity was lower than expected due to the rapid development of El Niño—a periodic warming of the ocean waters in the central and eastern equatorial Pacific, which influences pressure and wind patterns across the tropical Atlantic.

NOAA scientists noted that the El Niño produced a sinking motion in the middle and upper atmosphere and increased wind shear in the Caribbean. Those conditions minimized thunderstorm activity from the western coast of Africa across the Atlantic to the Caribbean, and suppressed tropical storm formation. They also believe that a strong low pressure system with enhanced westerly winds in the jet stream across the eastern U.S. helped to steer hurricanes out to sea.

Oceanographer Bill Patzert, of NASA's Jet Propulsion Laboratory, Pasadena, Calif. said "Forecasting the hurricane season in the spring is a high-risk business. This is because much can happen during the summer. Over the summer of 2006, a late-developing, modest El Niño arrived to shift upper level winds. Over the past few decades these forecasts have really improved, but there is still much we don't understand about these great storms. Looking to the future, NASA and NOAA scientists are on the case and, I'm confident that more reliable forecasts are in our near future."

African dust was found to "contaminate" several fledgling storm systems emerging off western Africa, according to Jeffrey Halverson, research meteorologist at the University of Baltimore County, Baltimore. Halverson participated in the NASA African Monsoon Multidisciplinary Analyses (NAMMA) hurricane research mission in the Cape Verde Islands off Africa's west coast this past summer. During the mission scientists from NASA, the National Oceanic and Atmospheric Administration and universities looked at how African dust affects storms.

Data from NASA's Moderate Imaging Spectroradiometer (MODIS) that flies aboard NASA's Terra and Aqua satellites revealed that both 2006 and 2005 had active dust storm seasons. Although 2006 was somewhat more active, and the dust played more of a role in whether or not individual storms were able to intensify, rather than limiting the overall number of storms that formed during the entire season.

The dust plumes contain very dry air, and also had high wind shear (winds that blow storms apart). Both of these factors knock the proverbial wind out of a storm's sails. Halverson said that out of the 12 or so seedling storms coming off the African west coast several had a veil of dust associated with them, which hindered their development.

The African dust storms happen because there's a big temperature difference over the continent, between the tropical, moist, vegetated areas in the south and the very hot, dry desert in the north. That actually helps to create some of these dust storms which can be the size of the continental U.S. and as much as 3 miles high into the atmosphere.

More Storms Made Landfall in Mexico in 2006

Although the Atlantic Ocean had a near normal hurricane season in 2006, the eastern Pacific had a greater number of named storms than occurred in 2005, and more of them made landfall in Mexico.

Braun said that the steering currents in the eastern Pacific were responsible for bringing several storms into Mexico in 2006. "Normally in any given year, there is some percentage of storms that turn northward into Mexico," he said. "In 2005 there were 17 storms in the Eastern Pacific, while in 2006 there were 25 storms, so there was a greater chance for more storms to steer into Mexico this year."

Carlotta, John and Paul were three of the Eastern Pacific storms that affected Mexico in the 2006 season. Carlotta was a category 1 hurricane on the Saffir-Simpson Hurricane Scale. She brought modest coastal rains but otherwise did not affect land. Hurricane John struck southern Baja California as a category 2 hurricane and was responsible for five deaths.

Hurricane Paul was a category two hurricane over the open waters of the eastern North Pacific. Paul weakened to a tropical storm as it passed south of Baja California, then made landfall along the coast of mainland Mexico near the southern end of Isla Altamura and later dissipated inland over mainland Mexico. Paul caused significant rainfall and floods in the Mexican state of Sinaloa and was responsible for four deaths.

The primary factors that made 2006 so different from 2006 were changes in sea surface temperatures in the Atlantic Ocean, the developing El Niño and changes in large-scale winds like the Bermuda High. African dust is being intensively investigated and is thought to be a secondary factor that mostly affected the strengthening of storms.

Although the Atlantic Ocean experienced a much calmer hurricane season in 2006 than it did in 2005, some of the factors that made it that way may or may not be in place during the 2007 season, and NASA scientists will be keeping a close eye on the Atlantic.