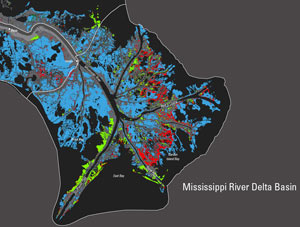 How much of this transformation of land to water is permanent can only be determined after continued field studies as well as aerial photography and analysis of satellite imagery after each growing season.

USGS assessed changes in land and water coverage in coastal Louisiana within two months of Hurricanes Katrina and Rita (Aug. 29 and Sept. 24, 2005, respectively) by using Landsat Thematic Mapper (TM) satellite imagery. The purpose of this study was to provide preliminary information on land-water area changes in coastal Louisiana shortly after both hurricane landfalls and to serve as a regional baseline for monitoring wetland recovery following Hurricanes Katrina and Rita.

The USGS Center for Earth Resources Observation and Science (EROS) provided multiple Landsat images of coastal Louisiana that were acquired immediately before and after the hurricane landfalls. Land-water conditions before the storms were represented using imagery acquired between October 13 and November 7, 2004. A series of seven Landsat TM scenes acquired between October 16 and October 25, 2005, provided a snapshot of landwater area changes after the storms. The 2004 and 2005 data sets were matched to the 1956 data covering the common area of the Louisiana Coastal Zone Boundary (CZB) and Louisiana Coastal Area (LCA) to ensure compatible comparisons between data sets.

Square miles of land changed to water in southwestern Louisiana by basin is Calcasieu/Sabine basin, 22; Mermentau, 62; Teche/Vermilion, 5; and Atchafalaya, 9. The 62 square miles of land in the Mermentau basin included significant flooded marshes primarily between Calcasieu Lake and White Lake.

Land transformed to water along the coast and on barrier islands further reduces Louisiana’s natural protection from future storms. Louisiana had already lost 1,900 square miles of coastal lands, primarily marshes, from 1932 to 2000. The 217 square miles of potential land loss from the 2005 hurricanes represent 42 percent of what scientists had predicted, before Hurricanes Katrina and Rita, would take place over a 50-year period from 2000 to 2050, even though they had factored storms into their model.

The new study was done to provide preliminary information on land to water area changes in coastal Louisiana that were present shortly after both Hurricane Katrina (Aug. 29) and Hurricane Rita (Sept. 24) in 2005. The study will also serve as a regional baseline for monitoring wetland recovery. While the entire coast was affected by both Hurricanes Katrina and Rita, the areas west of the Mississippi River were impacted more by Rita.

Some transformations of land to water are permanent and were caused by direct removal of land by storm surge. Others may be transitory or temporary, including flooded and impounded areas. Only an analysis of land after future growing seasons will determine how permanent the changes are. While some land will recover, indications are that some of the change may be permanent, with some new areas of open water likely becoming lakes. For example, as of Sept. 16, 2006, flights indicated that some of the large marsh shears or rips in the Breton Sound area have remained open water.

Temporary land change could be caused by remnant flooding of marsh; removal of floating and submerged aquatic plants; scouring of marsh vegetation; or even water-level variations caused by normal tide and meteorological variation between the satellite images that the analysis was based on.

There were even some new land gains calculated in the latest USGS work. These land gains could also be temporary, caused by winds depositing wrack; marsh moved by the storm surge; aquatic vegetation that was possibly misidentified or classified; or water-level variations caused by normal tidal and meteorological variations.

Where land was transformed to water after the hurricanes varied in different areas along the coast but followed similar patterns. Shears (ripping or removal of vegetation) were often located in marshes that fringed areas where land had already decreased from 1956 to 2000. But shears also occurred in some historically stable areas such as in the upper Breton Sound basin, the lower Pearl River basin, the marshes bordering the east bank of Freshwater Bayou in the southwestern Teche/Vermilion basin, and the marsh just north of Johnsons Bayou and south of the Sabine National Wildlife Refuge in the Calcasieu/Sabine basin.

Hurricane Rita’s surge removed remnant marsh from areas with historical land loss caused by a rapid collapse during the mid-1960s to the mid-1970s in western Barataria basin and central and eastern Terrebonne basin. Similar patterns were observed on the west bank of Freshwater Bayou, due east of Pecan Island in the southwestern Teche/Vermilion basin; south of Sweet Lake in the Mermentau basin; due east of Deep Lake in the Mermentau basin; and north of Mud Lake in the Calcasieu/Sabine basin.

Further analyses were made by comparing the 2004 imagery to that of 2001 to provide an estimate of normal variations in seasonal land and water area changes before the 2005 hurricanes.

The new land change estimates appear in the USGS Open-File Report 2006-1274, “Land area changes in coastal Louisiana after the 2005 hurricanes.” This report is a series of three maps with explanatory text. The maps will be available through the USGS Publications Warehouse at http://infotrek.er.usgs.gov/pubs/ after Oct. 1. A more detailed report of the analysis will be available later in the fall in a USGS Circular entitled “Science and the Storms: USGS Response to the Hurricanes of 2005.”