NASA Looks Back at Hurricane Katrina One Year Later
The 2005 hurricane season will long be remembered both for the record-breaking number of storms and a devastating hurricane named Katrina. 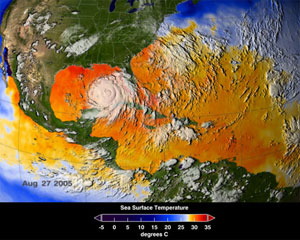 Image right: This image depicts a 3-day average of actual sea surface temperatures (SSTs) for the Caribbean Sea and the Atlantic Ocean, from August 25-27, 2005, as measured by the Advanced Microwave Scanning Radiometer (AMSR-E) instrument on NASA's Aqua satellite. Areas in yellow, orange or red represents ocean temperatures of 82 degrees Fahrenheit or above. Click image to enlarge. Credit: NASA/SVS

Several NASA satellites gave important details about Katrina's storm structure and strength throughout her life cycle, aiding forecasters and emergency managers. In the aftermath, data from satellites and instruments on NASA planes became useful in recovery efforts, damage assessments, and analysis of the storm's environmental impacts. Katrina left as many as 1,833 dead according to the National Hurricane Center, and over $80 billion in damage.

Katrina began as only a feeble storm being tracked by satellites and forecasters. On Aug. 23, Katrina was nothing but a mass of organized clouds over the Bahamas. But later that day, she quickly intensified and headed toward the U.S. coastline. Late on Aug. 25, she made her first landfall just south of Fort Lauderdale, Fla., as a Category 1 hurricane. 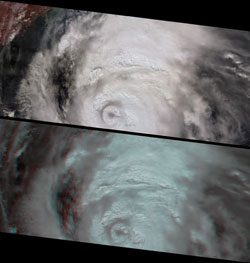 Image/animation left: This image pair and animation from NASA's Multi-angle Imaging SpectroRadiometer (MISR) shows the massive cloud development associated with Katrina on August 27 as she moved west through the Gulf of Mexico. Over 7 minutes, the animation captures the cloud-top sides, rotation of the eyewall, and the bubbling growth of the towering cloud structures. Click image to view animation. Credit: NASA

As Katrina moved into the Gulf of Mexico, atmospheric conditions were favorable for rapid development. Data from the Advanced Microwave Scanning Radiometer (AMSR-E) instrument on NASA's Aqua satellite showed unusually warm ocean temperatures in her path -- prime fuel for a hurricane.

By early in the morning of Aug. 28, Katrina's winds reached a remarkable 175 mph -- a category 5 storm -- with a central pressure of 902 millibars, the fourth lowest pressure ever recorded in the Atlantic. During this phase of rapid development, forecasters were aided by data from NASA's Multi-angle Imaging Spectroradiometer (MISR) instrument on the Terra satellite that supplied information on Katrina's cloud motion and height, improving the accuracy of forecasts and warnings. 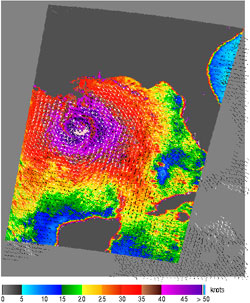 Katrina's peak intensity was also captured by NASA's Tropical Rainfall Measuring Mission (TRMM) satellite that looked through the storm's clouds to reveal the underlying rain structure. Rain rates in the center of Katrina were gathered by the TRMM Precipitation Radar, the only radar capable of measuring precipitation from space. Details on rainfall intensity were also available from the Atmospheric Infrared Sounder (AIRS) on NASA's Aqua satellite that can identify regions of greatest tropical moisture. The shear power of monster storms like Katrina makes accurate measurements of wind and rainfall more difficult. Scatterometers, like NASA's QuikSCAT, help overcome this problem. By sending energy through the atmosphere to the ocean surface and measuring the amount of energy that bounces back from the wind-roughened surface, meteorologists determine a storm's wind speed and direction. Although tropical cyclones of category 5 strength are rarely sustained for long, Katrina only barely weakened and remained a strong category 4 storm for many hours, despite a run in with drier air (which tends to weaken hurricanes) and an opening of the eyewall before her second landfall early on Aug. 29. Wind speeds over 140 mph were observed in southeastern Louisiana with gusts over 100 mph just west of the eye in New Orleans. 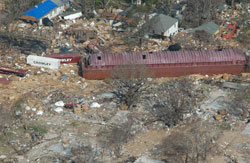 The loss of life and property damage was worsened by breaks in the levees that separate New Orleans, La., from surrounding Lake Pontchartrain and Lake Maurepas. At least 80 percent of New Orleans was under flood water on Aug. 31, largely as a result of levee failures from Lake Pontchartrain, leaving some parts of the city under 20 feet of water. Storm surge from Mobile Bay led to inundation of Mobile, Ala.; and large portions of Biloxi and Gulfport, Miss., were underwater and essentially swept away by a 25-30 foot storm surge. Within two city blocks of Biloxi, two floating casinos disappeared.

The flooding in New Orleans persisted for weeks and was captured by several NASA satellite instruments, including the Moderate-Resolution Imaging Spectroradiometer (MODIS) on NASA’s Terra satellite.

In wake of the storm, changes to the coastline were observed by NASA’s Experimental Advanced Airborne Research Lidar (EAARL) mapping system that was flown on research aircraft. This mapping system is able to "see" through vegetation, like trees and shrubs, and view the land underneath to help determine hazard areas and environmental loss. The EAARL data proved helpful to emergency managers in rebuilding efforts. 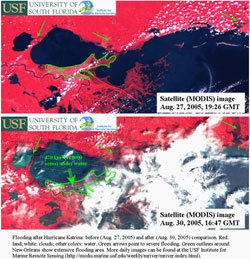 In Louisiana, scientists estimate that 25 percent of the coastal wetlands, which help lessen storm surges and weaken powerful winds, have disappeared in the 20th century, making inland areas more vulnerable to storms.

Although 2005 was an unusually active year, meteorologists predict hurricane seasons with above-average activity for at least the next decade. In the future, NASA satellites and instruments will continue to monitor hurricane breeding grounds and provide unprecedented detail on their size and strength so forecasters can be alerted and issue more accurate forecasts and warnings.