Red tides are harmful blooms of algae. Algae are tiny plants mostly found in the ocean that contain a green pigment or color called chlorophyll. Red tides, which may or may not be harmful, are primarily caused by the toxic phytoplankton, Karenia brevis on the west Florida Shelf. This species of phytoplankton can produce toxins that can kill marine organisms and lead to irritation of the eye and respiratory systems of animals and people. 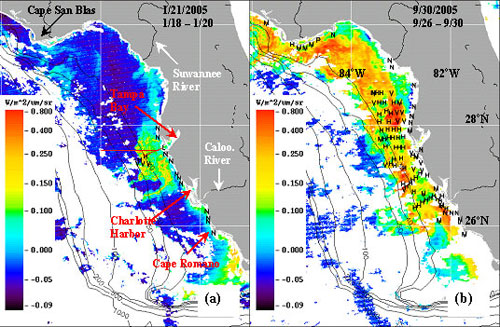 Scientists believe that Florida's very active 2004 hurricane season may have played an important part in the red tide that spread over a large area and lasted a long time off Florida's west coast in 2005.

The four hurricanes that crossed the Sunshine State in August and September 2004 dumped as much as 27 inches of rain (nearly double the regular amount of rain) in central Florida. All that rain increased the amount of pollution that flowed on the earth's surface and into rivers and the ocean (called runoff). It may also have increased the amount of groundwater (water that flows underground) because some was absorbed into the ground. These two things are thought to create conditions needed for the bloom of red tide. 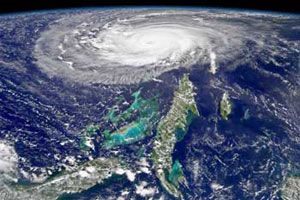 Image to left: NASA's Moderate Imaging Spectroradiometer (MODIS) instrument onboard both NASA's Terra and Aqua satellites tracked Hurricane Frances in 2004. The animation begins in the Eastern Caribbean on August 27th and ends on September 3rd. During the 2004 hurricane season, Frances was one of four hurricanes that crossed the state of Florida. The others were Charley, Ivan and Jeanne. Credit: NASA

Scientists Chuanmin Hu and Frank Muller-Karger of the University of South Florida, and Peter Swarzenski of U.S. Geological Survey, all of St. Petersburg, Fla., said there were several things that led to that red tide of 2005. The four hurricanes in 2004 brought heavy rain, and created a lot of runoff. Also, it is possible that a lot more ground water went into the ocean, and it flowed into the water from below the ocean floor. All of the nutrients (like nitrogen) that washed into the ocean helped create more of the algae that made up red tide.

The scientists used NASA satellites, ships, and buoys from the National Oceanic and Atmospheric Administration (NOAA) to study and track red tide.

During the 2004 hurricane season, four hurricanes hit Florida: Charley, Frances, Ivan and Jeanne. Scientists believe that Hurricane Charley's rainfall over central Florida was between six and eight inches. Frances produced rainfall of more than ten inches over large portions of the central and northern Florida peninsula. Ivan produced between three and seven inches or rain in parts of the Alabama and the Florida Panhandle. Finally, Jeanne produced widespread rainfall of up to eight inches across eastern, central and northern Florida, with 11 inches over extreme northeast Florida. 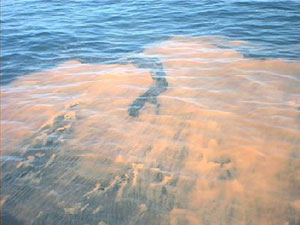 Image to right: Image of red tide taken from the NOAA vessel Ron Brown, April 5, 2001. Red tides are a dangerous increase in small ocean plants called algae. During a red tide, algae may release toxins into the water and air. Sea lions, fish, birds, and even people can get sick and die. Credit: NOAA

Red tides occur in the same area off west-central Florida almost every year, mostly between August and March, from north of Tampa to south of Naples, Fla. The 2005 red tide poisoned the ocean waters and killed deaths of fish, turtles, birds, and marine mammals. This red tide was unusual because it lasted an entire year and was extremely large in September 2005.

But the groundwater that traveled beneath Florida, and came up into the ocean through the ocean floor may have added to that nitrogen.

Hu and his colleagues proposed that the unusual number of hurricanes in 2004 resulted in high runoff, and possibly in higher than normal discharge of groundwater coming into the west Florida coast throughout 2005. The groundwater discharge may also explain why the red tides happen in the same area almost every year, but also why they happen in other coastal regions of the Gulf of Mexico, Hu and Swarzenski said.

By the end of December, 2004 a NASA satellite showed that the red tide covered 425 square miles off Tampa Bay. By late September the bloom expanded to approximately 26,062 square miles.