What Is It Like to Be on a NASA Hurricane Mission?
The NASA African Monsoon Multidisciplinary Analyses (NAMMA) mission is a field research investigation where scientists are investigating how hurricanes are born off the African coast. It has been taking place in the Cape Verde Islands, 350 miles off the coast of Senegal in west Africa, in August and through mid-September, 2006.

Scientists are using airplanes, sensors, radar, computer modeling programs and NASA satellites to better understand hurricanes. Some of the NASA satellites include Aqua, the Tropical Rainfall Measuring Mission (TRMM), and the recently-launched Cloudsat/CALIPSO satellite. Edward Zipser of the University of Utah, Salt City, is the chief mission scientist. Following is an on-location report from Dr. Zipser during the NAMMA Hurricane field mission. 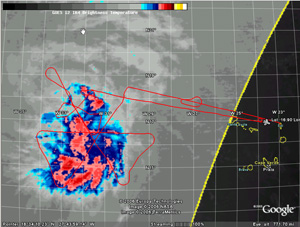 Image right: Flying Around a Tropical Disturbance: This is an image from Google Earth that shows the flight path (red line) of NASA's DC-8 aircraft around a tropical disturbance (in red and blue) near the Cape Verde Islands, off the African coast. This was the flight path for August 23, 2006. Credit: NASA

On August 23, 2006, scientists on the NAMMA mission took an eight hour flight into a tropical disturbance. Edward Zipser noted "surprisingly strong winds at 700 millibars (approximately 10,000 feet high), considering how the system seemed to be struggling to survive in the midst of the Sahara Air Layer."

Spotting Dry Air in a Storm

The Saharan Air Layer (SAL) is a mass of very dry, dusty air which forms over the Sahara Desert during the late spring, summer, and early fall and usually moves out over the tropical Atlantic Ocean. The SAL usually extends between 5,000-20,000 feet in the atmosphere and is associated with large amounts of mineral dust, dry air and strong winds (~25-55 mph).

Zipser said, "We saw evidence of dry air, typically from 750-550 millibars (10,000 to 19,000 feet), on almost all quadrants, but of course we won’t know right away how much of this air actually entered the inner core of the storm."

Communicating Between the Ground and Air

During the previous two flights into the tropical system, the scientists used a communications system called "X-Chat" system. The main advantage was that mission scientist, Jeff Halverson, who was on the ground, watched movie loops of the tropical system and he was able to pass information to the DC-8 aircraft, while the flight scientist could rapidly relay information back.

The scientists on the DC-8 aircraft noted that the storm structure they were flying over featured was not symmetrical (not identical on both sides of a central line) below about 6-7 kilometers (around 4 miles) altitude. They also noted that the system's strongest winds were on the east and north side.

Image/animation left:Animation of Dropsonde (Sensor): Researchers in high-flying planes drop temperature-taking instruments into tropical cyclones from about 3 miles above it. Described by a researcher as "Pringles cans with parachutes," sensors called 'dropsondes' are dropped into tropical cyclones to obtain temperature, pressure, moisture and wind readings throughout different locations of the storm. Credit: NASA

Another benefit to flying into a storm was that the scientists were able to better determine its exact location. The storm was found to be north of the forecast position. Zipser and his crew dropped about 24 dropsondes into the storm. A dropsonde is a sensor that measures temperature, pressure, moisture and winds throughout different locations of a storm.

When the scientists flew into the tropical cyclone, they noticed that there were two different air circulations happening, like layers of a cake. In the top layer, higher than the surface, (above 500-400 millibars or 20,000 feet), the center of the cyclone seemed to be well southeast of the cyclone that was on lower level (at the surface).

When the scientists flew over the “eye” or center of the tropical cyclone at a height of 35,000 feet, they we were continuously in thick cirrus clouds (wispy clouds made of ice crystals). Later, however, they were able to look at data from the PR-2 (an airborne radar) showing a sloping eyewall to 7 kilometers (4.3 miles).

Convection (rising air that condenses higher in the atmosphere to form clouds and storms) decreased during the flight with little or no significant turbulence and no large areas of organized rainfall from stratiform clouds (layered clouds).

Measuring the Winds Above and on the Surface

The dropsondes were not spaced closely enough to give a proper description of the wind circulation close to the center of the storm, so the plane carrying Zipser and his crew descended to 10,000 feet (700 millibars) where they mapped the winds on the north and east sides of the storm. Winds were about 40 to 50 nautical miles per hour (45-55 mph), and there were some winds in excess of 60 knots (70 mph). There were no strong winds on the south side of the storm. The scientists estimated the winds on the surface around 40-45 knots (45-51 mph).

Every flight into a storm gives scientists more information about how tropical cyclones work. The NAMMA mission ends in mid-September, 2006.