Image left: A vertical slice through the center of Hurricane Emily shows the rain structure across the entire storm. Note the lack of precipitation inside the eye of the storm compared to the intense thunderstorm just outside of it, in the eyewall. The areas of heaviest rainfall are shown in red and the lightest are in blue. The rainfall structure was measured by NASA's ER-2 Doppler Radar (EDOP) as part of the 2005 Tropical Cloud Systems and Processes (TCSP) Mission currently taking place in Costa Rica. When the EDOP flew over the storm to get this data, early morning on July 17th, Hurricane Emily was nearly 210 miles across and 60,000 feet high. Credit: NASA

In 2005, scientists did perk up, because a very strong Hurricane Emily had some of the most lightning activity ever seen in a hurricane. Scientists are now trying to determine if the frequency of lightning is connected to the hurricane's strength. 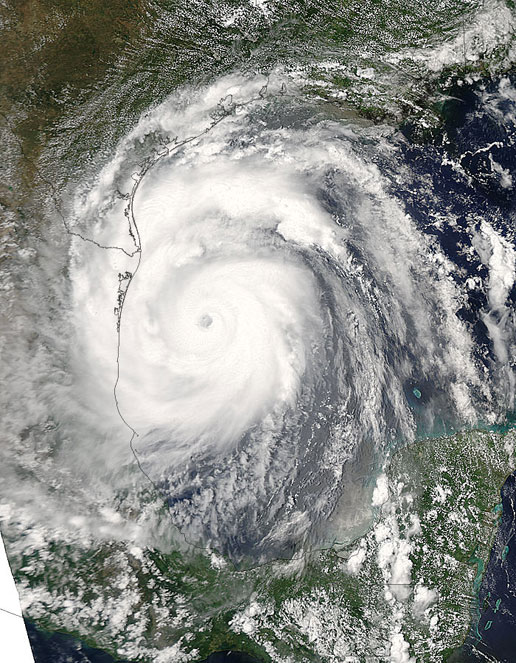 Image right: The Tropical Rainfall Measuring Mission (TRMM) satellite captured this remarkable image of a rejuvenated Hurricane Emily in the western Gulf of Mexico. The image was taken at 17:36 UTC (1:36 pm EDT) on 19 July 2005 as Emily was bearing down on the northern coast of Mexico. The image shows a top-down perspective of the rain intensity within Emily as obtained from TRMM's sensors. Rain rates in the center of the swath are from the TRMM Precipitation Radar (PR), a radar that can measure precipitation from space. Rain rates in the outer swath are from the TRMM Microwave Imager (TMI). The rain rates are overlaid on infrared (IR) data from the TRMM Visible Infrared Scanner (VIRS). The eye of Emily is clearly visible in the center of the storm as a red semicircle indicating heavy rain intensities. At the time of this image, Emily was classified as a strong Category 1 hurricane with maximum sustained winds reported at 95 mph by the National Hurricane Center. The storm was moving west-northwest at 14 mph and was located 210 miles southeast of Brownsville, Texas. Credit: NASA

In July of that year, NASA lightning researchers joined hurricane specialists from the National Oceanic and Atmospheric Administration (NOAA) and 10 universities for a month-long Tropical Cloud Systems and Processes (TCSP) field experiment in Costa Rica. The purpose of the mission was to determine what weather, climate and other factors that helped create tropical storms and hurricanes. They also wanted to learn about what makes these storms strengthen. All of these organizations study lightning in hurricanes to get a better understanding of the strengthening or weakening (intensification) of the storms.

Hurricane Emily was one of three named storms (the others were Hurricane Dennis and Tropical Storm Gert) observed during the TCSP field experiment. Scientists flew NASA's ER-2 high-altitude weather plane above Emily, where they recorded some of the most powerful lightning activity ever seen in a hurricane’s eye-wall. Emily was one of the largest, most violent hurricanes ever to be documented by the ER-2 plane.

During the flights, scientists detected both cloud-to-ground lightning strokes and cloud-to-cloud lightning in the thunderstorms surrounding Emily's eye. They also found that the "electric fields," or areas of the atmosphere that contained electricity above Hurricane Emily, were some the strongest ever recorded. "We observed steady fields in excess of 8 kilovolts (8,000 volts) per meter (3.2 feet)," says Blakeslee. "That is huge—and comparable to the strongest fields we would expect to find over a large land-based thunderstorm." 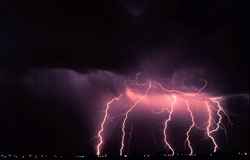 The field experiment concluded before the birth of hurricanes Katrina and Rita in 2005. However, scientists also observed significant lightning in the eye walls of hurricanes Katrina and Rita through long range ground-based lightning detection networks. That similarity has generated more interest in trying to understand the connection between lightning activity and hurricane development, intensification and behavior.

Researchers at the National Space Science and Technology Center, a facility jointly managed and operated by NASA MSFC and Alabama research universities, are working with the NOAA to better understand the connection between lightning and hurricane intensity.

The month of June is typically known among meteorologists for promoting lightning safety awareness, because June is the first month of summer and brings thunderstorms. For more information about lightning safety, please visit on the Web: http://www.lightningsafety.noaa.gov/

For more information about NSSTC Lightning Studies, visit on the Web, visit: http://thunder.nsstc.nasa.gov/