Typhoon Xangsane made landfall in Vietnam on Sat. Sept. 30, and by Sun. Oct. 1, had passed through southern Laos and into Thailand as a tropical depression.

On its westward track, Xangsane brought heavy rains with it. In Vietnam, 13 people were reported killed from storm related injuries. It was packing winds of 55 kilometers (34 mph). The Bangkok Post reported that in Vietnam, Xangsane ripped roofs off thousands of buildings, including an airport terminal. In the coastal cities of Danang and Hoi An, two of Vietnam's major tourist cities, most of the 800,000 residents were without power for a second day. 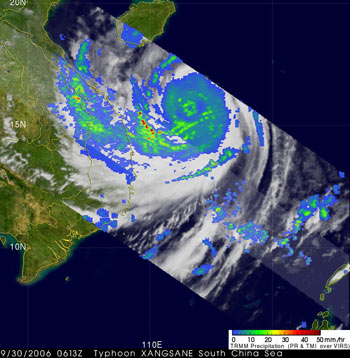 Click image to enlarge
This is an image of Tropical Depression Xangsane's rainfall as it was about to make landfall in Vietnam on Sat. Sept. 30. It was created from data obtained by the Tropical Rainfall Measuring Mission (TRMM) satellite on Sept. 30 at 2:13 a.m. EDT (0613 UTC). Some areas indicate up to 40 millimeters (1.5 inches) per hour of rain falling, as depicted in red around Xangsane's center. TRMM is a joint mission between NASA and the Japanese space agency JAXA. Credits: Caption - Rob Gutro, Goddard Space Flight Center: Image - Hal Pierce (SSAI/NASA GSFC)

The Tropical Rainfall Measuring Mission (TRMM) satellite has proven itself to be a valuable tool for monitoring tropical cyclones. TRMM captured these images of Xangsane as it developed near the Philippines. 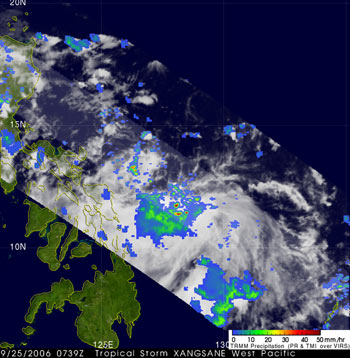 Xangsane began as a tropical depression on Sept. 25 in the western Philippine Sea just 200 miles east of the central islands. The first image from TRMM shows the depression as it was nearing the central Philippines. The image was taken at 7:39 UTC Sept. 25 and shows the horizontal distribution of rain intensity as seen from the TRMM satellite. Rain rates in the center swath are from the TRMM Precipitation Radar (PR), a first-of-its-kind space-borne precipitation radar, while rain rates in the outer swath are from the TRMM Microwave Imager (TMI). The rain rates (how much rain is falling per hour) are overlaid on infrared (IR) data from the TRMM Visible Infrared Scanner (VIRS).

TRMM shows that the depression consists of a coherent area of light (blue) to moderate (green) rain. A few isolated areas of heavy rain (shown in red) are also present. At this time, there is little evidence of organization. The system has no eye or eyewall and no evidence of banding (curvature) in the rain field, which would indicate the presence of a circulation. The system did, however, become better organized and was named Tropical Storm Xangsane about 10 hours after this image was taken. 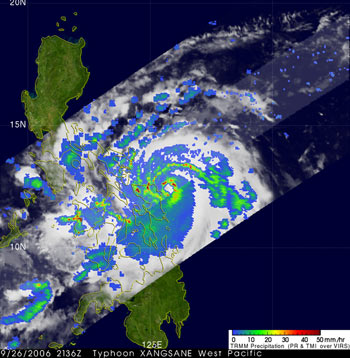 As Xangsane headed west-northwest towards the central Philippines, initial intensification was slow with the system remaining a tropical storm on the 26th (local time). However, as it was nearing Samar, Xangsane began to intensify more rapidly. The next image was taken by TRMM at 21:36 UTC 26 September as Xangsane was bearing down on northern Samar in the central Philippines. TRMM now reveals a very different looking system. Xangsane now has a complete eyewall composed of moderate to heavy rain (green ring with areas of red), surrounded by spiral rainbands. These features are consistent with the well-developed circulation of a mature tropical cyclone. 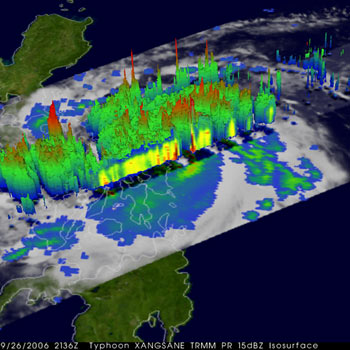 The final TRMM image was taken at the same time as the previous image and shows a 3-D perspective of Xangsane using data collected from the TRMM PR. The higher tops are indicated in red. Deep convective towers that are part of the eyewall form a ring around the center. These can be a precursor to future strengthening.

Additional tall towers are associated with the outer rainbands farther away from the center. At the time of these images, Xangsane was estimated to have sustained winds of 65 knots (75 mph), making it a minimal Category 1 typhoon. However, the storm was in the process of intensifying and became a Category 2 storm just hours later with sustained winds estimated at 90 knots (104 mph) as it neared Samar. TRMM is a joint mission between NASA and the Japanese space agency JAXA. For more information and images from TRMM, visit: + TRMM website Credits: Image: Hal Pierce, SSAI/NASA GSFC; Caption: Steve Lang, Science Systems and Applications, Inc., Goddard Space Flight Center


Typhoon Xangsane Over the Philippines 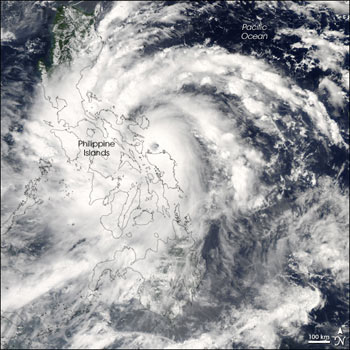 Click image to enlarge
Typhoon Xangsane formed on September 25, 2006, in the western Pacific near the coast of the Philippine Islands. Over the next 36 hours, it grew from a tropical depression (area of low air pressure) to a typhoon. As of September 27, it was right on the eastern edge of the Philippines, with the eye of the storm sitting just offshore. Winds had reached 210 kilometers per hour (130 miles per hour) near the core of the storm, according to the University of Hawaii’s Tropical Storm Information Center.

This photo-like image was acquired by the Moderate Resolution Imaging Spectroradiometer (MODIS) on the Terra satellite on Sept. 27, 2006, at 1:00 p.m. local time (05:00 UTC). At this time, Xangsane was over the Philippines. It was a well-defined, spiralling swirl of clouds, with a distinct, but cloud-filled (“closed”) eye. Storm track projections on September 27 suggested that the typhoon would lose power as it crossed the islands, and rebuild only slightly as it continued west across the South China Sea. The storm was predicted to come ashore on the Asian mainland in central Vietnam on October 2. Credit: NASA/ GSFC, Jeff Schmaltz, MODIS Rapid Response Team


Tropical Cyclone Xangsane Headed to Phillippines Then Toward Vietnam 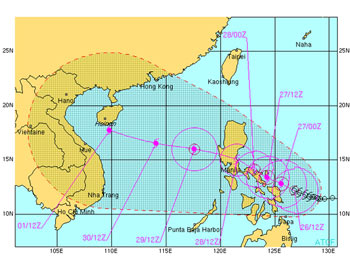 Click image to enlarge
This is the forecast track for tropical storm Xangsane which is expected by October 1 to be just south of the Hainan Province of China and headed into the Gulf of Tonkin. Credit: U.S. Navy/Joint Typhoon Warning Center Tropical Storm "Milenyo" has two names. By international code the storm is called Xangsane. To forecasters in the Philippines, the storm is known as Milenyo. The U.S. Navy's Joint Typhoon Warning Center noted at 8:00 a.m. EDT or 1200 UTC on Sept. 26, Tropical Storm Xangsane was located in the western Pacific Ocean near 12.2 north latitude and 126.8 east longitude. It is moving to the west-northwest at around 6 mph (5 knots), with maximum sustained winds near 63 mph (55 knots) and gusts to 80 mph (70 knots).

Xangsane is headed for the eastern Philippines and is expected to bring heavy rains, maximum winds of 40 mph (65 kilometers/hour) and gusts of up to 53 mph (85 kph) before making landfall on Thurs. Sept. 28. Several islands were placed on alert that include: Samar, Dinagat, Leyte, Biliran and Siargao. At 10 a.m. local time on Tues. Sept. 26, the Philippine Atmospheric, Geophysical and Astronomical Services Administration placed Tropical Storm Xangsane or Milenyo at 136 miles (220 kilometers) east-northeast of Borongan, Eastern Samar.

The forecast track for tropical storm Xangsane places the storm just south of the Hainan Province of China and headed into the Gulf of Tonkin by Oct. 1.

Meanwhile in the Atlantic and Eastern Pacific…

At 11:30 a.m. EDT on Tues. Sept. 26, the National Hurricane Center (NHC) was not reporting on any tropical cyclones in the north Atlantic, Caribbean Sea or Gulf of Mexico. The NHC did mention that cloudiness and showers related to a broad area of low pressure should be watched. It's located about 900 miles east-northeast of the northern Leeward Islands. In the eastern Pacific, all is quiet, as tropical storm formation is not expected through Wed. Sept. 27. Caption credit: Rob Gutro -- Goddard Space Flight Center