Hurricane John was a Category 2 hurricane with sustained winds of 110 mph when it struck near the southern tip of Mexico's Baja Peninsula late on Friday, September 1, but officials reported only minor damage. The area hardest hit was La Paz, the capital of Baja California del Sur state, where up to 20 inches of rain had fallen.

By early Monday, September 4, the storm's maximum sustained winds had slowed to about 30 mph, well below the threshold for a tropical storm, as it slowly moved northwestward up the spine of the narrow Baja Peninsula.

On Tuesday, September 5, much of the southwestern United States was under clouds and rain as the remnants of John moved closer to the region. The normally dry region of southern New Mexico got enough rain to cause isolated road flooding, John's remnants brought southern Arizona scattered rain, and showers were forecast in desert areas of Southern California east through west Texas. 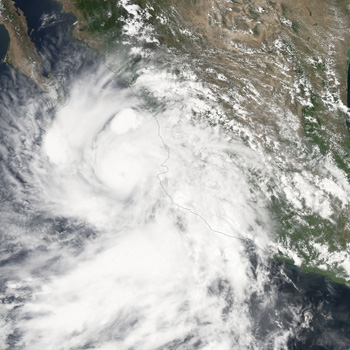 This photo-like image of Hurricane John was acquired by the Moderate Resolution Imaging Spectroradiometer (MODIS) on the Aqua satellite on August 31 2006, at 2:10 p.m. local time (20:10 UTC), when the storm's maximum sustained winds were around 105 miles per hour. At the time of this image, John's center was still offshore, but it soon made landfall on the southern tip of Mexico's Baja Peninsula. Image Credit: NASA/MODIS Rapid Response Team -- Image Caption: NASA/RSIS, Mike Bettwy 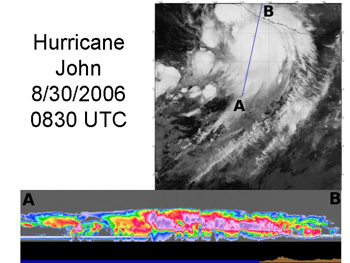 These two images are from two different satellites, giving a top-down and sideway view of Hurricane John in the eastern Pacific Ocean at 0830 UTC (4:30 a.m. EDT) Aug. 30.

The top image is from the National Oceanic and Atmospheric Administration's Geostationary Operational Environmental Satellite (GOES) to give an idea of how the storm looked from the top. This data was processed by NASA's GOES Project at the Goddard Space Flight Center, Greenbelt, Md. The bottom images are from CloudSat. The CloudSat image (bottom) was taken from NASA's CloudSat satellite on Aug. 30. The two images match well and indicate the cloud patterns in the storm.

The red and purple areas on the CloudSat image (bottom) indicate large amounts of cloud water. The blue areas along the top of the clouds indicate cloud ice, while the wavy blue lines on the bottom center of the image indicate intense rainfall, peaking around the core of the storm. The solid line along the bottom of the panel, which is the ground, disappears in these areas of intense precipitation. Image credit: NASA/JPL/The Cooperative Institute for Research in the Atmosphere (CIRA), Colorado State University/NOAA -- Caption: Mike Bettwy, NASA/RSIS, from NHC and wire reports 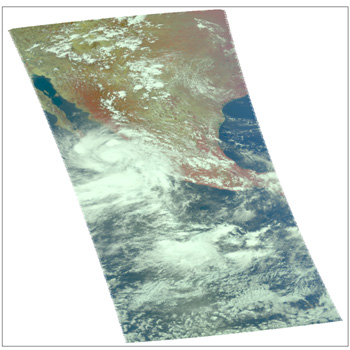 Hurricane John captured by the visible light/near- infrared sensor on the AIRS instrument on Aug 31 at 1200 UTC (8:00 a.m. EDT). This is what John looks like to the naked eye. Image Credit: NASA/JPL -- Caption: NASA/RSIS, Mike Bettwy

At 1500 UTC (11:00 a.m. EDT) the center of Hurricane John was near latitude 22.0 north, longitude 108.8 west or about 95 miles southeast of the southern tip of Baja California and about 160 miles west-northwest of Las Islas Maris, Mexico. John is moving toward the northwest near 7 mph and will be very close to the southern Baja Peninsula late in the day.

John is a dangerous Category 3 hurricane with maximum sustained winds near 115 mph and is expected to strike the southern tip of the Baja Peninsula late Friday. Little change in intensity is expected over the next 24 hours.

Coastal storm surge flooding of up to 5 feet above normal tide levels, combined with large and dangerous waves are expected in areas of onshore flow near the path of the center of the hurricane.

Rainfall amounts of 6 to 10 inches, with isolated maximum storm totals up to 15 inches are possible across the southern Baja Peninsula. The west coast of central Mexico could receive an additional 3 to 5 inches of rain with maximum storm totals of 18 inches possible. These rains could cause life-threatening flash floods and mudslides over areas of mountainous terrain.

In preparation for the storm, officials on Thursday ordered the evacuation of about 10,000 people from Cabo San Lucas and San Jose del Cabo and at least 5,000 others from La Paz, the capital of the state of Baja California del Sur. Shelters had been set up at more than 100 schools. Shop owners and hotels boarded up windows and workers stripped rooms of light fixtures and furniture, in case plate-glass windows were shattered. Long lines snaked from gas stations and grocery store shelves were picked clean of many items.

Forecasters believe John will begin moving more rapidly in about 12 hours and should continue on a northwest track before turning more westerly. As John clears the Baja Peninsula and travels over cooler water, the storm should begin weakening rapidly in about 48 hours, ultimately dissipating over the open water of the Pacific.

The 2006 East Pacific hurricane season is now in full swing with 2 active storms in the heart of the season. The total number of named storms so far is near the climatological average and near the number from last year. Recently, Tropical Storm Kristy became the 11th named storm of the 2006 season. However, in terms of intense storms, this year's pace is well above normal and far outdistances the 2005 season. When Hurricane John reached Category 3 intensity on the 29th of August 2006, it became the 5th major hurricane of the season. There were only two major hurricanes in 2005 with four being the typical average for the entire season.

At 5:00 a.m. PDT the center of Hurricane John was located near latitude 19.0 north, longitude 105.8 west or about 95 miles west of Manzanillo, Mexico and about 100 miles south of Cabo Corrientes, Mexico. John is moving toward the west-northwest near 14 mph, however, a small deviation in the track could bring the center onshore within the hurricane warning area. Although the center of John is forecast to remain offshore, winds to hurricane force are expected within the hurricane warning area. Maximum sustained winds are near 125 mph with higher gusts. John is a category three hurricane on the Saffir-Simpson scale. Estimated minimum central pressure is 950 millibars, and rainfall amounts of 6 to 10 inches with isolated amounts to 18 inches are possible in the warning areas. Coastal storm surge flooding of up to 5 feet above normal tide levels along with large and dangerous battering waves can be expected near the center of John.

On Aug. 31, Mexican authorities notified coastal area residents in Jalisco and Michoacan to prepare for hurricane conditions. Authorities in Jalisco ordered the evacuation of 8,000 people and urged others to board up their homes. Winds and rain already uprooted trees and caused mudslides in the seaside tourist resort of Acapulco.

Hurricane Kristy West of Hurricane John, in the Open Pacific Waters At 0900 UTC (2:00 a.m. PDT) on Thurs. Aug, 31, Hurricane Kristy was located near 17.6 north and 116.1 west, moving to the northwest near 5 knots (6 mph). Kristy's maximum sustained winds are near 65 knots (74 mph) making her a category one storm. The National Hurricane Center expects further strengthening in the next 24 hours. At present, her minimum central pressure is 987 millibars.

A Satellite View of the Storms

The Tropical Rainfall Measuring Mission satellite (known as TRMM) was placed into service in November of 1997. From its low-earth orbit, TRMM can provide valuable images and information on tropical cyclones around the Tropics using a combination of passive microwave and active radar sensors. TRMM is well-suited to help monitor hurricane activity in the East Pacific.

Currently, powerful Hurricane John, which reached Category 4 intensity on the 30th, is still offshore but dangerously close to the west coast of Mexico. 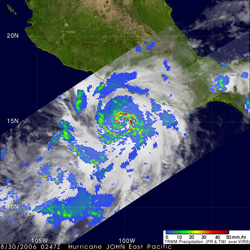 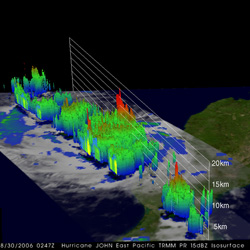 These rain rates are overlaid on infrared (IR) data from the TRMM Visible Infrared Scanner (VIRS). It is evident from this image that John has a well-organized, intense circulation as supported by the tight banding (curvature) in the rain bands (green arcs with areas of red, which indicate bands of moderate rain with areas of heavy rain) surrounding a well-defined eye with a complete inner eyewall (inner most green ring). At the time of this image, John was still a Category 3 hurricane with maximum sustained winds reported at 100 knots (115 mph) by the National Hurricane Center (NHC).

John is forecast to remain just offshore but very close to Mexico before approaching the southern tip of Baja California later in the week.

Meanwhile, about 1600 kilometers off to the west, Tropical Storm Kristy is gaining strength. This next image was taken by TRMM at 12:35 UTC (5:35 am PDT) on the 30th of August as Kristy was passing well to the southwest of Cabo San Lucas heading away from land. TRMM reveals a small but fairly well-organized storm. Although the rain field is confined close to the center, a strong rain band (red arc) wraps around the western side of the storm and indicates an area of active convection near the core, a necessary ingredient for intensification. 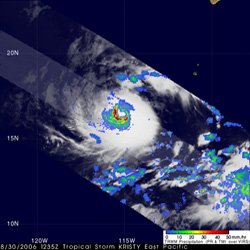 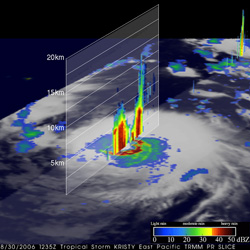 The TRMM PR has the ability to look at precipitation structures in the vertical. This final image shows a coincident vertical cross section through the center of Kristy from the TRMM PR. The PR reveals areas of deeper convection associated with the heavy rain at the surface. Kristy is forecast to strengthen into a hurricane but does not pose an immediate threat to any land areas. TRMM is a joint mission between NASA and the Japanese space agency JAXA. Images produced by Hal Pierce (SSAI/NASA GSFC) and caption by Steve Lang (SSAI/NASA GSFC).

At 11:00 a.m. PDT, the center of Hurricane John was located near latitude 14.3 north, longitude 99.4 west or about 170 miles south of Acapulco, Mexico. John is moving toward the west-northwest near 9 mph. Maximum sustained winds have increased to near 90 mph with higher gusts. John is a category one hurricane on the Saffir-Simpson hurricane scale and could become a category three hurricane by Wednesday, Aug. 30. Estimated minimum central pressure is 977 millibars.

From Acapulco westward to Lazaro Cardenas. A tropical storm watch remains in effect from east of Acapulco eastward to Lagunas De Chacahua and from west of Lazaro Cardenas westward To Manzanillo. Rainfall amounts of 2 to 4 inches with isolated totals up to 8 inches are possible along the south coast of Mexico within the tropical storm watch and warning area. These rains could cause life-threatening flash floods and mud slides over areas of mountainous terrain.

An Inside Satellite Look at John's Clouds 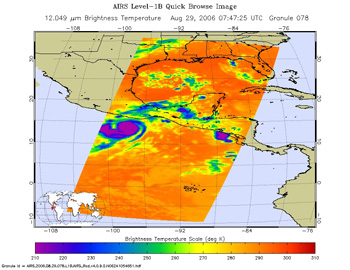 This is an infrared image of Tropical Storm Ernesto, from the Atmospheric Infrared Sounder (AIRS) on NASA's Aqua satellite at 1:30 a.m. PDT on August 29, 2006. This AIRS image shows the temperature of the cloud tops or the surface of the Earth in cloud- free regions. The lowest temperatures (in purple) are associated with high, cold cloud tops that make up the top of the storm. The infrared signal does not penetrate through clouds. Where there are no clouds the AIRS instrument reads the infrared signal from the surface of the Earth, revealing warmer temperatures (red).

Where is John's Heaviest Rainfall? 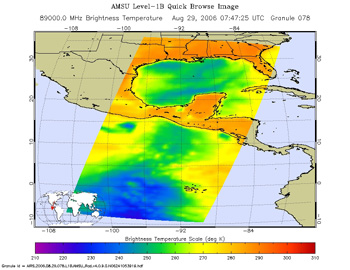 The second image is created from microwave radiation emitted by Earth's atmosphere and received by the instrument. It shows where the heaviest rainfall is taking place (in blue) in the storm. Blue areas outside of the storm where there are either some clouds or no clouds, indicate where the sea surface shines through. Image Credit: NASA/JPL -- Caption Credit: NASA/JPL/ Rob Gutro Goddard