In what has turned out to be a deadly combination, torrential rains brought on by the passage of Super Typhoon Durian together with leftover volcanic ash has resulted in massive mudslides in the Central Philippines.

So far at least 425 people are confirmed dead and nearly 600 more are still missing with little hope of survival. Super Typhoon Durian (known as "Reming" in the Philippines) made landfall in the Central Philippines on November 30 (local time) with reported wind gusts of up to 140 mph. The center crossed over Albay province in the southern part of the main northern Philippines island of Luzon. It was the accompanying heavy rainfall that turned out to be a disaster for the region. Rainfall totals due to Durian are shown in the image for the period November 24 to December 1, 2006 for the Central Philippines and range from 50 millimeters to 250 millimeters.

The Tropical Rainfall Measuring Mission satellite (known as TRMM) was placed into service in November of 1997. From its low-earth orbit, TRMM has been measuring rainfall over the global Tropics using a combination of passive microwave and active radar sensors. The TRMM-based, near-real time Multi- satellite Precipitation Analysis (MPA) at the NASA Goddard Space Flight Center monitors rainfall over the global Tropics. 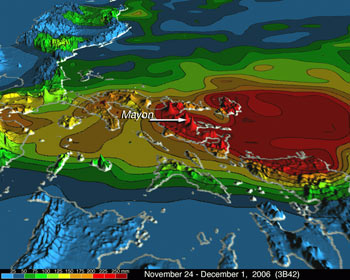 MPA rainfall totals due to Durian are shown here for the period November 24 to December 1, 2006 for the Central Philippines. Rainfall totals exceeding 200 mm (~8 inches) are shown in red and extend from the western Philippine Sea across southern sections of Luzon, Catanduanes Island (northwestern most island shown), and northern Samar. Locally up to 18 inches of rain were reported in Albay province. Mayon volcano is also located in Albay province and is the Philippines' most active volcano. An eruption earlier in the year left the steep slopes covered with a large amount of volcanic ash. It was this combination of ash and the torrential rains from Durian that led to the massive mudslides that buried entire villages in the region.

Where is Durian Now?

Durian is expected to cross southern Vietnam before slightly re-intensifying over the Gulf of Thailand. Forecasters expect Durian will weaken again crossing the Malay Peninsula and will begin dissipating over the Bay of Bengal in the days to come. Credits: Images produced by Hal Pierce (SSAI/NASA GSFC) and caption by Steve Lang (SSAI/NASA GSFC) 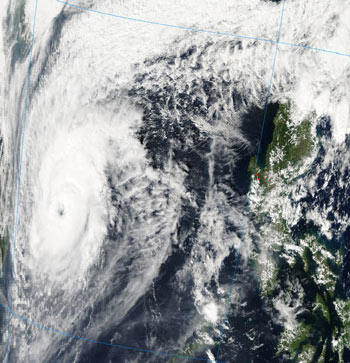 The Northern Philippines Island of Luzon suffered yet another direct hit from a super typhoon this season when Super Typhoon Durian (known as "Reming" in the Philippines) made landfall on the southeastern part of the island. The storm came ashore on the 30th of November 2006 with sustained winds reported at 190 kph (118 mph) by the Philippine weather service with gusts to 225 kph (140 mph). Luzon has been hit hard this year. Super Typhoon Xangsane also hit the southern part of the island back on the afternoon (local time) of September 27th. Super Typhoon Cimaron struck northern Luzon on the evening of October 29th, and more recently Typhoon Chebi again hit northern Luzon on November 11th.

The 24th tropical depression of the West Pacific season formed early on the morning of November 26th (local time) south of Guam and became a minimal tropical storm, named Durian, later that same day. The Tropical Rainfall Measuring Mission (TRMM) satellite was placed into its low-earth orbit in November of 1997. Its primary mission is to measure rainfall from space; however, it has also served as a valuable platform for monitoring tropical cyclones, especially over remote parts of the open ocean. TRMM captured these images of Durian as it was making its way across the West Pacific. 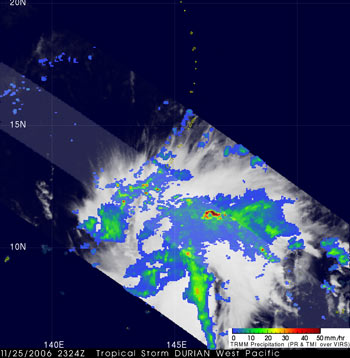 This first image was taken at 23:24 UTC on 25 November 2006 just before TD #24 became a named tropical storm. The image shows the horizontal distribution of rain intensity looking down on the storm. Rain rates in the center of the swath are from the TRMM Precipitation Radar (PR), while those in the outer portion are from the TRMM Microwave Imager (TMI). The rain rates are overlaid on infrared (IR) data from the TRMM Visible Infrared Scanner (VIRS). TRMM reveals that the soon-to-be-named Durian consists of a broad area of light to moderate rain (blue and green areas, respectively). There is no evidence of an eye nor of any banding, indicating that the storm is still in its early formative stages.

Over the next couple of days, Durian continued to track off to the west-northwest taking it into the south-central Philippine Sea. During this period, Durian was slow to intensify and was still a tropical storm on the night of the 27th. Durian finally became a minimal typhoon on the afternoon of the 28th as the storm was beginning to take aim at the central Philippines. On the 29th, Durian intensified significantly and became a super typhoon with maximum sustained winds estimated at 135 knots (155 mph) by the Joint Typhoon Warning Center. 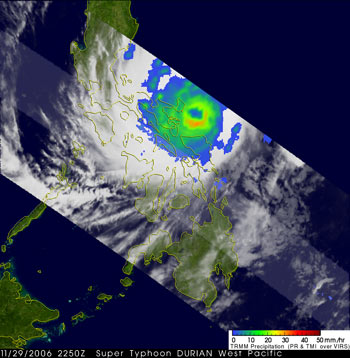 The next image from TRMM was taken at 22:50 UTC 29 November (6:50 am local time) as Durian was bearing down on Catanduanes Island in the central Philippines. Although the center of the storm does fall within the PR swath in this image, it is clear from the TMI that Durian has a well-defined eye surrounded by a symmetric eyewall (green ring). The extreme cyclonic winds in intense storms tend to smear out eyewall features. At the time of this image, Durian was a strong Category 4 typhoon with maximum sustained winds estimated to be 130 knots (150 mph) by the Joint Typhoon Warning Center.

Soon after this image was taken Durian's northern eyewall passed over Virac on the southern tip of Catanduanes Island. The center then made landfall along the south- eastern portion of Luzon in the province of Albay before continuing on westward through the central Philippines. TRMM is a joint mission between NASA and the Japanese space agency JAXA. Images produced by Hal Pierce (SSAI/NASA GSFC) and caption by Steve Lang (SSAI/NASA GSFC). 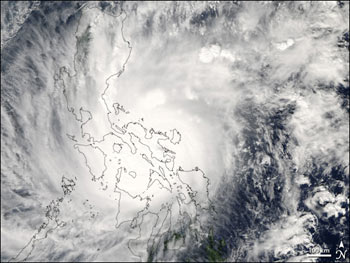 Super Typhoon Durian came ashore in the Philippines on November 30, 2006. According to BBC News Service, the typhoon was quite powerful, with sustained winds as high as 230 kilometers per hour (140 miles per hour). The storm’s name comes from a pungent fruit native to Southeast Asia. The twelfth typhoon of the season, Durian was projected as of November 30 to follow a track through the Philippines very similar to typhoons Xangsane, Cimaron, and Chebi, which all crossed the northern part of the island chain, bringing heavy rain and causing substantial damage. As with those other storms, Durian was expected to continue its eastward track and to cross the South China Sea, striking mainland Asia in Vietnam.

This photo-like image was acquired by the Moderate Resolution Imaging Spectroradiometer (MODIS) on the Aqua satellite on November 30, 2006, at 1:00 p.m. local time (5:00 UTC). At this time, Typhoon Durian was well over the island chain, with the cloud-filled eye over the land and the spiral arms of clouds covering almost the entire northern Philippines. Sustained winds were around 230 kilometers/hour (140 mph), according to the University of Hawaii’s Tropical Storm Information Center. These speeds were the peak strength projected for the storm, which was predicted to lose power as it traveled over the islands. Forecasts for its fate as it crossed the South China Sea were uncertain, but since the typhoon season was waning, sea surface temperatures in the South China Sea were not optimal for storm intensification, and forecasters were expecting the typhoon to gradually lose power well before coming ashore in southern Vietnam. Credits: Image - Jeff Schmaltz, MODIS Rapid Response Team, Goddard Space Flight Center; Caption: Earth Observatory, NASA 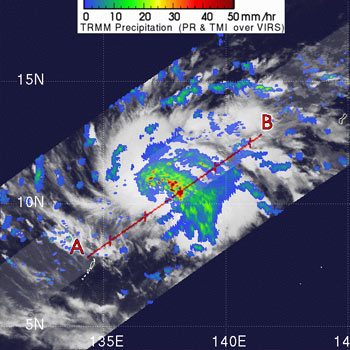 This image of Durian was taken from the Tropical Rainfall Measuring Mission (TRMM) satellite on Nov. 27, at 1316 UTC (6:16 a.m. PST). The image shows a top-down-view of the rain intensity obtained from TRMM's sensors. Estimated rain rates range from 1 millimeter to 30 millimeters (.3 to 1.18 inches) per hour. TRMM is a joint mission between NASA and the Japanese space agency JAXA.

Durian was located near13.4 north latitude and 125.8 east longitude, or approximately 325 nautical miles east-southeast of Manila, Philippines. Durian has tracked westward at 10 knots (11.5 mph) over the past six hours. Maximum significant wave height generated from Durian is 39 feet in the open ocean.

The latest forecast from the U.S. Navy's Joint Typhoon Warning Center notes that the storm is currently at or near peak intensity and is expected to steadily weaken between 12 and 72 hours. That's because it is expected to make landfall in the Philippines and move into an area with dry air and wind shear (winds blowing a different direction) both of which weaken storms. Durian is forecast to cross near Manila then proceed toward Vietnam. Credits: Image - Hal Pierce, NASA GSFC; Caption - Rob Gutro, NASA GSFC 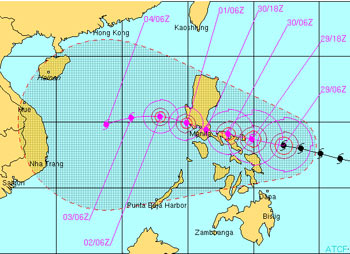 Click to enlarge
November 30 marks the official end of the Atlantic and Eastern Pacific hurricane seasons. While those two regions remain quiet, typhoons are still forming in the western Pacific. This is a forecast track from the U.S. Navy Joint Typhoon Warning Center through Dec. 1.

At 1:00 p.m. PST (2100 Zulu Time) on Nov. 28, Typhoon Durian was located near 12.8 degrees north latitude and 129.4 degrees east longitude, approximately 540 nautical miles east of Manila, Philippines. Durian has been moving toward the west-northwest at 15 knots (17 mph) in the previous 24 hours and continues to track that direction. Maximum sustained winds 86 mph (75 knots) with gusts to (103 mph) 90 knots.