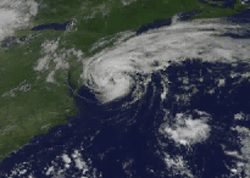 Beryl is moving toward the northeast near 21 mph (33 km/hr) and this motion is expected to continue with an increase in forward speed today. This motion could bring the center of Beryl near or over Nova Scotia tonight or Saturday. Storm total rainfalls of 1 to 2 inches are possible in Nova Scotia in association with Beryl.

Maximum sustained winds are near 50 mph (85 km/hr) with higher gusts. Slow weakening is forecast as beryl loses tropical characteristics during the next 24 hours. Tropical storm force winds extend outward up to 85 miles (140 km) from the center. The minimum central pressure reported by both an air force reserve hurricane hunter aircraft and Nantucket island is 1001 millibars.

Beryl's Effect on Nantucket Island, Mass. -- Beryl brought steady and driving rains to coastal Massachusetts. It made landfall over Nantucket Island, Mass. around 3 a.m. EDT according to the National Hurricane Center. No power outages were reported to authorities. The National Weather Service reported that the heaviest rainfall moved past the island by 3:20 a.m. EDT. According to one news report, waves on the southern shore of Nantucket reached six to ten feet on Thursday afternoon, July 20 as Beryl was approaching.

Nova Scotia, Canada Preparing for Beryl -- Environment Canada's (EC) Meteorological Service provides forecasts for all of Canada. On Friday morning, July 21, EC issued a Rainfall Warning for Nova Scotia as the remnants of tropical storm Beryl are expected to brush the Atlantic coast of Nova Scotia later in the day. Rainfall amounts of 30 to 50 millimeters (1 to 2 inches) are forecast across western portions of Nova Scotia. Rainfall amounts of 20 to 30 millimeters (.8 to 1 inch) are forecast over eastern sections. EC noted that it is possible rainfall warnings could be extended as the system tracks along the coast. Winds gusting up to 80 km/hr (50 mph) are forecast along the Atlantic coast with this system. For Nova Scotia's Forecast, visit on the Web: http://www.weatheroffice.ec.gc.ca/city/pages/ns-19_metric_e.html. 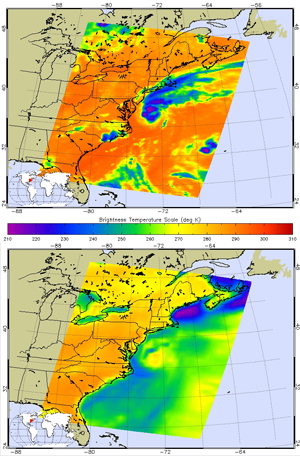 The National Hurricane Center noted that Tropical Storm Beryl was packing maximum sustained winds of 60 mph as it tracked north-northeast toward eastern Massachusetts on July 20, 2006.

The coordinates of Beryl's center at 2 p.m. EDT were 39.1 north and 72.6 west, and Beryl's minimum central pressure was 1002 millibars. At that time, Beryl was about 125 miles south-southeast of New York City and about 195 miles southwest of Nantucket, Massachusetts.

A tropical storm warning remains in effect for southeastern Massachusetts from Plymouth to Woods Hole, including Cape Cod, Nantucket island and Martha's Vineyard. Storm tides of 1 to 3 feet above normal tide levels are possible in the warning area. Storm total rainfalls of 2 to 4 inches are possible in association with Beryl. These rains extend well to the northwest of the center.

Top Image: This is an infrared image of Tropical Storm Beryl in the western Atlantic, from Atmospheric Infrared Sounder (AIRS) on NASA's Aqua satellite on July 20, 2006, 1:30 am local time. This AIRS image shows the temperature of the cloud tops or the surface of the Earth in cloud-free regions. The lowest temperatures (in purple) are associated with high, cold cloud tops that make up the top of the hurricane. The infrared signal does not penetrate through clouds. Where there are no clouds the AIRS instrument reads the infrared signal from the surface of the Earth, revealing warmer temperatures (red). This infrared image shows three large regions of strong convection surrounding the core of the storm. The largest, on the northern edge of the core, also appears in the companion microwave image to contain intense precipitation.

Bottom Image: The second image is created from microwave radiation emitted by Earth's atmosphere and received by the AIRS instrument on NASA's Aqua satellite. It shows where the heaviest rainfall is taking place (in blue) in the storm. Blue areas outside of the tropical storm, where there are either some clouds or no clouds indicate where the sea surface shines through. Credit: NASA/JPL. Caption Credit: Sharon Ray, NASA's Jet Propulsion Laboratory and NOAA/NHC. (+ Click to view larger version of top image | + Click to view larger version of bottom image)

The blue areas along the top of the clouds indicates cloud ice, while the wavy blue lines on the bottom center of the image indicate intense rainfall. Notice that the solid line along the bottom of the panel, which is the ground, disappears in this area of intense precipitation. It is likely that in the area the precipitation rate exceeds 30mm/hr (1.18 inches/hour) based on previous studies.

From one side of the storm to the other, Beryl appears to be approximately 800 km (497 miles). The scale from top to bottom is approximately 30 km (18 miles), so the clouds in this tropical storm reach heights exceeding 15 km (9 miles). + Cloudsat website

The National Hurricane Center reports that rains from Beryl were affecting Long Island, N.Y. and the southern New England coast at 11:00 a.m. EDT on Thursday, July 20.

Storm tides of 1 to 3 feet above normal tide levels are possible in the warning area. Storm total rainfalls of 2 to 4 inches are possible. These rains extend well to the northwest of the center. At 11:00 a.m. EDT the center of tropical storm beryl was located near latitude 38.8 north and longitude 72.7 west or about 150 miles south-southeast of New York City and about 220 miles southwest of Nantucket, Mass. Beryl is moving toward the north-northeast near 13 mph and this motion could bring the center of the storm near the southeastern coast of Massachusetts tonight (July 20) or Friday morning.

Tropical Storm Beryl, the second named storm of the 2006 Atlantic hurricane season, formed off the Carolina coast on July 18. 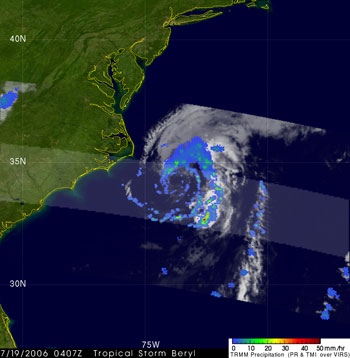 Beryl shows the classic signature of a tropical cyclone with rainbands (as shown in blue) spiraling around the center. However, TRMM also shows that Beryl does not have a well-developed eyewall with very little rain immediately surrounding the center. The lack of any strong convection near the center, which would show up in the rain intensities, indicates that Beryl is not poised to intensify at this time. The image was taken at 4:07 UTC (12:07 a.m. EDT) July 19, 2006. At the time of this image, Beryl was a weak tropical storm with maximum sustained winds reported at 40 mph by the National Hurricane Center.

The National Hurricane Center's (NHC) latest advisory at 11:00 a.m. EDT on July 19 noted that Tropical Storm Beryl is getting a little better organized and moving northward. The NHC discontinued the tropical storm watch for the eastern coast of North Carolina, as Beryl continues to track away from the mainland.

At 11:00 a.m. EDT on July 19, the center of Tropical Storm Beryl was located near latitude 35.6 north and longitude 73.7 west or about 105 miles (170 kilometers) east-northeast of Cape Hatteras, North Carolina. Beryl was moving toward the north near 9 mph. This general motion was expected to continue through the nighttime hours. The estimated minimum central pressure is 1004 millibars.

Maximum sustained winds are near 45 mph (75 km/hr) with higher gusts. Some strengthening is forecast during the next 24 hours. Tropical storm force winds extend outward up to 100 miles (160 km) mainly northeast through southeast of the center. On its current forecast path, the outer fringes of the storm could affect part of Long Island, N.Y. and extreme eastern Massachusetts early Friday, July 21. 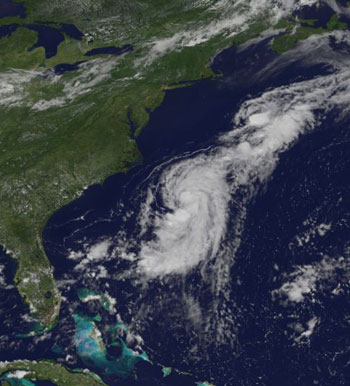 The second tropical depression of the Atlantic hurricane season was official as of 11:00 a.m. EDT on Tuesday, July 18, 2006, when the National Hurricane Center issued an advisory announcing its formation. Tropical Depression or "TD" #2 formed off the North Carolina coast. If the storm strengthens into a tropical storm with sustained winds 39 mph or greater, it will become Tropical Storm Beryl.

As of 11:00 a.m. EDT on July 18, the east coast of North Carolina from north of Cape Lookout northward to south of Currituck Beach Light., was under a Tropical Storm Watch. That means tropical storm conditions are possible in those areas in the next 36 hours.

This full-color image above was composed by overlaying Geostationary Operational Environmental Satellite (GOES) cloud imagery on top of a surface map created by data from the Moderate Imaging Spectroradiometer (MODIS) instrument that flies onboard NASA's Terra and Aqua satellites. This image was processed at 1:10 p.m. EDT (1710 UTC), and clearly shows TD #2 off the North Carolina coast as a big swirling mass of clouds. GOES is operated by the National Oceanic and Atmospheric Administration. This data was processed by NASA's GOES Project Science Office at the Goddard Space Flight Center, Greenbelt, MD.

During the morning hours on the 18th, the National Hurricane Center looked at NASA's QuikSCAT satellite data for a closer look at the circulating winds. QuikSCAT data revealed 20-25 knot winds (23-28 mph), and the "banding" or bands of clouds and winds have developed more since. Once forecasters saw that development, by 11:00 a.m. EDT, the National Hurricane Center officially upgraded the system to a tropical depression.

Where Exactly is TD#2?

At 2:00 p.m. EDT the center of TD#2 was located near latitude 32.8 north and longitude 73.4 west or about 210 miles (340 kilometers) south-southeast of Cape Hatteras, North Carolina. The depression is moving toward the north near 5 mph. A slow turn toward the north-northwest or northwest is expected to occur later tonight or Wednesday. The estimated minimum central pressure is 1011 millibars. Maximum sustained winds are near 35 mph (55 km/hr) with higher gusts. Some strengthening is forecast during the next 24 hours and the depression could become a tropical storm later today or tonight. Credit: NASA GOES Project. Caption: Rob Gutro, NASA GSFC.
Rob Gutro
Goddard Space Flight Center
› Back To Top