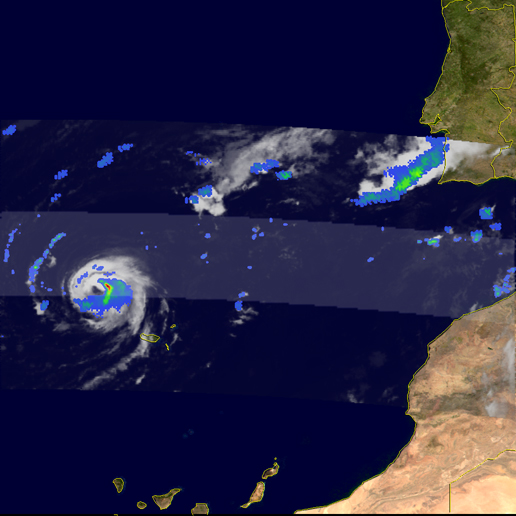 The incredible 2005 Atlantic hurricane season continues on. With more than a month still left to go in the official 2005 hurricane season, along comes Vince, the 20th named storm of the season and the first tropical cyclone on record to make landfall in Spain. Vince formed on the 9th of October 2005 as a tropical storm in a very unusual location, the far eastern Atlantic southeast of the Azores. Vince originated from a midlatitude low pressure system that became tropical in nature. Vince actually reached hurricane intensity for a period according to the National Hurricane Center (NHC) as it was passing north of the Madeira Islands. Vince moved east-northeast and weakened into a depression before hitting the southwest coast of Spain close to Portugal on the 11th.

The Tropical Rainfall Measuring Mission (TRMM) satellite captured this unique image of Hurricane Vince at 22:16 UTC (6:16 pm EDT) on 9 October 2005 when it was northwest of the Madeira Islands. It shows the horizontal distribution of rain associated with the storm (looking down) as viewed by the TRMM satellite. Rain rates in the inner swath are from the TRMM Precipitation Radar (PR), the only radar capable of measuring rainfall from space. Rain rates in the outer swath are from the TRMM Microwave Imager (TMI). The rainfall pattern is overlaid on infrared (IR) data from the TRMM Visible Infrared Scanner (VIRS). TRMM shows that Vince is a small storm with a limited rain field. The bulk of the small area of rain associated with Vince is located east and south of the center. However, a band of moderate (green) rain with a localized area of heavy rain (red areas) lies just to the east of the center and partially wraps around it. At the time of the image, Vince was a minimal Category 1 hurricane with maximum sustained winds estimated at 75 mph by NHC.