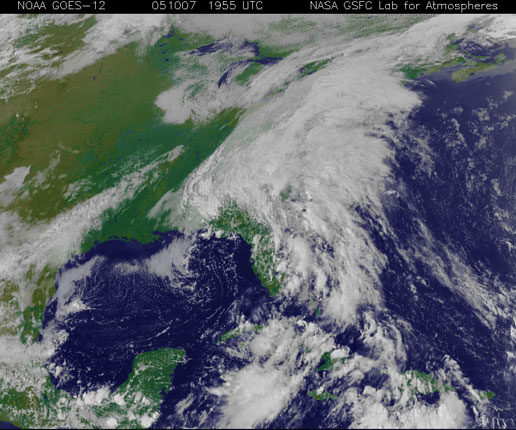 Tropical Storm Tammy started her life quickly off the coast of Florida on Wed. October 5, and as of Friday, October 7 is raining on much of the U.S. east coast now that she's merging with an approaching cold front.

This image is from the National Oceanic and Atmospheric Administration's GOES-12 satellite. It was taken at 1945 UTC (3:45 p.m. EDT), on Friday, Oct. 7, 2005. The image was processed at the NASA Goddard Space Flight Center Laboratory for Atmospheres in Greenbelt, Md.

Heavy Rains in the Baltimore/Washington Corridor

According to reports at 3 p.m. EDT from the National Weather Service out of Baltimore, Md. and Washington, D.C., tropical moisture continues to spread over that region and will for another 24 hours. The cold front is approaching from the west and moving very slowly eastward, feeding more moisture into the area. Forecasters expect the heavy rains in the Baltimore/Washington area to taper off Saturday afternoon. Already, 3 to 5 inches of rainfall have been observed, mostly west of a line from Westminster, Md. (west of Baltimore), south to Dulles airport. Forecasters say that another 2-4 inches of rain are still possible by Saturday afternoon, and Flood Watches are up.

Tammy's rains integrated into the approaching cold front are expected to soak some of the New England states. A flood watch remains in effect from 6 p.m. EDT, Friday, Oct. 7 through late Saturday night, Oct 8 for Connecticut, Rhode Island, Massachusetts, and southern New Hampshire.

An area of heavy rain is forecast to move into southern New England Friday night and linger across the area on Saturday. Rainfall amounts of 2 to 5 inches are possible through Saturday night. The heaviest amounts are expected across the Connecticut and Merrimack river basins.

Following are some rainfall totals according to the National Weather Service from Tammy through 8 a.m. EDT on Friday, October 7, 2005: 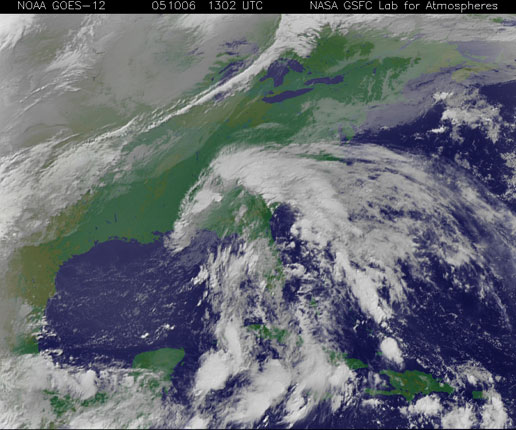 This image of Tropical Storm Tammy is from the National Oceanic and Atmospheric Administration's GOES-12 satellite. It was taken at 1302 UTC (9:02 a.m. EDT), on Thursday, Oct. 6, 2005. The image was processed at the NASA Goddard Space Flight Center Laboratory for Atmospheres in Greenbelt, Md.

As of 8 a.m. EDT, on Oct. 6, Tammy continued her inland track into Georgia, and her winds, although near 40 mph, were beginning to diminish. At that time, Tammy's center was estimated near latitude 31.8 north and longitude 84.5 west. That puts Tammy's center near Albany, Ga.

Most of Tammy's strongest winds and heaviest rains remain well to the north and the east of Tammy's center, and are still affecting the coastline. Tropical storm force winds extend outward up to 200 miles to the northeast from the center.

Tammy is moving toward the west-northwest near 14 mph, and is expected to slow down. The circulation of the storm is expected to dissipate within 24 hours. The minimum central pressure is 1005 millibars or 29.68 inches.

Tammy was "born" on Wed. Oct. 5 off the Florida coast. The first report from the National Hurricane Center in Miami, Fla. at 7:30 a.m. EDT placed her 20 miles east of Cape Canaveral, Fla. 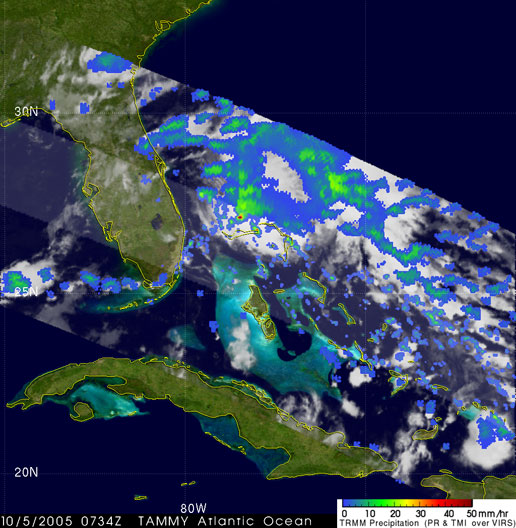 This image was taken by the Tropical Rainfall Measuring Mission (TRMM) satellite at 07:34 UTC (3:34 am EDT) on 5 October 2005 and shows an area of disturbed weather just off of the Florida coast over the northern Bahamas that was about to become Tropical Storm Tammy, the 19th named storm of the 2005 Atlantic hurricane season. The image shows a top-down-view of the rain intensity obtained from TRMM's sensors. Rain rates in the center portion of the swath are from the TRMM Precipitation Radar (PR), a radar designed to measure precipitation from space. Rain rates in the outer swath are from the TRMM Microwave Imager (TMI). The rain rates are overlaid on infrared (IR) data from the TRMM Visible Infrared Scanner (VIRS). Credit: Image GSFC, Caption Steve Lang