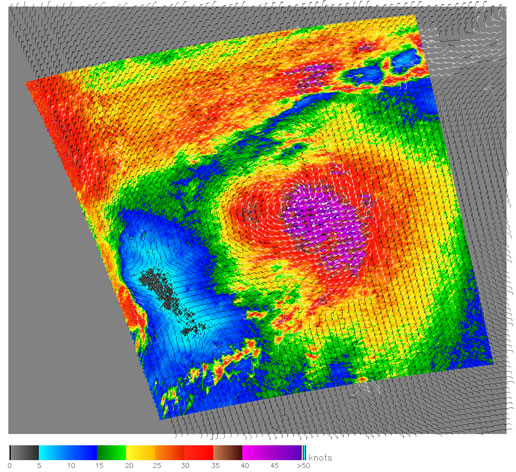 The image depicts wind speed in color and wind direction with small barbs. White barbs point to areas of heavy rain. The highest wind speeds, shown in purple, surround the center of the storm.

Measurements of the wind strength of Hurricane Maria show sustained winds slightly higher than those shown by QuikSCAT observations. This is because the power of the storm makes accurate measurements difficult. The scatterometer sends pulses of microwave energy through the atmosphere to the ocean surface, and measures the energy that bounces back from the wind-roughened surface. The energy of the microwave pulses changes depending on wind speed and direction, giving scientists a way to monitor wind around the world.

Tropical cyclones (the generic term for hurricanes and typhoons), however, are difficult to measure. To relate the radar energy return to actual wind speed, scientists compare measurements taken from buoys and other ground stations to data the satellite acquired at the same time and place. Because the high wind speeds generated by cyclones are rare, scientists do not have corresponding ground information to know how to translate data from the satellite for wind speeds above 50 knots (about 93 km/hr or 58 mph). Also, the unusually heavy rain found in a cyclone distorts the microwave pulses in a number of ways, making a conversion to accurate wind speed difficult. Instead, the scatterometer provides a nice picture of the relative wind speeds within the storm and shows wind direction. + High resolution image. Credit: NASA image courtesy the QuikSCAT Science Team at the Jet Propulsion Laboratory 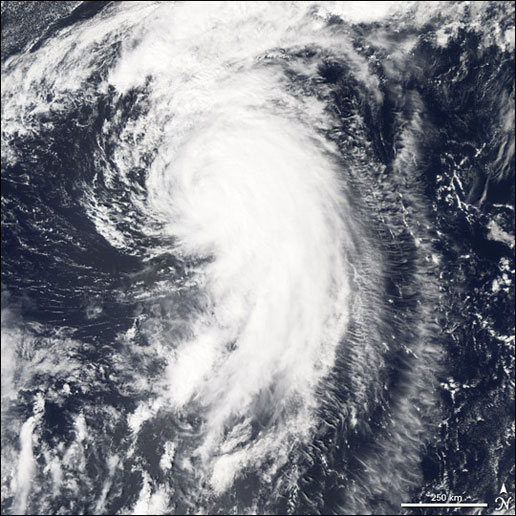 Hurricane Maria is spinning north over the Atlantic Ocean, well away from land. The storm reached its maximum intensity on September 6, 2005, several hours before the Moderate Resolution Imaging Spectroradiometer (MODIS) on NASA’s Aqua satellite captured this image at 1:45 ADT (16:45 UTC). At this time, the storm had winds of about 160 kilometers per hour (100 miles per hour) with gusts to 195 km/hr (120 mph), down from its previous intensity of 185 km/hr (115 mph) with gusts to 220 km/hr (140 mph). Maria is expected to continue to weaken as it moves north. It is not forecast to affect land. + Click for high resolution image. Credit: NASA image created by Jesse Allen, Earth Observatory, using data provided courtesy of the MODIS Rapid Response team. 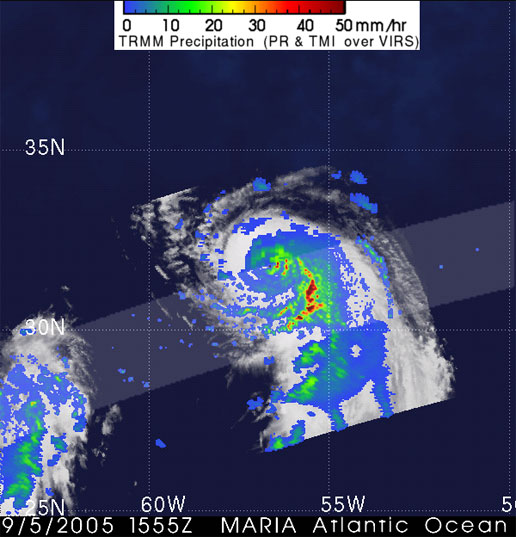 This image of Hurricane Maria was taken by the Tropical Rainfall Measuring Mission or TRMM satellite as Maria was moving northward in the central Atlantic. The image was taken at 15:55 UTC (11:55 am EDT) on 5 September 2005. The image shows a top-down view of the rain intensity within Maria as revealed by TRMM. Rain rates in the center of the swath are from the TRMM Precipitation Radar (PR), which can measure precipitation from space. Rain rates in the outer swath are from the TRMM Microwave Imager (TMI). The rain rates are overlaid on infrared (IR) data from the TRMM Visible Infrared Scanner (VIRS). Several rain bands surround the center. The rain bands bend sharply around the center, which indicates that the storm has a well developed circulation. The center is on the edge of the PR swath and is visible the nearly closed ring of moderate intensity rain (green areas). At the time of this image, Maria was a Category 2 hurricane with maximum sustained winds reported at 85 knots (98 mph) by the National Hurricane Center. The storm is not expected to pass near land. The precursor to Hurricane Nate is visible as the mass of clouds and rain southwest of Maria (in the lower left corner). Credit: NASA/Hal Pierce (SSAI/NASA GSFC) and caption by Steve Lang (SSAI/NASA GSFC).
› Back To Top