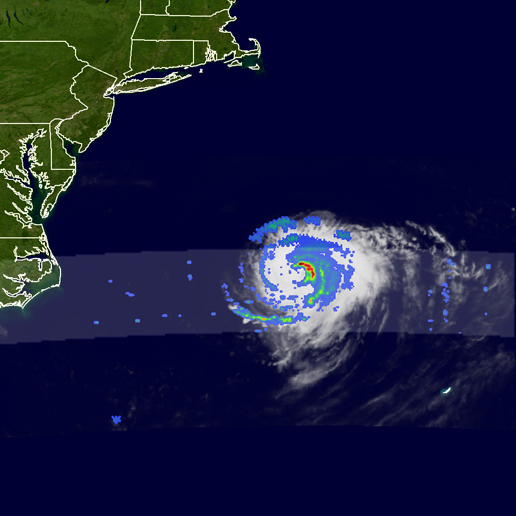 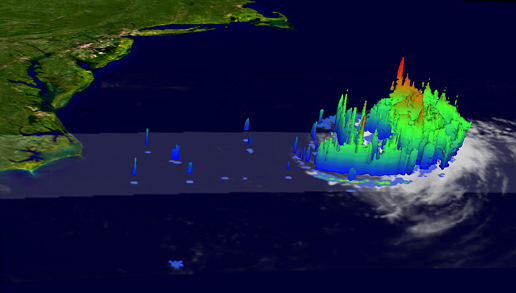 Just as Irene was finally strengthening into a hurricane, it veered north and east, sparing the US East Coast. Irene continued the record fast pace of the 2005 hurricane season, becoming the earliest 9th named storm, well before peak season in September. Irene was also a Cape Verde storm, just like Emily, originating west of the Cape Verde Islands in the central Atlantic. Storms typically do not form this far east so early in the season as water temperatures in the region are usually not yet warm enough. However, this year this part of the Atlantic has been much warmer than normal early in the season.

After forming into a tropical depression on the 4th of August 2005 in the central Atlantic, Irene moved in a general northeast direction. Unable to intensify because of shear and dry air, the storm moved along as a depression or a weak tropical storm for several days. Irene began to approach the US East coast on the 12th, having passed south of Bermuda, as a moderate tropical storm. Irene became a strong tropical storm on the 13th with maximum sustained winds reported at 70 mph by the National Hurricane Center and began to turn more northward as a result of a weakness in the subtropical ridge west of Bermuda. The next day on the evening of the 14th, Irene finally reached hurricane intensity with maximum sustained winds of 80 mph.

Since its launch back in the fall of 1997, the Tropical Rainfall Measuring Mission (TRMM) satellite has been providing valuable images and information on hurricanes and tropical cyclones over the Tropics. TRMM is a joint mission between NASA and the Japanese space agency JAXA. TRMM captured the above images of Irene at 05:43 UTC (1:43 am EDT) on 15 August 2005 soon after it became a hurricane.

The first image shows the horizontal distribution of rain intensity within the storm (top down view) as viewed by the TRMM satellite. Rain rates in the inner swath are from the TRMM Precipitation Radar (PR), the only radar capable of measuring rainfall from space. Rain rates in the outer swath are from the TRMM Microwave Imager (TMI). The rainfall pattern is overlaid on infrared (IR) data from the TRMM Visible Infrared Scanner (VIRS). TRMM shows that Irene is in the process of forming an complete eye. At this time, a well-defined partial eye wall is identifiable by the green and red semicircle. The outer rainbands show good banding (green arcs), a good indication of a well-developed circulation. The rain field is asymmetric with the bulk of the rain remaining on the eastern side of the storm (blue area), while a well-defined area of intense rainfall (red area) lies in the northeastern portion of the eyewall. This intense rain near the center of Irene is a good indication the storm will try to strengthen. As water vapor condenses into the cloud droplets that produce rain, heat is released. This heat, known as latent heat, is what drives the storm's circulation and is most effective when it is released near the core of the storm.

The second image was taken at the same time and shows the height of the precipitation columns within Irene (defined by the 15 dBZ isosurface). It shows that the intense rain visible in the previous image is associated with an area of deep convection at denoted by the taller red towers. The tallest tower is about 17 km high. These high towers can be a sign of future strengthening as was the case here. Irene intensified to 80 knots (92 mph) later on the 15th, before starting to weaken as the system moved over cooler waters and began to encounter westerly wind shear. 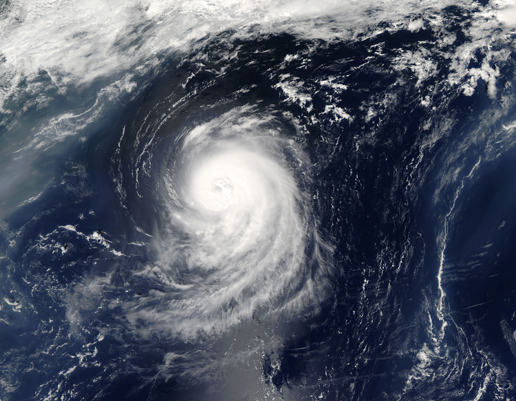 Irene was a Category 1 storm with sustained winds of 150 kilometers per hour (90 miles per hour) and stronger gusts when the Moderate Resolution Imaging Spectroradiometer (MODIS) on NASA’s Aqua satellite captured this image on August 15, 2005. The third hurricane of the 2005 Atlantic season, Irene is not expected to threaten land.

While Hurricane Irene may not affect the United States or Canada, it is having an effect on haze over the Atlantic Ocean. Hot, humid weather in the Mid-Atlantic states has allowed pollution to build up. As the haze flows out to sea, it is encountering Hurricane Irene, which is steering the haze in a wide circle around its northern edge. 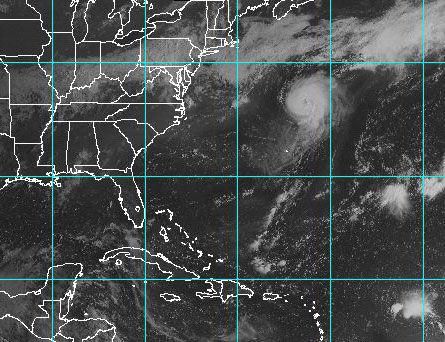 Click this image to view an animation of Irene from NOAA/NESDIS, Image credit: NOAA
At 4 a.m. ET on August 16, Hurricane Irene was weakening slightly as it moved eastward over the north Atlantic. At that time, the center of hurricane Irene was located near latitude 36.7 north and Longitude 63.5 west or about 875 miles (1405 km) southwest of Cape Race Newfoundland, Canada. This is an animation generated from images from the National Oceanic and Atmospheric Administration's Geostationary Operational Environmental Satellite (GOES).

This animation comes in two parts. The first part, where the image is somewhat grainy and blurred is taken at night time, using an infrared sensor that captures heat. Irene is seen as the rotating circle in the middle of the animation. Once daylight arrived, the picture is captured in visible light and the details of the clouds become sharp and clear. In the top left hand corner of this animation, you can see the outline of Massachusetts.

Irene was moving toward the east near 9 mph (15 km/hr) and the motion was expected to continued through the day, with a gradual turn to the east-northeast expected by nightfall.

Irene's maximum sustained winds were near 85 mph (140 km/hr) with higher gusts. Some weakening was forecast during the next 24 hours. 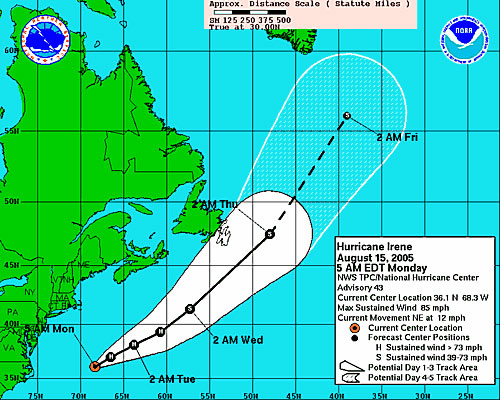 Hurricane forecasters were checking various data from NASA satellites to study Hurricane Irene's location and tweak their forecast for their report that was issued at 4 a.m. ET on August 16.

To see where Irene may go next, forecasters are looking at an elongated area of low pressure, called a trough, over the Great Lakes and Ohio Valley region. That trough is expected to move quickly eastward and push Irene to the northeast by 36 hours. Between 36-48 hours, Irene is expected to become a powerful extratropical low pressure system as she moves eastward. Once Irene hits the icy waters of the north Atlantic in about 48 hours, any remaining tropical characteristics should quickly disappear. Caption credit: Adapted by Rob Gutro, NASA Goddard Space Flight Center, Greenbelt, Md. from the National Hurricane Center's site. 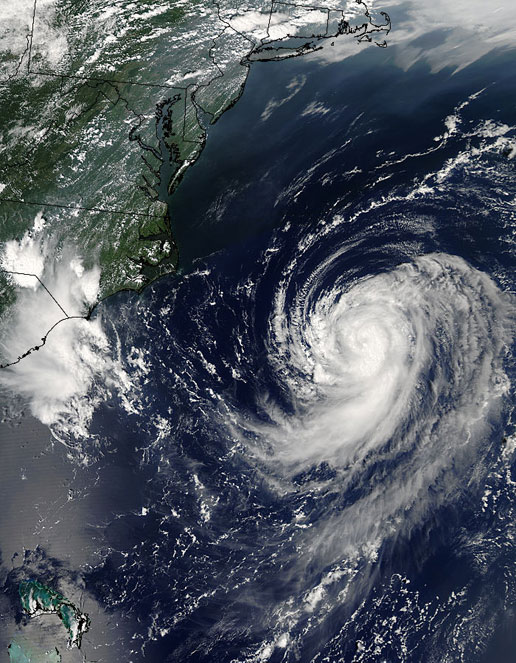 Irene was building towards a hurricane when the Moderate Resolution Imaging Spectroradiometer (MODIS) on NASA’s Aqua satellite captured this image at 2:20 p.m. U.S. Eastern Daylight Savings Time on August 14, 2005. By 11 p.m., Irene had become the third hurricane of the 2005 Atlantic hurricane season. The storm is moving northeast along the east coast of the United States and is not expected to make landfall, by National Hurricane Center predictions.

Along the top of the image, a pall of haze hugs the coast, blowing out over the Atlantic over the Chesapeake Bay. Such haze develops when hot, muggy weather caused by a high pressure system traps stagnant air. Emissions from cars and power plants build up, leading to hazy skies. The U.S. Environmental Protection Agency’s AirNow web site warned that air quality levels in the Mid-Atlantic states would be unhealthy for sensitive groups to unhealthy for all groups on August 13. Clearly, haze continued to affect the region on the following day. + High resolution image 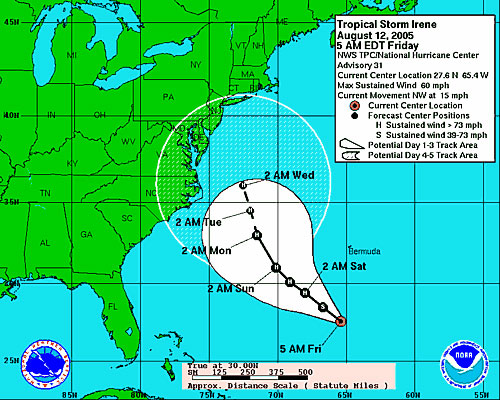 This display shows an approximate representation of coastal areas under a hurricane warning (red), hurricane watch (pink), tropical storm warning (blue) and tropical storm watch (yellow). The orange circle indicates the current position of the center of the tropical cyclone. The black line and dots show the National Hurricane Center (NHC) forecast track of the center at the times indicated. The letter inside the dot indicates the NHC's forecast intensity for that time.

It is also important to realize tropical cyclones are not a point. Their effects can span many hundreds of miles from the center. The area experiencing hurricane force (one-minute average wind speeds of at least 74 mph) and tropical storm force (one-minute average wind speeds of 39-73 mph) winds can extend well beyond the white areas shown enclosing the most likely track area of the center. The distribution of hurricane and tropical storm force winds in this tropical cyclone can be seen in the Cumulative Wind Distribution graphic displayed. 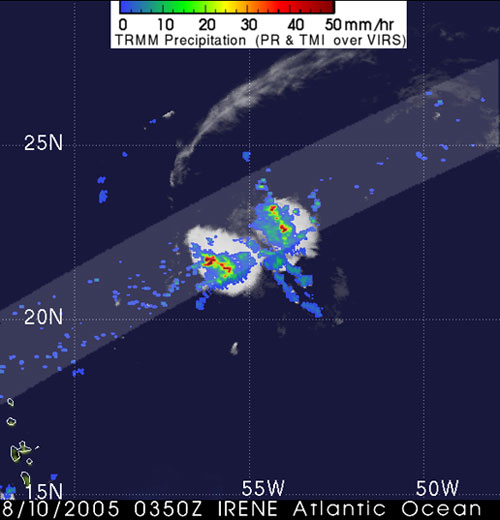 This image of Tropical Depression Irene was taken by the Tropical Rainfall Measuring Mission (TRMM) satellite as Irene continued its slow westward track across the central Atlantic Ocean. The image was taken at 03:50 UTC on 10 August 2005 (11:50 pm EDT 9 August 2005) when Irene was northeast of the Leeward Islands (visible in the lower-left). The image provides a top-down view of the rain associated with Irene as detected by the TRMM satellite. Rain rates in the center of the swath are from the TRMM Precipitation Radar (PR), which is able to measure rainfall from space. Rain rates in the outer swath are from the TRMM Microwave Imager (TMI). The rain rates are overlaid on infrared (IR) data from the TRMM Visible Infrared Scanner (VIRS). The center of Irene is hard to distinguish as the system is still poorly organized. At the time of this image, Irene was a tropical depression with maximum sustained winds estimated at just 35 mph by the National Hurricane Center and was moving due west at 10 mph. Credit: NASA Caption Credit: Steve Lang 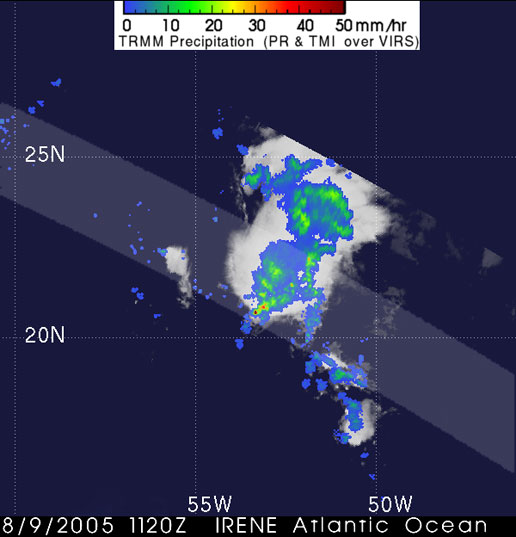 Image Above: The Tropical Rainfall Measuring Mission (TRMM) satellite captured this image of Tropical Depression Irene at 11:20 UTC (7:20 am EDT) on 9 August 2005 as it was moving westward across the central Atlantic Ocean. The image shows a top-down-view of the rainfall within Irene as obtained from TRMM's sensors. Rain rates in the center of the swath are from the TRMM Precipitation Radar (PR), the only radar capable of measuring precipitation from space. Rain rates in the outer swath are from the TRMM Microwave Imager (TMI). The rain rates are overlaid on infrared (IR) data from the TRMM Visible Infrared Scanner (VIRS). At the time of this image, Irene was just a tropical depression with sustained winds estimated at 30 mph by the National Hurricane Center. The system was moving west at near 12 mph. By Steve Lang, SSAI / NASA
Credit: NASA/JAXA 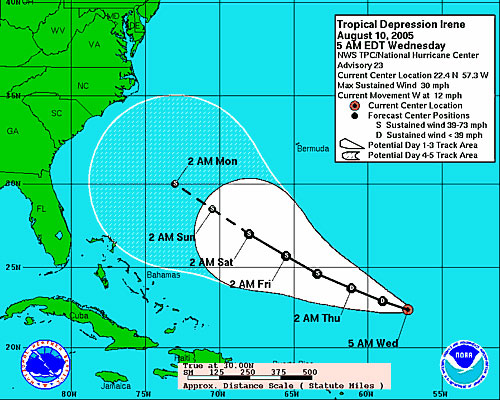 On Wednesday, August 10, 2005 at 10 a.m. Eastern Time (ET), the National Hurricane Center (NHC) said that Tropical Depression Irene's center is a little hard to determine based on the satellite images of cloud cover. However, to get a better fix on Irene's center, in addition to using pictures from the GOES satellite, the NHC used NASA's Tropical Rainfall Measuring Mission (TRMM) satellite's microwave imager and NASA's QuikSCAT scatterometer, which looks at winds.

They determined that a flow of air from the north, in the mid-levels of the atmosphere is producing some "shear," which is winds that weaken storms. That air flow is also bringing some very dry air into Irene. However, the warm sea surface temperatures and air flowing out of the storm is expected to allow for slow intensification. According to the forecast discussion on the National Hurricane Center web site, it is possible that Irene could reach hurricane strength before the end of the forecast period which ends on Monday, August 15.

Irene's estimated minimum central pressure is 1009 millibars or 29.80 inches, a change from 1010 millibars at 5 a.m. ET, indicating a little strengthening. The depression is moving toward the west near 10 mph (17 km/hr). For more information and further advisories, go to: http://www.nhc.noaa.gov. Credit: NHC/NOAA